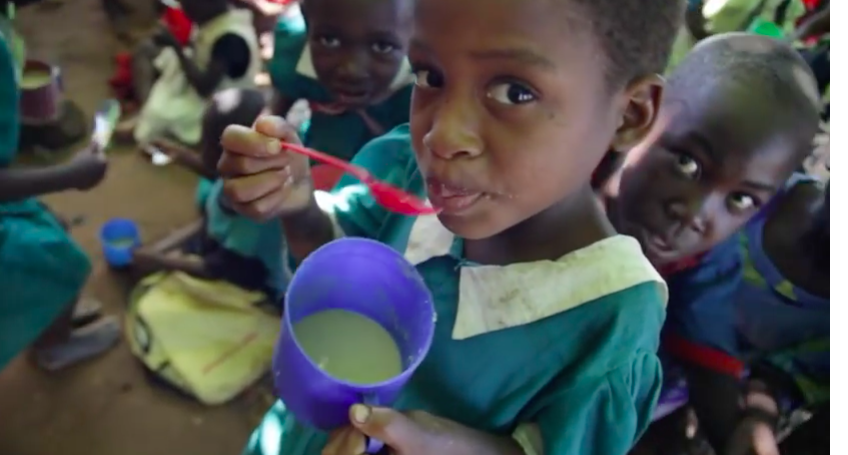 Clear Water students were very creative and generous in raising money for starving kids in Africa through various initiatives. One child offered birthday presents, and another First Communion presents, raising $1,370 between the two of them alone.

The child wrote: “I have decided instead of receiving presents for my birthday that I [want] Mary’s Meals to be able to help children who don’t have enough to eat and are hungry. I hope this donation helps.”

The Kindergarten class painted nativity scenes and angels made from fingerprints and handprints, and then made then into Christmas cards that families could buy, raising $215. The grade two class sold Freezies (a Canadian brand of popsicle) and raised $260. The fourth grade boys’ class did a bottle drive and raised $216. 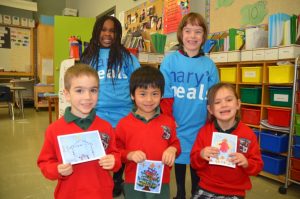 Three times in the last few years, Clear Water Academy has run a blue day where you can wear blue clothes instead of a uniform for $2 donation, and through this they have raised over $14,000. On one of these fundraising days, the founder of Mary’s Meals, Magnus MacFarlane-Barrow, visited the school for a talk that day. He is inspired by his Catholic faith but has also received secular praise like being named a “Top 10 Hero” by CNN.

In October 2017, Clear Water had an Oatmeal day served by the school community in conjunction with Mary’s Meals World Porridge Day, raising another $2,755.

Through all these combined small efforts, Clear Water has raised over $17,000 over the past few years, which provides over 1000 kids a year of meals each, since Mary’s Meals averages $16 a year to feed a kid one meal a day. 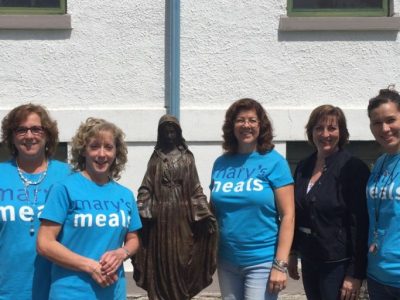 Clear Water’s affiliation with the charity began in April of 2016 with Adele Taylor seeing with a flyer promoting a documentary film on Mary’s Meals. Reading through an 8-page flyer, she got excited and convinced two friends and coworkers at Clear Water to view the screening of this documentary in a local theater. The three of them were moved enough to present it to the entire school.

Adele Taylor proclaimed, “I have felt a personal attraction to this wonderful organization, and I am so happy to have been responsible for bringing it to so many people’s attention through Clear Water Academy and beyond.”

Mary’s Meals’ goal is to “feed every child a daily meal a day in their place of education.” They always work to buy and prepare food locally which helps the local economy as well as providing needed nutrition for kids. Mary’s Meals featured Clear Water on their website along with a few other Canadian schools.

The powerful story of Mary’s Meals and what they do can be seen in this video.