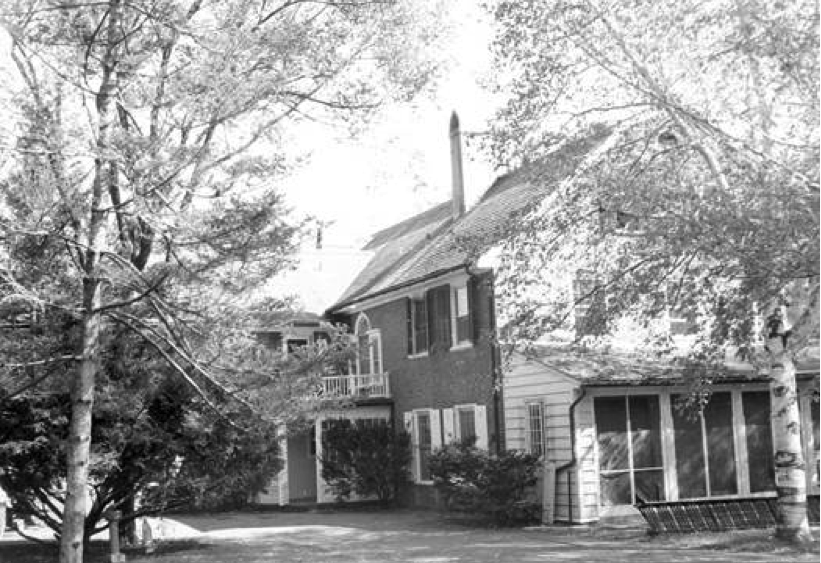 How the First Novitiate of the Legion of Christ in America Was Born: 50th Anniversary of the Foundation of the Novitiate in the United States. 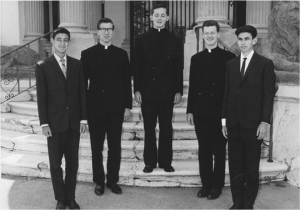 On May 1st , 1965, fifty years ago, the Novitiate of the Legion of Christ was founded in the United States. The steps taken to arrive at this important event in our history are contained in a letter written on May 6th by the first instructor of Novices, Fr. Ramiro Fernández, L.C. and are preserved in the historical archive.

Fr. Ramiro was just ordained in December of the previous year (1964), and his first assignment was that of instructor in the new foundation. At that time, the Legion already had for a year, a house of apostolate in the archdiocese of Hartford, and the project of the foundation of the Novitiate had already matured. Fr. Ramiro arrived from Madrid at John F. Kennedy airport in New York, on April 21st . He brought with him a tabernacle and some candels for the chapel. The next day, two Novices from the Novitiate in Ireland arrived to help in the new center of formation. One of them was Fr. David Owen, L.C.

On April 23rd , Fr. Ramiro, accompanied by the two Irish Novices, celebrated Mass in the airport chapel. Afterwards, they stopped in Bridgeport, in order to make some necessary purchases: two beds (out of which they made four), blankets, sheets, plates and other dining utensils. Their first job was repairing the house, which was called Villa Rosa, and was situated on 33 Abigail Street, Woodmont, Connecticut. The following day, April 24th , they celebrated Mass in the Catholic church of Woodmont, and they had an appointment with the vicar general of Hartford, Mons. John Francis Hackett (1911-1990), who was the auxiliary bishop of the diocese from 1953 to 1986. This American prelate received the first memebers of this small community favorably. Joining them on April 25th , were two Mexican postulants, among whom was Fr. Enrique Vizcaíno, L.C. The new postulants arrived from the apostolic school of Tlalpan in México City. 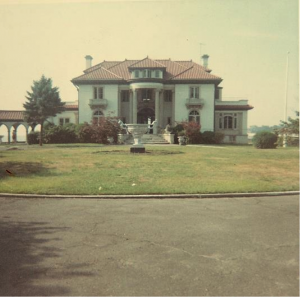 Fr. Jorge Bernal, L.C., rector of the first apostolic school at this time, sent with the postulants some purificators and other sacristy items. He also wanted to send, as a symbol, the ciborium used during the first years of the Legion in México. It was “a priceless gift”, as Fr. Ramiro called it in his letter. Thus, the ciborium used during the foundation Mass on Friday January 3rd , 1941, was the same that was used during the foundation in the United States. Fr. Bernal sent 300 pesos as well, and with this money they could buy the sanctuary candle. On the same day as the arrival of the postulants, they celebrated the first mass in the house of the Novitiate. In his letter, Fr. Ramiro underlines the importance of this event: “The house truly felt empty without the presence of our Lord in the tabernacle. But Finally, on a portable and temporary altar, we could celebrate here the Holy Mass, and have Christ living with us”. In the days following, the community moved forward in the preparation of the Novitiate: “The entrance to the house was continually full of boxes, packages, papers…we would get all of them out of the way and the next moment a truck would come with more things…”, recounts Fr. Ramiro. On April 30th , the Legionaries presented themselves to the archbishop of Hartford, Mons. Henry Joseph O’Brien (1896 – 1976), who participated in all the sessions of Vatican II in Rome from 1962 to 1965. Mons. O’Brien received the Legion of Christ in his diocese, of which he was bishop from 1945 to 1968. 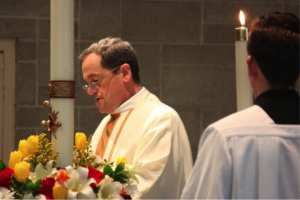 The Legionary Novitiate in the United States was officially founded on May 1st. It was the third Novitiate of the Congregation, after Salamanca and Ireland, and the first in the New World. The diary of the community indicates that it was the first Saturday of May, the month dedicated to the Holy Virgin, and it adds that on that day “the Legion spread her young arms, her great horizons were opened still further; the most cherished dreams of (…) all Legionaries were brought nearer the realization… And the Sacred Heart of Jesus Christ looking down from Heaven, surrounded by sorrows and pains at the plight of sinners in the world, was consoled and washed as the tiny seed of a Legionary Novitiate, an oasis of consolation, coolness of the world, where He may find warmness, loving reparation and praise, was planted in this vast country”. 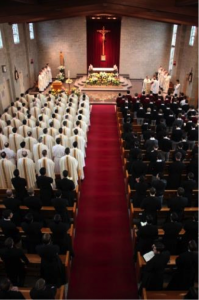 In order to celebrate these 50 years since the foundation, the Legionaries and the apostolics of the North American territory met in the center for Novitiate and Humanities in Cheshire from April 6th-9th. The principle theme of this encounter was spiritual fatherhood as a dimension that every Legionary is called to live at the service of the diverse branches of Regnum Christi and the Church.

On Tuesday of the Easter Octave, Fr. John Connor, L.C. presided over the Eucharistic celebration. In his homily, Fr. Edward Hopkins, L.C. spoke about the way in which Mary Magdalene was chosen by Christ to bring the message of the Resurrection to the Apostles, since she had experieinced the power of the mercy of God personally. “In the same way, each Legionary is a messenger renewed by the mercy of God and disposed to bring the message of God’s mercy to souls”, concluded Fr. Edward.

Wednesday, April 8th , was the day dedicated in a special way to the celebration of the 50th anniversary of the foundation of the Legion in the United States. Fr. Anthony Bannon, L.C. presided the Mass in the concelebration of 89 priests who exercise their ministry in the territory. In his homily, he stressed the necessity of cementing in Christ the advances and development of the Legion and the importance of creating new ways of evangelization by being faithful to the lines of work which the charism outlines for us and which God has confided to us for the service of the Church. 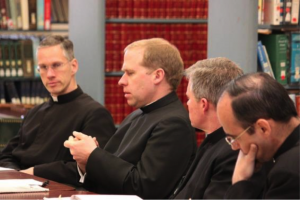 The get together concluded on Thursday, April 9th . Fr. Lorenzo Gómez, L.C. presided the Eucharistic concelebration. Throughout the day, Dr. Liza Klewicki gave conferences to the priests about the relevance of spiritual fatherhood in the world today. During the night, some of the Legionaries who have lived the most years in the territory, shared some reflections about the graces that God has given them, the Legion, and the Movement throughout these first 50 years in North America.

Fr. Eduardo Robles-Gil, L.C., our general director, wanted to make himself present in the get together by way of a video in which he thanks God for the gift of the Legion of Christ and the Regnum Christi Movement in North America, and also the Legionaries, consecrated and lay members of the Movement who have made possible the service in the Church in this country. He gave a special mention to all those who continue to build the Movement, and also to those who have accompanied us and now serve God in another way of life.

We thank the General Historical Archive for their collaboration in the preparation of this service of LaRed.