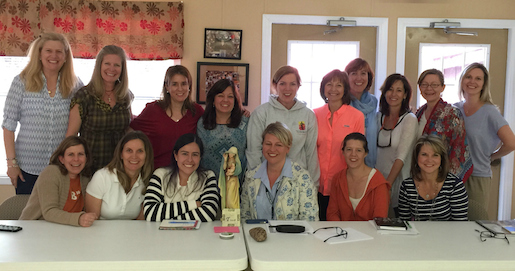 The official renewal of the lay branch began in late 2014 with a mixture of hope, expectation, commitment and perhaps a current of uncertainty for Regnum Christi members in North America. Four years after the Legion of Christ began its renewal under the Pontifical delegate, Velasio de Paolis, the term ‘renewal’ had become everyday language in Regnum Christi. Lay members watched their brother Legionaries (and soon after, sister consecrated women) meet, pray, discuss, debate, discern and develop new constitutions and statutes under the guidance of the Holy See. Accompanying them, supporting them, the first and second degree men and women reflected and allowed questions to come to the surface about their own identity in the Movement that could only be answered in prayer. This prayer was, in a sense, the beginning of their own process, a process that began formally and universally with the international Group Study which ran from October 2014 to April 2015.

More than 300 lay members, Legionaries and consecrated came together in Atlanta to pray, learn and be trained on how the journey the Holy See asked them to embark on would work. They received their road map, a four phase process:

first, a time of formation and illumination meant to increase the general membership’s understanding of themes important to the statutes
second, a phase of discernment and group discussion on the themes that would need to be discerned and clarified in the statutes defining the identity of the lay members
third, a territorial convention to be attended by elected representatives from local areas
and fourth, an international convention of elected representatives that would make a recommendation to the Holy See on the content of the statutes, based on the articulated discernment of the members themselves.

Members met in small groups and in local conventions over the next 6 months to discuss the themes of the identity, mission and vocation of the laity, the meaning of ecclesial movements and communion in the Church, and the history of the Charism of Regnum Christi. They studied the teachings of the Church, they listened to each other articulate how they had lived those themes in their own lives, and in the Movement. They discussed what elements of Church teaching they saw well expressed by Regnum Christi, and what areas they believed need to mature or improve. They equipped themselves with study, dialogue and prayer to become competent to make recommendations on the revision of the Movement’s governing statutes.

And the outcome? One member from Cincinnati relates that “we have a greater sense of the role of the laity and our true vocation as disciples of Christ, given to us at baptism, to live that out in temporal affairs. We also see more clearly how we all fit together as a spiritual family with priests and consecrated members of the Movement.”

From upstate New York, another member states that “my team has completed the third study [of the five-part series]. I cannot say enough about how beautiful they are. They summarize Church documents and teaching about the role of the laity, call to holiness, apostolate of the laity and how we fit in with the rest of the Church, etc. Love it…”

In Atlanta a group of 18 women finished the group study phase with the realization that “the joy of receiving and living a charism is unique and needs to be lived with gratitude, because the world needs it, the world needs the joy of Christ.” They affirmed that “we need to go forward in this renewal with courage, honesty and trust, exploring who God calls us to be, how to grow closer to him, and how to help others embrace his love and become apostles of joy.”

Going into phase 2, which will see the members discuss the concrete aspects of the statutes themselves and make recommendations on them through elected representatives in a territorial convention, Regnum Christi members recognize a deeper Christian maturity in each other, a deeper union with the Church and a deeper commitment to live out the words of Pope St John Paul II in his 1998 address to ecclesial movements,

“In our world, often dominated by a secularized culture which encourages and promotes models of life without God, the faith of many is sorely tested, and is frequently stifled and dies. Thus we see an urgent need for powerful proclamation and solid, in-depth Christian formation.

There is so much need today for mature Christian personalities, conscious of their baptismal identity, of their vocation and mission in the Church and in the world! There is great need for living Christian communities! And here are the movements and the new ecclesial communities: they are the response, given by the Holy Spirit, to this critical challenge at the end of the millennium. You are this providential response.”