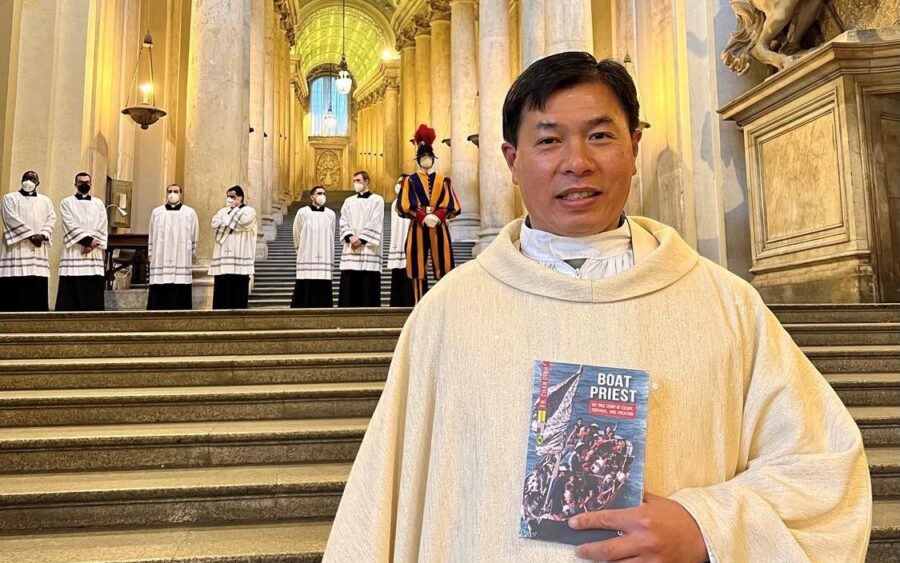 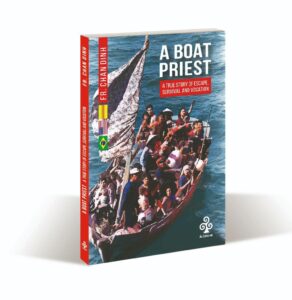 “Why did God spare my life and not the lives of others?”

“What does he want from me?”

These are the questions that Father Chan Dinh, LC, asked himself when he was just a young child living in a Thai refugee camp, and they are the same questions that would ultimately lead him to giving his life, many years later, to the priesthood through the Legionaries of Christ.

When Fr. Chan was only 8 years old, he and his family attempted a harrowing escape from his home country of Viet Nam across the Gulf of Thailand. The escape had been planned in secret by Fr. Chan’s mother, along with his older brother, who owned a small fishing boat; his mother would escape later only once all her children had safely fled the country. In the middle of the night, Fr. Chan and one of his brothers met other relatives who were also fleeing Communist Vietnam, and the group of about 20 people canoed out to the fishing boat that would ultimately enable their escape.

Thousands of Vietnamese people attempted to flee their country in the same way, and many of them did not survive. The fishing boats were often not seaworthy to begin with, or were overcrowded, being far too small for the number of passengers aboard. Boats that did manage to survive the hazardous conditions and dangerous storms were confronted by another very real and omnipresent threat to the unprotected boats; pirates frequently came aboard to steal what little valuables the refugees had managed to bring with them, often raping and killing the people on board before leaving the pillaged boat to sink without a trace.

After three perilous days at sea, the boat that carried Fr. Chan and his family arrived in Thailand, only to be looted by pirates when they arrived to shore. But as grateful as Fr. Chan was to have safely escaped from Vietnam, he knew that many of his relatives, including 15 of his cousins, had not. This awareness is what prompted him to ask the question that would ultimately inspire and shape his priesthood: “Why did God spare my life, and what does he want me to do with it?”

“These questions were prayers that I spoke to God often,” recalls Fr. Chan. “Little by little, I discovered the reason why God spared my life: to become a Legionary priest.”

After fleeing from Vietnam, Fr. Chan lived for months as a refugee in Thailand and the Philippines, before receiving definitive asylum in the United States, where he was eventually reunited with his mother and his siblings. He received his Bachelor of Science Degree in Mathematics at Cal State University in Los Angeles, and then joined the Legionaries of Christ in Cheshire, Connecticut. He is currently working towards obtaining his Master’s degree in Spiritual Theology in Rome, while stationed as a priest in Brazil.

It was here in Brazil where Fr. Chan decided to turn his remarkable life story into a book, called A Boat Priest: A True Story of Escape, Survival, and Vocation. In sharing the story of his escape and survival, and how this led to his vocation as a Legionary priest, with parishioners in various parishes throughout Brazil, Fr. Chan was encouraged by them to put the story into writing. After working as a missionary in Brazil for 14 years, Fr. Chan felt prompted to move forward with the book in a definitive way; while meditating on the Gospel of the Presentation of the Lord in the Temple, Fr. Chan felt the Holy Spirit not only confirming to him that this was the right moment to write his autobiography, but also enlightening him on the theme and outline of the book. This was on February 2, 2020, and the lockdown caused by the COVID-19 pandemic that began the following month gave Fr. Chan the space to begin the work of putting his story to paper.

Fr. Chan’s hope for the book is that it will help readers not only to understand the suffering that the Vietnamese people – and many others around the word – have endured at the hands of atheist communist regimes, but also to have an appreciation for the value of things like health, family, freedom, and faith, none of which Fr. Chan has ever taken for granted. “I hope that readers will appreciate their liberty, opportunities, and the freedom they have to practice their Catholic faith,” says Fr. Chan, “and I hope that young people can use my testimony to discover the plan of God for their own lives.”

And indeed, Fr. Chan’s book is already having an impact. He recently received a message from a 35-year-old man whose mother had given him a copy of the book:

“I am so deeply inspired and intrigued by your journey, your faith, and your dedication to Christ. I’ve questioned/lost my faith for almost 15 years. I still don’t know where I stand at the moment, but reading your book brings me closer to something. Thank you for writing the book.”

The book is dedicated to Fr. Chan’s mother, Maria Tam Dinh, to whom he owes his faith. Born into a Catholic family in North Vietnam in 1937, Maria went on to marry and have nine children, of which Fr. Chan is the youngest. Widowed at the age of 39, when Fr. Chan was only eight months old, Maria always woke at 5:30 AM and took her nine children to daily Mass before leaving for the rice fields where she worked every day, rain or shine. Unable to receive an education, she nevertheless possessed great wisdom, knowledge, and the virtue of courage to fight for the liberty of her family, all of which she attributed to an ardent life of prayer. “My mother, a widow, put her faith and trust in God to help her make courageous decisions that many others couldn’t make. Despite difficulties, sufferings, and separation from her family member for over 22 years, she knew that Divine Providence was never lacking.”

Fr. Chan’s book will soon be available in the Regnum Christi store! Watch your RC This Week Newsletter for details to come!