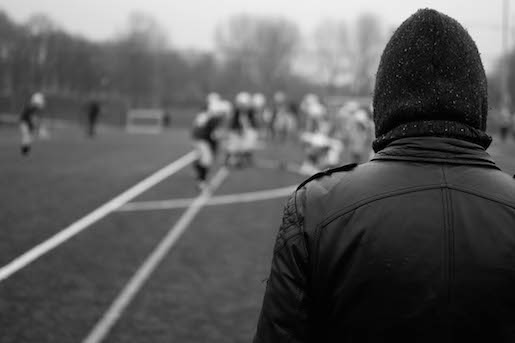 Do you not know that the runners in the stadium all run in the race, but only one wins the prize? Run so as to win. Every athlete exercises discipline in every way. They do it to win a perishable crown, but we an imperishable one. Thus I do not run aimlessly; I do not fight as if I were shadowboxing. No, I drive my body and train it, for fear that, after having preached to others, I myself should be disqualified. — 1 Cor 9:24-27

1. Fr Steven, are you really going to use a sports analogy for this discussion?
Absolutely! Using sports as an analogy goes back to St Paul. So, we can talk about getting into the end zone in football as being analogous to getting the end zone in life: Heaven. And in life, as in football, you can decide to go about things consistently or throw caution to the wind and gamble.

2. In football, the biggest gamble is the Hail Mary pass. Where does that term come from?
Well, I have to look this up in Wikipedia: It seems the term became widespread after a December 28, 1975 NFL playoff game between the Dallas Cowboys and the Minnesota Vikings, when Cowboys quarterback Roger Staubach (a Roman Catholic) said about his game-winning touchdown pass to wide receiver Drew Pearson, “I closed my eyes and said a Hail Mary.”

3. What is the Catholic spiritual life version of the Hail Mary pass?
It would be the deathbed conversion. Certainly they can happen, and they are beautiful when they do. It worked for the famous actor John Wayne, who had married a Catholic but never converted – until the very end. On May 14, 1979, Michael, Wayne’s son, asked his father if it would be okay to have Archbishop Marcos McGrath come and visit. Wayne said yes, and the two men spent an afternoon together talking. Wayne agreed that day to call for a priest before he died. Duke had often joked with his family that he was a “cardiac Catholic,” that at the last minute he’d call in a priest. Now he made that promise. Two days before he died, Wayne, in tremendous pain, agreed when his son Patrick asked him if they should call the priest now. “Yeah,” Duke said, “I think that’s a good idea.” Fr. Robert Curtis, UCLA Medical Center chaplain, arrived. He baptized the dying man, and administered last rites. That night, Wayne fell into a coma. “I don’t know the technicalities of the Church or what constitutes a conversion,” said Michael. “But Dad did die in the Church.”

4. What can we learn from that example?
Never give up praying for your loved ones…But nobody would put money on someone who chose the Hail Mary pass as their strategy! We need to consistently put that ball between the posts and past the goal line!

5. OK…so where do we start?
In football, it starts with a solid ground game, consistently blocking and moving the ball. The spiritual ground game is being in the presence of God. It means saying short simple prayers – maybe 50 a day – and keeping an ongoing conversation with God. It doesn’t have to be complicated: Glory Be, Hail Mary, Our Father – Lord Jesus have mercy on me!

6. There has to be more to it than that!
Absolutely! In football, you need a solid passing game, plays that can move the ball for big yardage. The spiritual passing game is the Eucharist. Life is different for the person who lives in the Eucharist: His soul is stronger. He is more like Jesus. He’s completing more passes. And finally that leads to some big plays!

7. And that’s it?
Not quite. In football, a successful team knows when it needs a time out to evaluate the situation and recharge. And in the spiritual life the time out from the rush of the secular world is essential.

8. What does a spiritual time out look like?
This is a time set aside for self-examination and reflection. There are three primary tools: confession, spiritual direction with a competent person who can help you discern God’s will in your life, and a retreat where you can get away from the world and, perhaps, have confession and spiritual direction. It is great if you can do this for a week, but for most people that is really difficult. So try a weekend, a day or even an evening. And if you can’t literally get away, look at the online retreats at the Regnum Christi Spirituality Center.