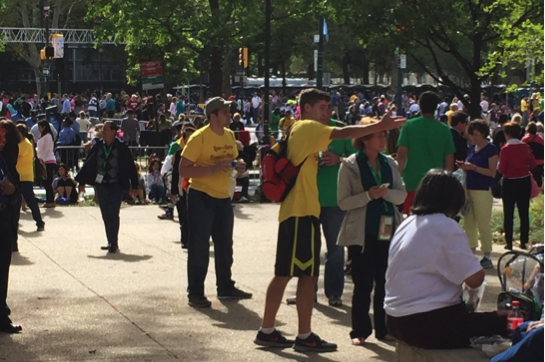 A group of 55 young men and families took on Pope Francis’ challenge to go out to the “peripheries” of the city and bring the joy of Christ to the poor of the streets of Philadelphia and to all those they encountered during the World Meeting of Families. For many of them, it was a new encounter, seeing the face of Christ in their neighbor.

These missionaries went out into the streets to find the poor, bring them food and clothing, listen to them & pray with them. They crossed the Benjamin Franklin Parkway and prayed over the area where nearly 1 million pilgrims would encounter the Pope, so that this experience would not just be one of curiosity and excitement, but of a profound encounter with our Lord. Some went into the crowds to invite anyone they met to receive the great mercy of our Lord through the sacrament of confession. Others went out to give out rosaries and evangelize with their joy among other pilgrims. But more so, we came together to share our own experience of the Lord in our own lives, being a source of strength and grace for each other. 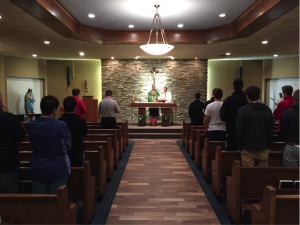 In these three days Christ taught us that all He desires are hearts who love Him and are willing to take the risk to bring that experience of love to others. Then…He will work his miracles in them and us.

Here is a little Journal of our Pilgrimage:

We began the morning at Royalmont Academy in Mason, OH with the sacrifice of the mass before setting out on a 10 hour trek to Philadelphia. Arriving at Philadelphia about 4:30 in the afternoon, we were able to make it to the Regnum Christi Holy Hour at the Cathedral downtown where our Lord would prepare our minds and hearts for what we were about to encounter in these next days.

After we arrived, we stopped at “The Philo”, a Catholic Club created in 1850. There we listened to short conferences & bands, ate Philly Cheesesteak sandwiches, and played billiards. It was a relaxing way to end the first night. Waking up early in the morning, we set out by bus into center city to meet over 250 other missionaries at St. Andrew Lithuanian Parish. We would begin with Holy Mass followed by a conference by Christopher West, who spoke about the virtue of Hope. If we as missionaries are to give people that hope, we must also “smell” like Christ giving them the hope of being able to encounter him in their lives. (picture archive)

We would then take to the streets, bringing food and clothing to the poor south of the Parkway. Each of the missionaries went out and encountered individuals in their own personal situations and needs and through them were able to give these people hope. They not only went to the poor, but offered their prayers for the military personel who were providing security for the event, for families passing through the plaza, and for each other.

Around lunchtime, we took off to pray over the entire grounds where pilgrims would wait for the Holy Father. It was incredible and inspiring to see how these young men desired to pray for all these people and dedicate their day to this mission. At the end of the day we were able to see the relics of St. Maria Goretti, whose remains were brought to the United States and were in placed in a local parish for veneration.

That first day would end with a blast…literally. Two blocks from the Church, I was driving the bus and took the curb too sharply, and blew out a tire. Not only that, but we were working against the clock to avoid getting stuck behind the barricades which would close Center city to vehicles at 10:00 pm. More tragically, we had hot pizza waiting for us at the hotel!!! But this moment allowed the young men time they found they needed to talk about their experience and didn’t put a damper on their day at all. Luckily, we had another mini-bus that came to pick us up…with the pizza delivery! This day would be the day we would be able to meet the Holy Father for the first time, but the missions were far from over. We began the morning with our Lord in the Eucharist at the same parish, and, after a talk by Dave Sloan who organized these missions, we would set out for the Parkway. An interesting note on Dave Sloan: He at one moment was a poor man curled up in a ball on the streets. He would now be the man that would encourage us to show the love and hope that comes from Christ to all those in the streets of Philadelphia.

The missionaries gave out rosaries to the crowds, invited them to the sacrament of confession and tried to find good place among the crowds to get a glimpse of the Holy Father!

When Pope Francis came down very quickly through the parkway we were only able to see him for a brief second as he arrived at the Festival of Families. For us, what was exciting was when he decided to put away his notes and speak to us with passion about the family. I really encourage you to watch this video of our Holy Father speaking to us about the family with such vigor and joy!

On arriving at the Parkway, each one of us looked for the perfect spot to be able to see our Holy Father and participate with him in the mass. AND WHAT A MASS! When you see the recollection and reverence of our Holy Father, he lifts us into that same mystery of God’s love for us! Many of us had the grace to have tickets to be able to get into the sections of the parkway closest to the sanctuary. The ones that didn’t had the unexpected grace of encountering a priest who would give them a pass for their bus so that they would be able to drive directly into the parkway and be shuttled in!!! Our Lord was providing for us throughout the whole trip!!! Just before the mass, out Holy Father came around slowly to the crowds, kissing children, waving and blessing the everyone… What a powerful “seal” to our whole weekend, that we would be able to recieve our Lord and give him our lives, offering these past 3 days together with the Holy Father.

We would then return to the bus and drive through the night back to Cincinnati. On this trip back home, many of the young men would give witness to God’s work in their lives this weekend, of how our Lord gave them the grace to see Christ in the face of the poor! It was powerful to be with them in that bus, knowing that our Lord was touching their lives in this special way. It was the perfect end to the whole trip.