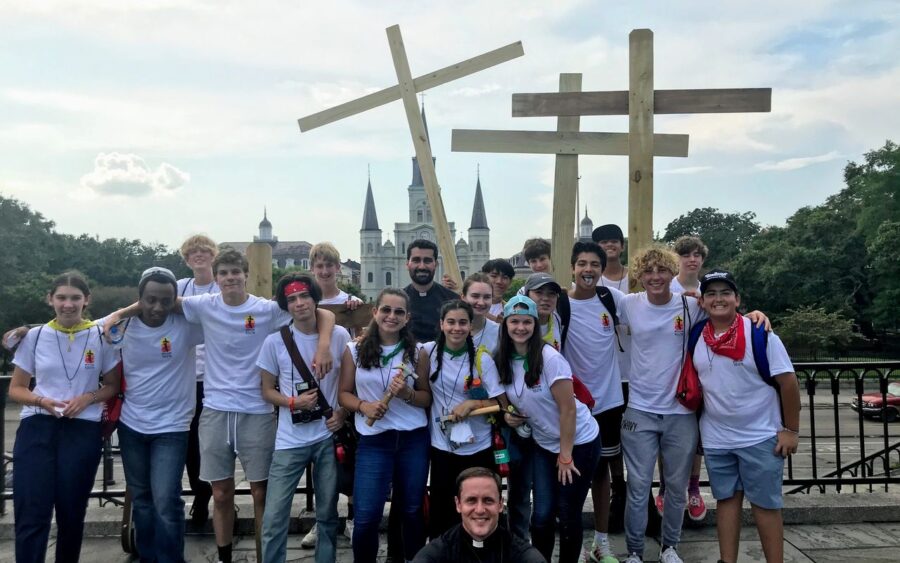 After 15 months of COVID, we were blessed this summer to have six different mission experiences, with over 100 participants. We had our first international missions: to Quintana Roo and to St. Croix, with over thirty young men. Nationally, we held four missions, serving in Philadelphia, Denver, Lake Charles, and New Orleans.

Each mission lasted about one week and young people from across the US participated. During that week, they formed a small Christian community, forming friendships through prayer, sacraments, fun, meals, and music. These summer missionaries braved some intense heat and other challenges to serve local communities. They brought Christian joy and courage everywhere they went: outside abortion facilities, serving the local parishes, knocking on doors, encountering the less fortunate on the streets, working on house and painting projects, and inviting people to join them in adoration. The missionaries ended their mission week tired and full of the deep peace that comes from spending a week serving God and others. Many missionaries shared that it was one of the happiest weeks they had experienced in a long time.

Manuella, a high school participant in the New Orleans mission, shared that she had a very moving experience during the “Operation Adoration” at the St. Louis Cathedral. Her team was in charge of handing out small lit candles to bring one before Jesus in the Blessed Sacrament as a sign of prayer, offering, and intercession. One older gentleman was the first one to come into the church and took the candle Manuella offered him. As she walked him toward the altar where the Blessed Sacrament was exposed, the man explained to her that he had misplaced his water bottle and had come to look for it. He placed his candle down and said a brief prayer. As she walked with him out of the Church, she gave him one of the water bottles the missionaries had on hand to give out and the man was so grateful. As the two hours passed, over 125 persons entered the cathedral to offer a candle and adore Our Lord for a few minutes. Several people stayed in prayer for the entire two-hour adoration time. During the adoration time, missionaries took turns leading songs and priests were available for confession. The missionaries as well as the staff at the cathedral were so impressed to see how easy and meaningful it was to invite people off the streets to come and pray.

We hope to make these summer missions a Mission Youth tradition!