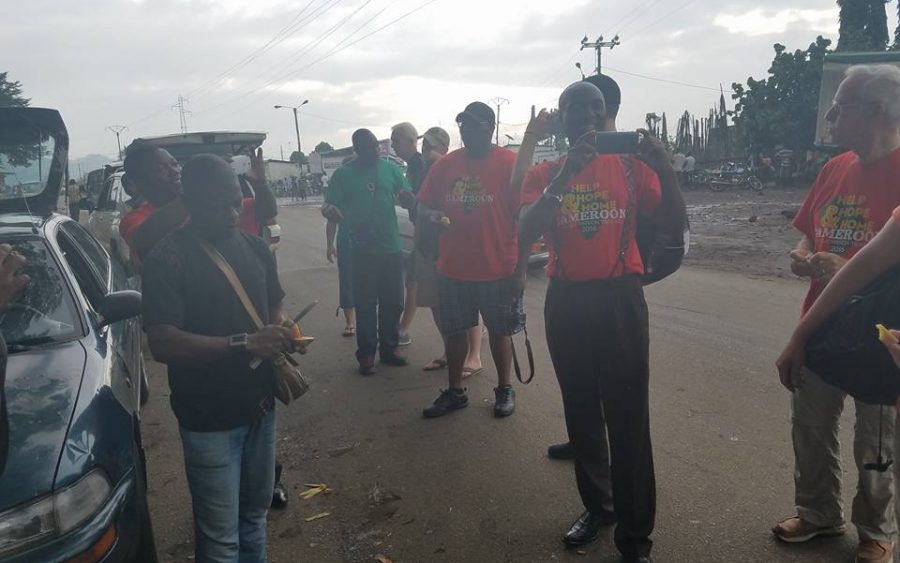 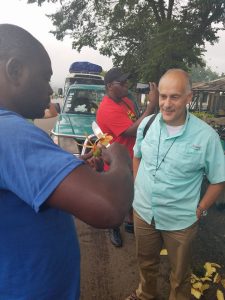 After 2 days of flying and a 13 hour bus trip, Alex Caraballo arrived yesterday in Nkar, Cameroon. How he ended up going to Africa is an even longer story.

It began over a year ago when a good friend of his partnered with Catholic World Mission in planning a big response to a big need in Nkar Cameroon. Mike Drapeau responded to an interior call to organize a mission (Read his story here: http://www.regnumchristi.org/en/help-hope-and-home/ ). He began the work of preparing the materials and missionaries. Why?  He said his inspiration for this mission “came from a smack on the head by the Holy Spirit.” Mike kept saying “maybe” each year when his Regnum Christi teammate asked him. “Will you come on an overseas mission with me?” But, as it turns out “maybe” always in the end meant “no”. So, one day after having just given his teammate his annual “maybe”, Mike heard the Holy Spirit say “since you can’t commit to going on a mission, I want you to organize one”. And that whisper from the Holy Spirit has since become the roar of this “Help Hope and Home” mission to Nkar, Cameroon. The mission is focusing on building a new school, completing and outpatient clinic, and a rugby field.

A few months ago, Mike’s plans to go to Cameroon changed when he was diagnosed with cancer and realized he would be in treatment at the time of the mission. The news was hard for Alex and the other members of Mike’s Regnum Christi team to hear, but they were determined to accompany and support Mike and his family in his treatment and healing. Alex wrote about the impact of the news on the men, and how they learned to surrender control to God and pray for their friend here: http://live.regnumchristi.org/2016/04/when-its-out-of-your-control/ .

God had more in mind. Alex shares his experience here:

As I sit here thinking through the events that have transpired over the last couple of weeks it amazes me how God works.

In a previous blog, I talked about a friend who has cancer and how we as men united in prayer for him and his family. As we continue in this journey, I remember my friend talking about his mission trip that he has been planning now for over two years to Cameroon.  He was talking to some of the other men about what happens if he has stage 3 cancer and his thought was that he would have to cancel the mission trip. 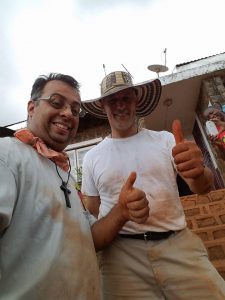 Alex and Fr Juan after Day 1 of work in Nkar

I have been setting up missions for over the last 6 years so I recognize that setting these up in another country is difficult and something that would be awful to cancel.

I was myself working on a family mission trip to Mexico for June and was almost at a point where we had everything put together. It took a couple of weeks, I had everything in place. I had families interested and the location selected and we were set. The dates were nailed down for June but I was having trouble finding a priest to go with me on this mission. In some cases they said yes and for various reasons they had to back out and it was becoming difficult to get someone. I ran into one of the families and they told me that three of the four families who were going had to back out of the trip. I was disappointed but understood and told myself, well maybe this was the reason I could not get a priest because God had other plans, and boy did he have other plans.

While in adoration I was praying for my friend and his family and something about the conversation he had with one of our mutual friends tugged at me. I was thinking what a huge burden this must be on him to have to figure out what he should do here with the mission knowing he is going to start Chemo. How difficult this would be for his family to allow him to go and worry about him being ok. Then something told me to remove his burden and go on his behalf. My next thought was around what my wife would think, would she even be ok with me going? An inspiration came over me to send him a text from adoration to tell him not to worry, I will go on his behalf. I prayed that God help me to ensure it is his decision and not mine. I had not even consulted my wife, which I try to do in these big decisions. I simply prayed, “God I trust you will guide me through this process and combine my struggles to get to this mission and offer them for my friend and the personal fight he was about to enter.”

I finally told my wife and explained what happened and told her this mission needs to be completed. She looked surprised but understood that when I think something is a calling from God, I need to act on it. She asked questions about the trip and I told her I did not know anything but that I scheduled lunch to discuss the details.

Soon after, I remember being at one of my kid’s soccer games and a friend asking me how long the trip would be? When is it? How much does it cost? Are you ready? My answer seemed so dumb… “I don’t know anything yet but I have a meeting scheduled next week to discuss the details.” I thought they must think I am crazy, and to some extent I wondered the same thing but I knew it was something I was called to do.

So the day came, the day I would find out everything that needs to be done. My first question was, when is this trip? He told me June 12-24, I told him that I had just cancelled my mission trip which was scheduled June 12-17 and we both thought this is God’s work because it would not have worked out unless my trip was cancelled. I had my validation, God was in control and I was a passenger on this journey. So as Mike proceeded to tell me the details of the trip, I got excited and was calm. I told him for the first time in doing a mission I was at peace and had no real concerns.

God wants this mission trip to happen and I don’t know the final outcome as it is in his hands. So far I have learned that even when we have great obstacles placed in front of us, asking for help and being at peace with the circumstances can help you achieve the goals and bring more people together.

My friend has some amazing goals for this community and I want God to use me as his instrument to make some of that happen. In my journey, I hope to blog about the experiences that God has in front of me and hope you will follow me on this.