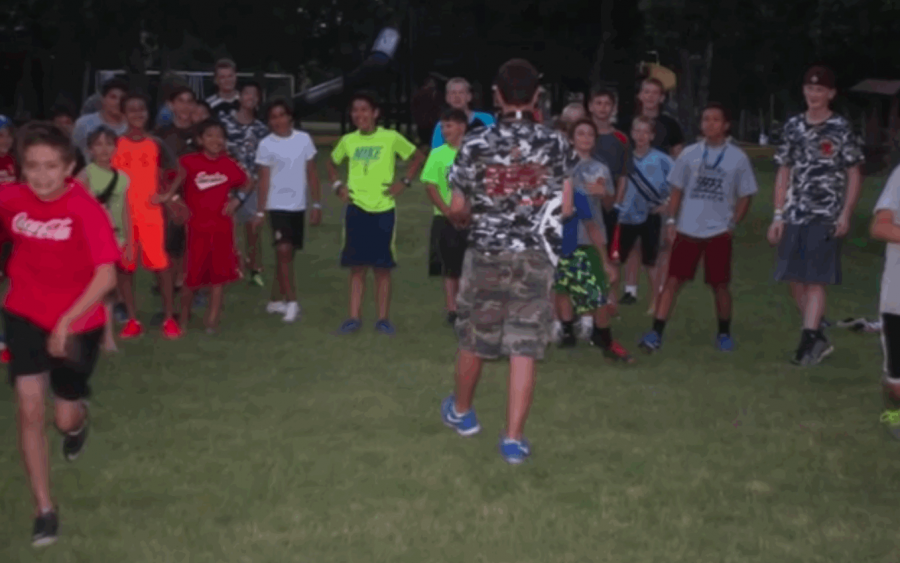 Just south of Dallas, DFW Conquest had its summer camp at the campsite, Camp El Har “Hill of God”.  Fr Michael Picard and Br. Joaquin Sainz directed the camp with 10 High Schooler counselors along with Conner Montang who had just finished 2 years of Regnum Christi Mission Corps.  This is the first year back for this camp to take place and had about 30 boys 10-15 years old.  The Theme was the “Band of Brothers” focusing on developing leadership and teamwork amongst the campers.  Each camper had to earn their dog tag through acts of virtue or leadership skills, each team decided as a team when a teammate had earned his tags.  There was a great mystique amongst each of the teams.  One of the greatest builders of the team spirit was on Tuesday when the teams spent 2-3 hours building a boat out of cardboard.  They had to use this boat they built to get their team from one side of the pool to the other.  Two of the four boats got the whole team across without sinking.  There was some open mic time at the end of the camp and almost all the boys came up to give their favorite parts of the camp; ranging from the food to the Eucharistic hour.  Many enjoyed the paintball, building of the boats, spiritual direction, their team, night games, or talks.  There was a lot of enjoyment and all look forward to next year. 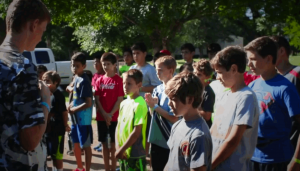 Being a band of brothers theme each day began with a wake up run around the campsite before morning meditation and Mass.  In the mornings were various team building activities and virtue talks given by the High School Counselors.  Then in the afternoons each day the boys had 4 choices of fun activities (paintball, horseback riding, archery, putt putt, nuke’s, soccer) before swim.  Around dinnertime each day there was a more spiritual activity rather it be stump priest, Faith Jeopardy, or a spiritual talk.  The night games were unique this year with each day built upon the last.  The first night of camp they discovered through an interactive game that the Nazis where getting close to cracking a code and their mission was to get if first.  Each night they received more clues through various fun activities: boarder wars, night watch, and the final day, night laser tag against the Nazi counselors who stole the clues they had recovered the previous day to crack the code.  This part went off very well and the decoded message they discovered was about how our life is a journey and we must live it to the fullest and never give up living our faith out in virtue.  As well all points earned went towards the team being able to purchase mission centers, missionaries, and crusaders to evangelize the world; similar to risk.  By the end of the camp each of the teams, which were divided up in two age groups, came together in real brotherhood and was sent forth as a band of Apostles.  At the closing Mass, all the participants made the Pledge of Friendship with Christ – to strive to be a better friend of Jesus after leaving the camp using the tools of ECYD.