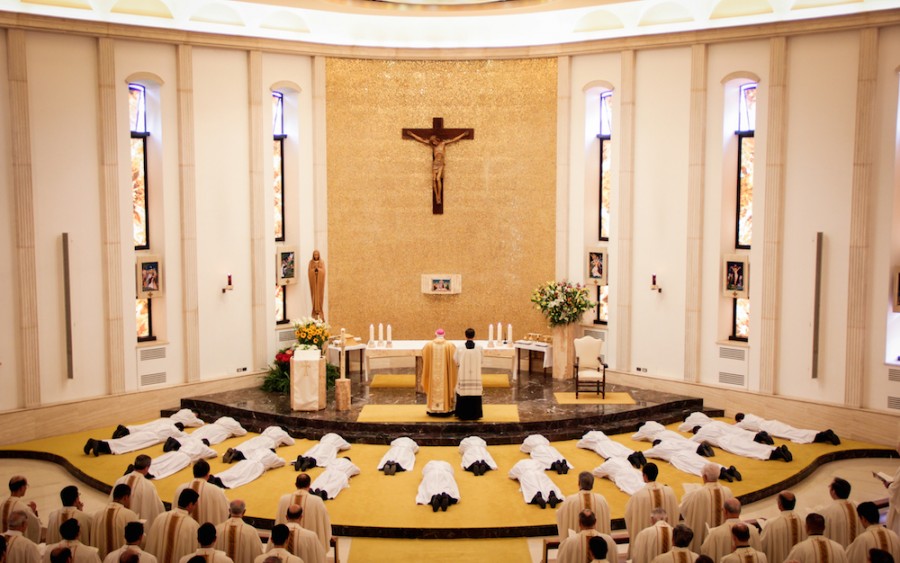 Roma. 2 de mayo de 2015. Bishop Brian Farrell, LC, Secretary of the Pontifical Council for the Promotion of Christian Unity, ordained 20 Legionaries of Christ deacons in the chapel of the Legion of Christ’s Center of Higher Studies in Rome.  Fr. Eduardo Robles Gil, LC, the Legion’s General Director, and some 150 other priests, both religious and diocesan, both religious and diocesan, concelebrated.

The 20 new deacons come from Canada (1), India (1), Germany (2), Colombia (5), Mexico (5), Brazil (4), Italy (2).  Most of them will leave Rome to begin pastoral ministry at the end of the semester, though a few will stay in Rome to begin post-graduate studies.  In the next few weeks Legionaries will also be ordained deacons in Mexico, Poland France, Spain and Brazil.  They will all be ordained priests in Rome on December 12 in the context of the 75th Anniversary of the foundation of the Legion of Christ and the Year of Mercy announced by Pope Francis.

During the homily Bishop Farrell reflected upon how in the early Church the deacons were a response to a very concrete problem: how to make God’s merciful love present within the Christian community.

He invited the new deacons to renew their gift of self to the Lord and to trust in the action of the Holy Spirit.  “I am the titular bishop of Abitinae, a Christian community that flourished in North Africa until it was destroyed during persecution by the Roman empire.  There were four deacons […] who were arrested for meeting on Sunday and taken to Carthage.  When they were offered their freedom [if they were to cease to meet on Sunday], they responded: ‘Without Sunday, we cannot live.’  That is to say, without the Eucharist, we cannot live.” He added: “The decision to receive Holy Orders entails re-enforcing all the decisions you have made up until now.  It entails giving yourself totally to Christ, whatever the consequences may be.”

“On behalf of the new deacons and the whole Church I would like to thank the families of these young men.  The family plays an important part in the life of every priest.  Without their support during the long years of formation, it would not be possible to follow Christ’s call,” said Fr. Benjamin Clariond, spokesman of the congregation in Rome.

Besides the Legionaries who live in Rome, some of the deacon’s families and friends joined them for the celebration.  Large groups from several parishes where the new deacons had exercised ministry while they were in formation were present to show their support.  As well, the consecrated women and the consecrated lay men of Regnum Christi living in Rome were also present.

Deacon Daniel Egervari (Germany), said: “A thought of Pope Francis touched me: ‘When he calls us, God says: “You are important for me!  I love you!  I’m counting on you!” Jesus is saying this to each of us.  This is where our joy comes from.  It’s the joy of the moment Jesus looked at me.  This awareness is the secret of our joy.’  I’ve had this thought present in these days.”

Deacon William Baez (Colombia) said: “During these months, I’ve been reflecting that to be a good Christian and a good priest, I have to be a true friend of the Holy Spirit.” Deacon Baez also said: “I have been upheld by the prayers of many people who have prayed to God for me.”

The average age of the deacons is 32 years old.

The names of the new deacons