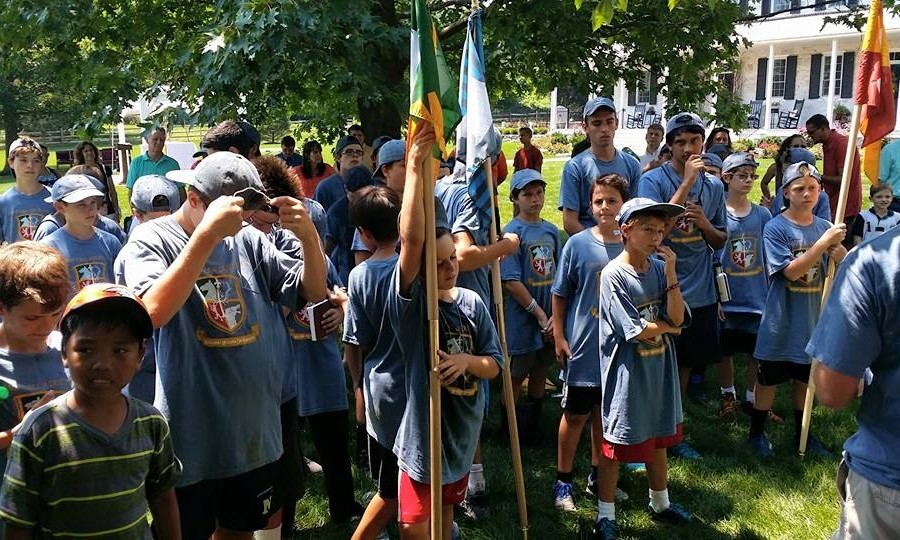 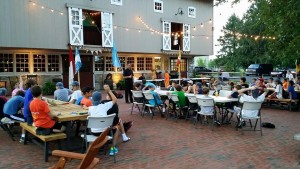 The 4th annual Conquest National Camp was held in Mount Joy, PA July 11-19th, 2015.  Fifty-three boys ages 10-14 engaged in the Building Modern Day Knights Academy including 8 high school officers along with 9 adult staff and 3 priests. Fr. Justin Kielhorn, LC, the camp Chaplain, helped kick off the camp with Mass on the first evening.  The young knight students were evaluated immediately following Mass for tryouts for their acceptance into specific medieval houses (teams). The four houses are Lykon, Gringolet, Arcas and BanStag.  A special choosing ceremonial procession complete with house flags ended around a campfire where the formal ceremony took place.  Boys were “called” to their respective houses, and introduced to their house officers.  From this point on, they built their mystique within each house, each having its own lair (dorm) as well as being issued their official guide-on flag that would never leave their grasp the entire camp (even amongst the fiercest of battles).

The camp was focused on building spirit within the houses, teamwork, leadership, and collaboration to win in the daily knight competitions.  Each morning would begin with optional adoration, which many boys took advantage of, then a 15minute morning meditation focused on a Gospel passage and tying into the theme of authentic manhood and knighthood. 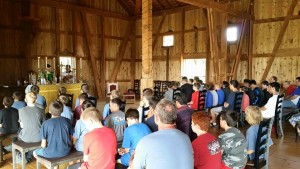 Daily activities included talks on their call and duty as knights of the Kingdom, team gospel reflections, team rosaries, swimming in the pool, sliding down the 100 foot slip-and-slide, late afternoon adoration, and Mass before dinner each evening.  They were treated to campfires at the end of each day, with Fr. Justin leading the boys and officers in a review of the day where the boys shared their high’s and low’s and what they learned.  Every activity was focused on the theme of knighthood in medieval times such as medieval ball, water balloon battles, and other fun knight themed physical games. Each house was issued their armory (weapons boxes), where they made and decorated their own individual battle shields, battle barriers and battle swords.  Each house was also issued laser-tag gear, which they would be responsible for the entire camp.  They could upgrade their guns by purchasing additional weapon options with points earned from their team. The first few days they were introduced to the weapons and practiced swords play, javelin throwing, pugile stick fighting and boulder tossing for the Ultimate Knights Tournament.  They also prepared and built their own house forts in the woods, with each house spanning over a distance of several acres from other houses.  This is where their base was for the laser tag / modern day knight battles that ensued daily, complete with swordsmen and soldiers within each house – 4 way brutal battles.

There was a special fatherhood weekend 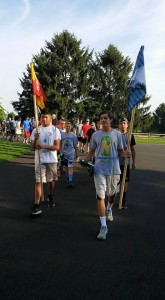 track that began on Friday the 17th with 22 dads joining the camp and activities.  The day began with Bill Hicks and Brett Thomas leading a special activity of making ceramic crosses in a Raku fire kiln process complete with unique special glazing.  The afternoon and evening included special talks on fatherhood just for dads by Fr. John Ezratty from the Miles Christi order in Michigan. Fr. Edward Connolly and Fr. Louis Rodriguez (local diocese) also joined the camp helping with the daily meditations and talks for the boys (and dads). Back in medieval times, only knights had the honor and privilege of serving the Mass.  St. Michaels Guard was present each evening during the entire duration of the camp and led by the founder Courtney Abel. The men were great role models in their full habit serving daily with Mass, adoration and the formal knight ceremonies.

The last night of the camp was very special.  It included a special Eucharistic procession through the woods by torch lights, complete with flags, ending on a hillside for the very special knighting ceremony.  After a short period of adoration around the campfire, each boy kneeled down as Fr. Justin held the monstrance and brought them face to face with Christ, then Fr. Rodriguez formally knighted them with the camp sword “Legend”. It was a profound experience for all of the boys and dads that were present. 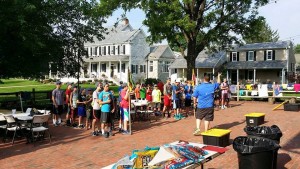 The camp concluded on a high note on Sunday July 19th with all the boys families present for Mass celebrated by the Bishop of Harrisburg, the most Reverend Ronald W. Gainer, D.D., J.C.L  His homily congratulated the boys on learning to be modern day knights in todayss world that desperately needs apostles on fire for Christ. The camp awards ceremony immediately followed, with the house Gringolet coming in first place – claiming rights to the “Legend” sword for their house for next years camp. Lunch was served for all including special home-made ice cream from an old steam engine complete with all the fixings.  The national camp included Conquest boys from many states such as FL, GA, VA, DC, NC, CT, NY, WI, IN, WA and PA.

The 2016 camp will be held July 10-17th in Mount Joy, PA.  Registrations will open in late September – register early to ensure a spot!

Read the article covering the camp in the newspaper of the Diocese of Harrisburg here (page 16).