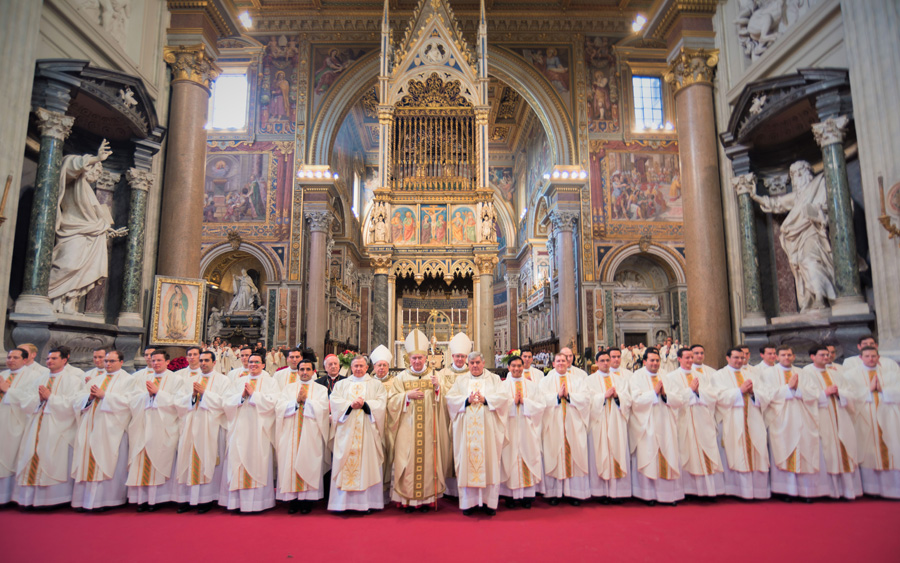 Rome, December 10th 2016.– Cardinal Pietro Parolin, Secretary of State of His Holiness, ordained 36 legionaries of Christ to the priesthood in the Basilica of St. John Lateran. More than 3,000 people including family members, friends, fellow seminarians and superiors attended. Fr Eduardo Robles-Gil LC, General Director of the Legionaries of Christ and the Regnum Christi Movement, presented the candidates for priestly ordination.

In his homily Cardinal Parolin said that the vocation of these new priests “has but one source: the reality of being seekers of God, who have allowed themselves to be conquered by him …” He reminded them as well that “It is the Holy Spirit that, through the imposition of the hands and the anointing, makes you capable to serve as ministers of the Lord amongst the people of God.”

Cardinal Parolin also said to the new priests: “Dear friends, yours will not be a life of rejection or evasion from the world, but rather a serene incarnation in history, so that all who cross your path may live the religious dimension, that is, their relationship with God, to the full. This relationship with the Lord can never be taken out of human existence”. He also warned them against the danger of spiritual worldliness which Pope Francis has so often mentioned. He invited them: “show in your lives that humility and simplicity which Christ lived and through which he strived to win our trust and save us”.

He concluded saying: “I pray that your Congregation may continue to walk down the pathway of renewal and evangelical authenticity, with courage and generosity, following the directives laid out for you through the accompaniment carried out by the Holy See, all this, for the greater glory of God, the service of the Church and the salvation of the world. Amen.”

Fr Eduardo Robles-Gil LC said, “The Legion of Christ and the whole Regnum Christi family is celebrating today, thanking God for the gift of the 36 new priests ordained and put at the service of the Church. We are full of gratitude to the families who with their prayers, presence and support have been so important during the journey of these young men so that they might arrive to the altar.”

During the priestly ordination about 150 priests concelebrated. Msgr. Matthias König, auxiliary bishop of Paderborn, Germany and Msgr. François Bacqué, apostolic nuncio emeritus to the Netherlands assisted during the rite of the anointing of hands and the offering of the chalice and paten. Deacon David Parker Sr., a permanent deacon from the United States, father of Fr David Parker Jr. who was being ordained, assisted the Cardinal in mass. Father and son were ordained deacons during the same ceremony a few months ago in Pulaski, Wisconsin.

Who are the new priests?

The 36 priests come from 11 countries: United States (8) Italy (2), Germany (2), Mexico (13), Brasil (3), France (1), United Kingdom (1), Venezuela (1), Argentina (2), Poland (1), and Chile (2). They all have degrees both in Philosophy and Theology from the Pontifical Athenaeum Regina Apostolorum. Their study period and preparation included an internship phase working with families, youth groups, schools, missions, and minor seminarians.

One of the newly ordained was Ryan Richardson, from New Orleans, who is currently serving in youth ministries in Dallas. His participation in a Regnum Christi volunteer program helped him give a deeper meaning to his life and eventually pursue a vocation to the priesthood. Fr Brett Taira from Santa Barbara, California, was raised Buddhist and became Catholic during his youth. Some time after encountering Christ, he entered the Legion’s novitiate. Fr. Benjamin Errington, from the UK, is an accomplished violinist and pursuing a degree in philosophy in Trinity College, in Ireland.

Juan Andres Lander, from Venezuela, studied computer engineering. He worked in a company in England designing software and after a period of volunteer work with Regnum Christi discovered his call to the priesthood in the Legion. Fr. Pablo Solis, from Mexico, finished his industrial engineering studies at the Iberoamericana University in Mexico, and worked for Procter and Gamble as well as Kraft Foods before entering the novitiate.

Fr Nikolaus Klemeyer from Germany was Lutheran, and became Catholic before entering the Legion. During his time in the seminary his family also entered the Catholic Church.

Fr. Gaston Vicuña from Chile was a consecrated lay man in the Regnum Christi Movement for 8 years. After a period of discernment, he decided to begin his pathway toward the priesthood in the Legion.

Some of the new priests said that their volunteer experience as Mission Corps helped them to discover the meaning of their life through serving others, among whom are Daniel Rolczynski, Michael O’Connor, Eduardo Favila, Ryan Richardson, Esteban Castellanos, Juan Pablo Najera, Leonhard Maier, Cesar Hernandez and Francisco Iñarritu.

The stories of the new priests can be read on the ordination web site.

The Legionaries of Christ

The Legion of Christ is a religious congregation in the Catholic Church which has priests and seminarians. Founded in 1941, it is part of the Regnum Christi Movement. It is present in 21 countries. Among its members are 4 bishops, 959 priests and 687 religious in formation as well as novices (according to the statistics from December 31st 2015). Its spirit is Christ centered, contemplative and evangelizing. The Legion strives to creatively bring the gospel message to the world working together with lay members of the Church. It professes a deep love for the Holy Father, Vicar of Christ and the bishops with whom they collaborate in the pastoral action of the local Church. Its theme “Thy Kingdom Come” expresses the desire that Christ reign in the hearts of all men, families and society. For this reason, we work with other members of the Church and with people of good will so Christ’s Kingdom may become a reality striving to do all for the Glory of God.