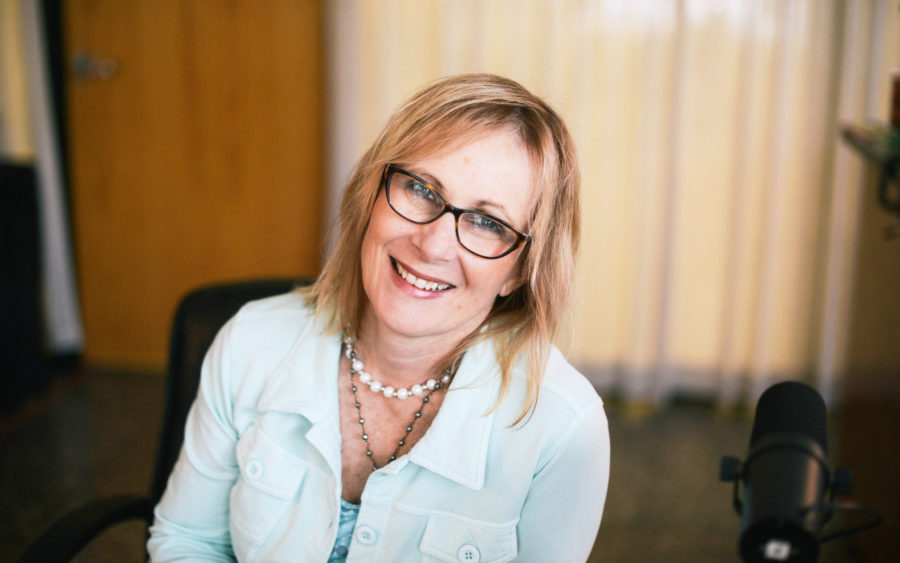 Catholic Women Now: A Dream Written in the Margins Comes to Life

Julie Nelson is the co-host of Catholic Women Now, a popular Iowa radio show for women, but if she had let failure stop her from pursuing God’s plan for her life, she probably wouldn’t be on the air today.

Julie’s first foray into radio was not a shining portent of the show’s current success. When she was working as the Adult Faith Formation director at her parish in Des Moines, Iowa, the local Catholic radio station invited her on air for a half-hour interview spotlighting her ministry. In Julie’s words, she “completely bombed” the interview, and didn’t even tell anyone that she had been on the air. “Who would want to listen to that drivel?” she thought, walking away from the interview. But the seed of her future calling as a radio personality had been planted.

Her second chance at radio was a turning point in Julie’s life. When she had the opportunity to interview a fellow staff member on air, not only did she discover that she could do it with humor and ease, but she found something else too: a real – and unexpected – passion for radio. Soon after, while Julie was attending a silent retreat, she was prompted by the retreat leader, Father James, to write down the dream that God might be placing on her heart. In tiny letters, in the margin of her journal, Julie timidly wrote: “Lord, I want to be on the radio.” God, with Julie’s passionate participation, took it from there.

Noticing that there was no local programming specifically for Catholic women, Julie approached the station manager at Iowa Catholic Radio with an idea that would become, in 2013, Catholic Women Now, a half-hour show exploring a wide variety of topics relevant to Catholic women today. On their weekly show, Julie and her co-host, Chris Magruder, explore the broad, and sometimes weighty, themes of faith, family, and friendships in an intimate, compassionate, and conversational way.

This conversational quality is what makes Catholic Women Now such a warm-hearted and relatable show. When Julie and Chris began broadcasting their show, their principal goal was to meet the spiritual needs of the Catholic women who would be listening, in a comfortable and relaxed way. Julie wants women, when they’re listening to the show, to feel as though they’re at a coffee shop, chatting with friends. “We’re not interviewers, but conversationalists,” explains Julie, “It is important that the women listening feel part of the conversation. The show is theirs. Everyone listening is a friend.”

And it’s clear that this conversational approach is working – more and more women all over Iowa are tuning in. Julie attributes the success of the radio show to its being local and community-based. “[The show] has helped women to be more connected with each other among the Catholic community and parishes,” says Julie, and this sense of belonging is an important part of the Catholic Women Now ministry. Four times a year, the radio station hosts a free, in-person luncheon, emceed by Julie and Chris. Here, they get to personally meet their listeners and develop an even deeper relationship of community and accompaniment that is so important to the show.

Appealing to women of all interests and life stages, Catholic Women Now covers a vast array of topics, from family life to friendship, all centered around living the Catholic faith. “The show is the what, why, and how to live this in our lives,” says Julie. Women can tune in to hear how to live their faith in an authentic way, and find heart-felt and practical advice on real-life issues, like letting go of insecurities, growing in the spiritual life, strengthening their marriages and relationships with their children, and becoming the women God has called them to be.

Meeting people and hearing their stories is Julie’s favourite part of the job. Interviewing, to Julie, is a form of accompaniment; asking questions and listening to her guests’ life experiences is an act of empathy in itself. “I have always enjoyed meeting people and understanding what has shaped their journey, and what lessons they learned along the way.”

Along with tackling the often-serious subjects of religion, relationships, and the feminine genius, Julie and Chris have a lot of fun too. One of their most popular shows featured an interview with Brother Andrew Corriente, recent winner of The Great American Bake-Off: Holiday Edition. This balance of fun topics and faith formation contributes to the overall tone of Catholic Women Now – one of joy, hope, and above all, authenticity.

And it’s this authenticity, now more than ever, that women are seeking. “The world is broadcasting a message of false empowerment,” says Julie, explaining that the media message that women commonly receive today is that “joy, success, and conquering of self is up to each of us.” But what happens when women find that they can’t achieve all these things on their own, that they can’t do it all? “We wonder what is wrong with us,” Julie says. Women today, in reaction to these false messages, are experiencing a sense of failure, feelings of inadequacy, and sheer loneliness in their struggles as they compare themselves to others. Catholic Women Now responds to these experiences by encouraging women to find their true identity not in the world, but in God. “I think the show is meeting a need of supporting women in their dignity as a daughter of God,” says Julie. “Our show brings to women that the answer is faith and trust in God, who alone suffices.”

For Julie, this means being vulnerable with her listeners. “As a speaker, I have to be open about my own struggles,” she says. Over the seven years that Catholic Women Now has been on the air, Julie has learned to overcome her fear of being misunderstood or making mistakes. “Over time, God has shown me that it is not about me.” Before every show, she prays to be God’s vessel, and that Christ will use her to reach the hearts of her listeners. She also prays that she will not take herself too seriously. “I make mistakes and will make more mistakes,” she says, explaining that the unforgiving nature of live radio has helped her to be more genuine with her listeners, and more attentive to her guests. Since there’s no way to edit, and no time to worry about minor mistakes in delivery, Julie has learned to be fully present to the person she’s speaking to, not only during an interview on the air, but also in person. “It has humbled me,” she says. Every show is closed with a spontaneous, intercessory prayer for women.

It’s clear that the humble, prayerful, and authentic approach of Catholic Women Now is having a real impact on its listeners. Julie frequently hears from listeners not only that they have been touched by something they’ve heard, but also, through the radio show, that they themselves feel heard. “Women want to have a place to feel accepted and acknowledged especially in the daily chores and duties of life,” says Julie.

For one such listener, the radio show had a profound influence on her life: she decided to convert to the Catholic faith! “We recently had a guest on the show whose conversion from Protestant to Catholic was influenced by listening to Iowa Catholic Radio. Catholic Women Now was one show that impacted her journey,” says Julie. “I think hearing the faith from woman made her at ease.”

What new plans does God have in store for Catholic Radio Now, and Julie herself? In the midst of the current COVID-19 pandemic, more and more people are searching for and tuning in to online content. The radio show will be looking to offer more online discussions and live-streaming events, but most importantly, Julie and Chris will be focusing on providing programming that brings much-needed hope to their listeners.

As well, in response to yet another aspiration God has placed on her heart, Julie is pursuing a ministry as a Catholic speaker. “God had a plan,” Julie says, of her dream, inscribed in her journal so many years ago, to become a radio personality. Julie faithfully and passionately continues to follow God’s plan for her life.