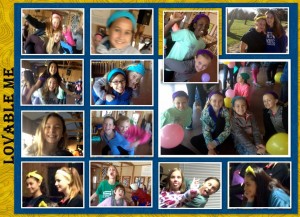 Challenge girls from the Midwest just got together from November 20th – 22nd, 2015 to spend the weekend together on the “Lovable Me” retreat in Williamsburg, KS at the Prairie Star Ranch.  The Young Women’s Regnum Christi team from Benedictine College planned the beautiful weekend for the girls and served as the 12 team leaders during the weekend. Over 60 girls attended the retreat, where the goal was to give the girls an experience of Christ, true friendship. There were 8 volunteers and 2 consecrated women (Katelyn Moroney and Melanie Pilon) who helped worked to help each and every girl  to recognize themselves as loveable in the eyes of God, others and themselves.

The campaign showed the girls that they can make a difference in the world by simply loving others, doing good deeds and praying for others. Through icebreakers, crafts and dance parties the girls were able to connect and have fun with peers their age and older girls as well. This gave the younger girls opportunity to create bonds with the older girls have good role models. Through Gospel Reflection, talks and guided morning and night prayers the girls were able to realize that they are loveable because they are created by God and that they are called to follow Christ and be a leader by example, to the world. As well personal moments of prayer in Mass, the Marian Procession and all night adoration gave time to personally connect with God and feel loved. 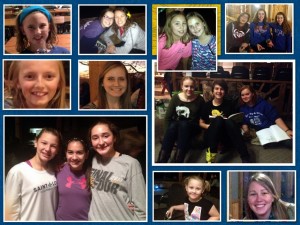 Friday evening the girls arrived. They played fun games to meet new people and got excited about the retreat. During the intro talk they took a moment to write on wooden crosses why they are loveable. The night activity was an interactive game-board. The girls had fun while learning how to work effectively in a team and bonding with others. Saturday was a jam-packed day. In the morning, the tracks split up and had the first session: Loveable Me. The goal of this session was to have the girls realize that they are loveable because they are created by God. After Mass there were more games and crafts, and later sports and then Gospel Reflection. All moments for the girls to bond and create positive relationships centered in Christ. In session two, they defined leadership and how to lead by example. Then Fr. Joshua West talked to the girls about confession. After the girls prepared their Marian altars, we had a Marian procession with songs.

That night there was Exposition and the girls began all night Adoration.  It’s always their favorite memory from the retreat! Early on Sunday morning there was Benediction. Then the girls cleaned up and had their final session on being a modern day missionary. The goal of this session was for the girls to make a decision to bring the love of Christ to others thus bringing Christ’s Kingdom to Earth. The retreat was concluded by a final experience of love through Mass.

Congratulations to the team of volunteers and leaders who put together this retreat and touched the lives of the girls.