The crowds asked John the Baptist, “What then should we do?” He said to them in reply, “Whoever has two cloaks should share with the person who has none. And whoever has food should do likewise.” Even tax collectors came to be baptized and they said to him, “Teacher, what should we do?” He answered them, “Stop collecting more than what is prescribed.” Soldiers also asked him, “And what is it that we should do?” He told them, “Do not practice extortion, do not falsely accuse anyone, and be satisfied with your wages.” Now the people were filled with expectation, and all were asking in their hearts whether John might be the Messiah. John answered them all, saying, “I am baptizing you with water, but one mightier than I is coming. I am not worthy to loosen the thongs of his sandals. He will baptize you with the holy Spirit and fire. His winnowing fan is in his hand to clear his threshing floor and to gather the wheat into his barn, but the chaff he will burn with unquenchable fire.” Exhorting them in many other ways, he preached good news to the people.

Introductory Prayer: As Christmas draws near, I desire to learn more deeply your example of humility by coming among us as an infant. I pray that this season rekindles my sense of hope in your providence.

Petition: Jesus, grant me the grace to grow in the virtue I need to cultivate most.

Conversation with Christ: Lord, for you, charity is the highest value. You even spoke about it the night before your death. “I give you a new commandment: Love one another as I have loved you, so you also should love one another” (John 13:34). Christmas should enkindle charity in my heart. Let me see you in every person I meet today.

Resolution: I will perform a special act of charity today for someone at home, work or school. 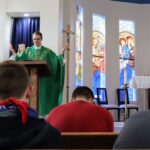