Some Sadducees, who say there is no resurrection, came to Jesus and put this question to him, saying, “Teacher, Moses wrote for us, If someone’s brother dies, leaving a wife but no child, his brother must take the wife and raise up descendants for his brother. Now there were seven brothers. The first married a woman and died, leaving no descendants. So the second married her and died, leaving no descendants, and the third likewise. And the seven left no descendants. Last of all the woman also died. At the resurrection when they arise whose wife will she be? For all seven had been married to her.” Jesus said to them, “Are you not misled because you do not know the scriptures or the power of God? When they rise from the dead, they neither marry nor are given in marriage, but they are like the angels in heaven. As for the dead being raised, have you not read in the Book of Moses, in the passage about the bush, how God told him, I am the God of Abraham, the God of Isaac, and the God of Jacob? He is not God of the dead but of the living. You are greatly misled.”

Introductory Prayer: Lord, I come before you humbly. As one who has frequently fallen into sin, I am aware of my weakness. Your great love, though, assures me that your grace can keep me on the path to holiness.

Petition: Lord, let me imitate you better in my dealings with my loved ones.

Conversation with Christ: Lord, help me see the greatness in people, their good qualities and their potential to be apostles. Let me see, too, how I can help them along the path to holiness.

Resolution: Today I will compliment someone on a genuine virtue they possess. 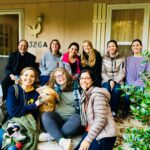