They have spread out across the far reaches of the country and even around the world, but for ten classes of graduates, the quiet green campus and brown brick buildings of Pinecrest Academy tucked away in Cumming Georgia are home. The private Catholic prek-12 school run by the Legionaries of Christ has been in existence for 24 years, but this May marks a decade since their first senior class graduated. With a mission statement that declares “We prepare our students to become committed Christian leaders, eager to transform a global society,” it’s worth taking a look at what some of those alumni are doing now.

The Pinecrest Academy Alumni Facebook page, called “Always a Paladin” gives snapshots of lives formed at home and in the classroom, that are bearing fruit in diverse ways after graduation. Here are just a few of their remarkable lives and achievements. 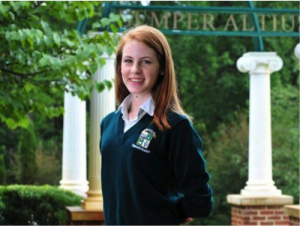 Danielle Madda, the Salutatorian of the 2017 class and one of the newest alumni of the school, will be one of over 30 Pinecrest graduates to participate in the RC Mission Corps program over the last 10 years.   Danielle credits her school with having “taught me how to love and [it] has inspired me to serve others, beyond the classroom, in the way Christ taught us, with a joyful and willing heart.” After her Mission Corps year, Danielle will embark on another adventure. She was not only was accepted to the Georgia Institute of Technology, an accomplishment in itself, but she has also been awarded the university’s Stamps President’s Scholarship. According to Georgia Tech’s website, less than 1% of their admitted students receive this prestigious award, which includes a four-year, full scholarship covering tuition, mandatory fees, housing, meal plan, books and academic supplies, personal expenses, and a stipend during freshman year for a laptop. 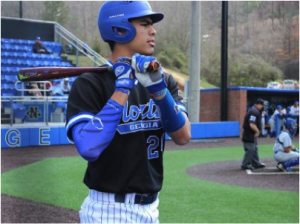 Andres Perez (’16) is the son of Eddie Perez, a former MLB player, current first base coach of the Atlanta Braves and hitting coach of Venezuela’s World Baseball Classic team. Andres was drafted by the very team he has grown up watching, the Braves, in the 36th round of the 2016 MLB Draft. While honored by being a draft pick, Andres decided to sign with the University of North Georgia instead, pursuing his education and continuing to play baseball for the Nighthawks. 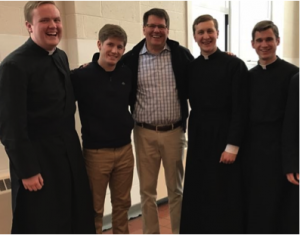 Brother Brian Flanigan (’16), Brother Gregory Metz (’15) and Brother John Frain (’15) joined the novitiate of the Legionaries of Christ after graduation and are currently finishing their first and second year as novices. All three of them (pictured here with friend Cole Doxtader (’13) and Cole’s dad Mark, who currently serves as Chairman of the Board of Pinecrest Academy) grew up in the Regnum Christi Movement and went to Pinecrest Academy since their early years. They join several other Pinecrest alumni who have become Legionaries of Christ including Br. Christopher Daniels (’08) and Br. Diego Flores (’10). 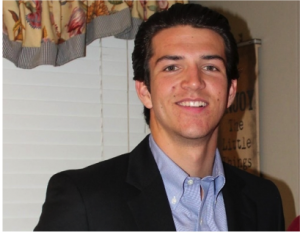 Christopher Birozes (’14) returned to Wingate University this fall, after an almost year-long break due to a rare liver disease that required an organ transplant. Now that he’s back at Wingate, Chris has added the pre-med tract – abdominal organ transplant – to his pursuit of a finance degree, due to his new interest in medicine, based on his personal journey. “The transplant is the reason I am able to wake up healthy today and every day, and to give someone else that opportunity is what I want to dedicate my life to. God’s plans may change, but I am willing to accept and take advantage of whatever doors God opens and closes for me.” Chris is still on Wingate’s football team, though redshirted due to doctor’s orders. He has been punting and working out with the team, with plans to return to the football field in the spring and play during the 2017 season. 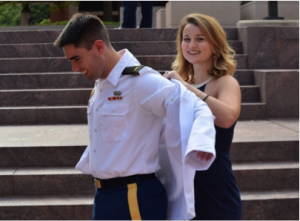 Second Lieutenant Erik Hegeman (’12) graduated from The United States Military Academy-West Point in 2016 and has completed his first year of Medical School at the Uniformed Services University of Health Sciences in Bethesda, Maryland. He is pictured here receiving his white coat on the day he recited the Hippocratic Oath, with his wife Kaitlyn (Mathis) Hegeman (’12) 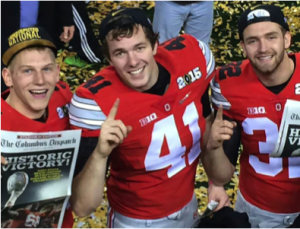 Brice Haynes (’11) signed with the Ohio State Buckeyes after graduating from Pinecrest.   Haynes is a three-time academic All-Big Ten honoree and a four-time Ohio State University Scholar-Athlete who graduated with his degree in biology. Bryce was named a Big Ten Conference Distinguished Scholar for the 2012-13 academic year for maintaining a grade point average above 3.70 for the year. In 2014 Bryce was long snapper for the 2014 College Football Playoff national champion Buckeyes. He just finished his first year of medical school at Emory University. 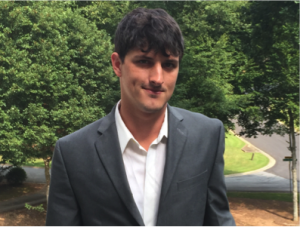 Nicholas Fouriezos ’10, graduated from the Henry W. Grady College of Journalism and Mass Communication at the University of Georgia, and was hired as the Washington, DC correspondent for Ozy.com, a global online magazine that reaches 20 million readers per month. He is currently leading a project called “States of the Nation” that will “visit all 50 states this year to spotlight the political innovators and innovations in each one.” 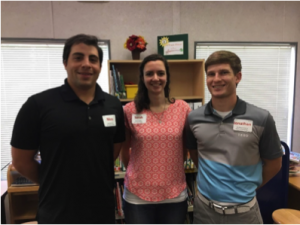 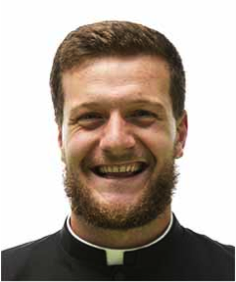 Michael Metz ’08, a seminarian for the diocese of Atlanta, will be ordained a deacon May 27th, 2017. After becoming a priest, he will serve in the Archdiocese for the Military Services.