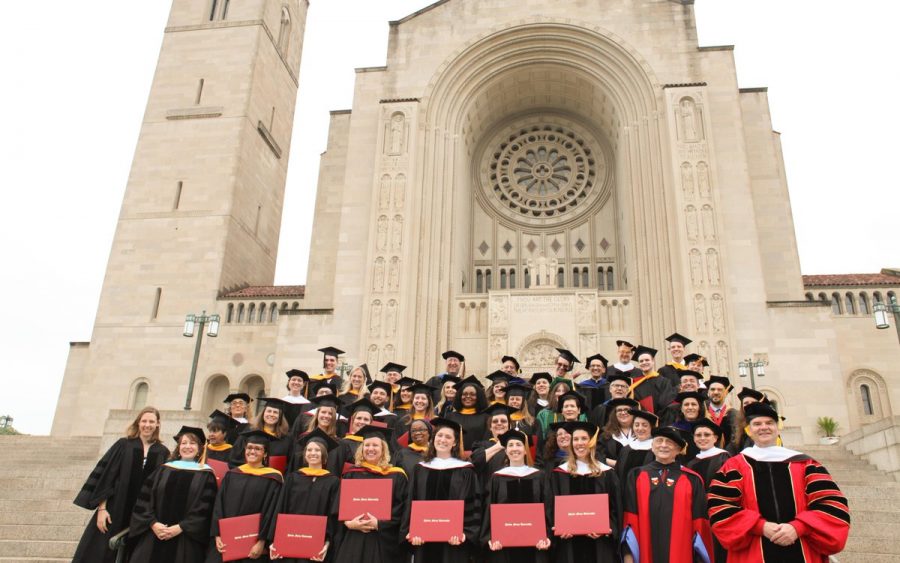 On May 18, 2018, Divine Mercy University celebrated the graduation of 45 students at the National Basilica of the Immaculate Conception. The Keynote Speaker was Dr. Ben Carson, Secretary of Housing and Urban Development.

The ceremony began with a Mass presided over by Bishop Michael Burbidge of the Diocese of Arlington, Virginia.

Fr. Charles Sikorsky, LC, president of Divine Mercy University, preached the homily. He spoke of the parable of the vine and the branches, reminding the graduates to remain attached to Christ. “If we remain attached to the vine,” he said, “we can overcome all human limitations. Today’s Gospel gives us great reasons to trust in the Lord.”

Fr. Charles also told the story of a graduate whose psychological training now helps him serve patients in a hospital where 80-90% of those cared for have suffered some form of abuse. He left the graduates with two exhortations: “Never forget the why” and “Do everything with love.” 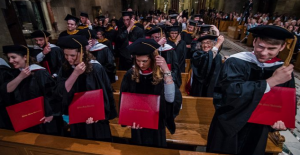 Dr. Ben Carson received an honorary doctorate. He began his speech by saying, “I’m greatly humbled by the dedication of this university to its mission, and by the commitment of graduates that embody that mission, seeking to ensure the moral resolve with which we should go forward in our professions to serve others in a Christian way.”

“I think God gives each of special talents,” Dr. Carson said, adding that discernment of his own talents helped him determine which branch of medicine he would go into. Addressing the graduates directly, he continued, “There’s something each one of you is better at than everyone else here. And one of the things that really leads to great success is recognizing what it is.”

The HUD secretary also addressed the needs of our culture, saying, “We have enormous challenges with mental illness in our country, and we need to be healers.”

Dr. Carson concluded, “You’re all going to have tremendous spheres of influence. Can you imagine how many people will be impacted by what you do, what you say, how you act?”

Dr. Peter Martin, PsyD (class of 2009), received the distinguished alumnus award. Dr. Martin explained to the graduates, “You will learn more about your calling to heal than your academic training could have possibly equipped you [for] before today. Embrace the sometimes challenging years of transformation to come in your work with your clients, and grow in wisdom and virtue in the Lord as his faithful disciple.”

Afterwards, Fr. Charles described the ceremony as a “great event.” Commenting on a recent letter from the California Bishops seeking to reduce the stigma of mental illness and to take away the fear of coming forward, he noted, “Churches can play a major role in that.” He also explained, “Faith and science need to work together to heal a person; a holistic approach of body, mind and spirit is so important, and that’s what we’re working on at DMU.”

You can watch a video of the graduation on Facebook or YouTube, and you can see a collection of social media about the event on the DMU blog.