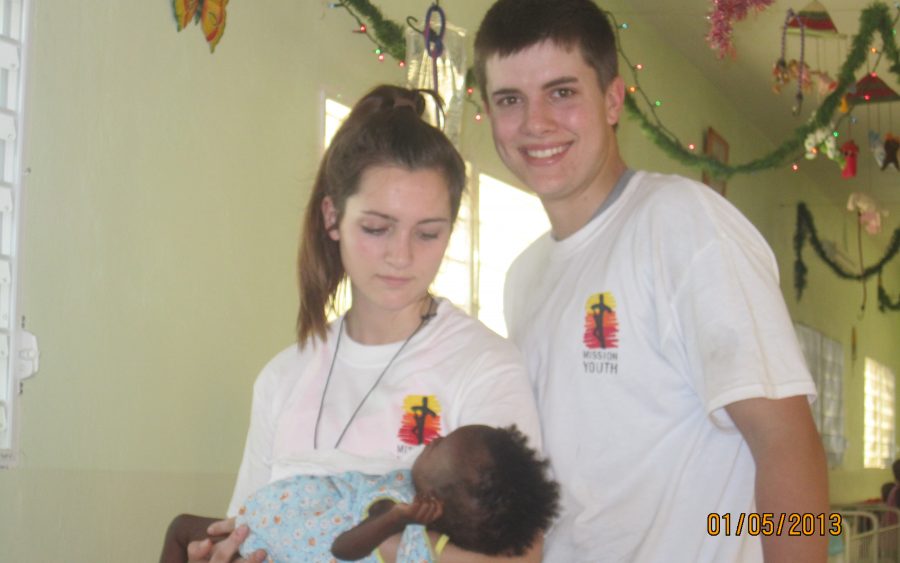 Most average readers likely would have little difficulty meeting the requirements for a high-school diploma in the state of Nebraska.

Nebraska requires students to complete a minimum of 200 high school credit hours before qualifying for graduation. A minimum of 80 percent of these hours must be completed in core curriculum subjects. According to The Education Commission of the States, www.ecs.org, the requirements for high school graduation are as follows, but check with your local district for a more detailed list:

Of course, families may add their own “requirements” for their offspring:

And…if you grew up in the family of Regnum Christi members Donna and Jeff Garrett of Omaha, Nebraska, you had to go on at least one extreme mission trip to a foreign country. To be clear, the foreign location won’t be Paris or Barcelona; it will be off the beaten track, a place that lacks Starbucks and Walmart – and probably always will.

Mission is in the blood and soul of the Garretts – and probably always will be.

Cradle Catholics who had always been involved with their local Church, they become involved with Regnum Christi in 1999. Donna joined first, after participating in a parish renewal program that convinced her that God was asking her for a deeper commitment. Jeff joined six months after Donna. Their lives – and the lives of their four children (Katie, Chris, Aly, and Zach, now grown adults) – would never be the same.

The Garretts admit to being a “mission” family and have been involved in the full range of Regnum Christi apostolates. All members of the family have been on foreign missions to either Mexico or Haiti. “In many ways, our involvement in various apostolates has followed the development stages of our children,” Donna says. As a result, when first involved with Regnum Christi, they became small-group leaders in Familia, helping other young couples learn the Church’s plan for their lives.

Donna and Jeff and the kids were involved with Challenge, Conquest, and ECyD early on. Mom and dad both served as club presidents. That involvement lasted nearly a decade, but as the kids got older they transitioned to missions. And whenever possible, they did missions as a family.

The Garretts also led summer leadership camps for young men and women for the better part of a decade. And they launched mission programs at a local high school and Benedictine College, taking students from those schools on missions to foreign communities in need.

Jeff and Donna also have served as team leaders and section directors. It might be hard to recall all the ways of apostolic service they have embraced. Today, as empty-nesters, the Garretts work with young couples as professional and spiritual mentors; they provide the same counseling for priests and seminarians. And they share their experience and wisdom in various RC leadership courses, most recently for an international program for young men.

In addition to all of this, Donna has spent the past five years as a member of the Regnum Christi Territory Committee. Under the new RC structure, that group will be phasing out and so will her assignment. However, she will retain her other volunteer job the North American Territory Delegate for Apostolate and will continue to serve on the territory’s Mission Support Team.

For his part, Jeff provides business consulting for various RC localities and apostolates. And he is the driving force behind The Regular Catholic Guy, a weekly blog and podcast designed for, well, regular Catholic guys.

Although they are deeply involved in Regnum Christi apostolates, the Garretts have served on their local bishop’s advisory board and the parish council.

“It is vital for us to meet with local pastors about any apostolic work we are doing,” Jeff says. “We need to understand their needs and start by giving them the support they need.” “We consistently have served the parish, whether through a parish ministry or RC apostolate,” Donna says.

That has led to the Garretts taking on various parish tasks over the years – from cleaning the church to gardening to babysitting.

“You simply have to ask the pastor what he needs,” Jeff says.

If you have read this far, you likely would expect that the Garretts are extremely proud of all they have done serve the Church and promote Regnum Christi. But they are quick to point out that what is most important for them, what they are most grateful for is 31 years of marriage, four children – and the recent addition of their first grandchild.

They identify themselves as a mission family and believe that for Regnum Christi to succeed in the future it must attract the entire family.

“If we want to grow Regnum Christi in today’s demographics, we have to attract the couple,” Donna says. “We need to minister to married couples by realizing that a married person’s primary vocation in life is marriage.”

Their home is an open door to the Legionaries, the Consecrated Women of Regnum Christ, and other members of Regnum Christi who travel through Omaha. They are known for great steak, good wine, bourbon, and the man cave.