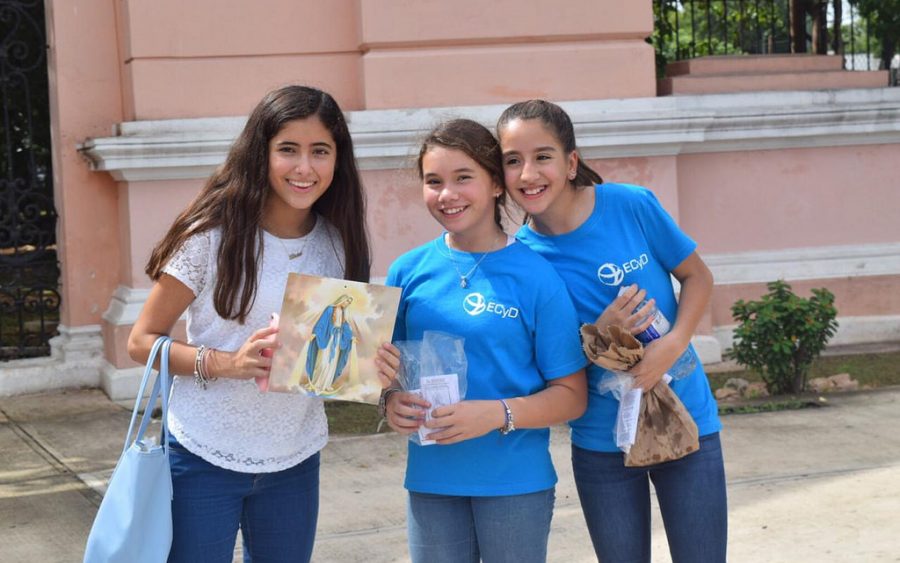 In Acapulco and Mérida, ECYD members participated in an event called “Totus tuus” where they handed out rosaries and encouraged people to pray them.

The name of the activity arose in honor of the papal motto of John Paul II, “Totus tuus” which comes from the abbreviation of the consecration of St. Louis Marie Grignion de Montfort, “Totus Tuus ego sum et omnia mea tua sunt,” which means, “I am all yours and all that is mine is yours.”

On Saturday, October 20, children, adolescents and parents belonging to the ECYD Mérida did “Totus tuus.” The event began with the meeting of the participants in the Summit Institute at 10:00 am to pray the rosary, then divided into teams in different locations to encourage people to pray the rosary by means of banners, and distributing rosaries and holy cards.

The activities ended around noon, when they met at the Church of Our Lady of Fatima to join the celebration of the Mass, offered in honor of the Virgin Mary.

According to the testimony expressed by Eduardo Peniche, the event was made possible thanks to the good organization of AFIRE and the availability of the children who attended.

A week later on October 29, ECYD youth of various ages, with team leaders and parents, met in the courtyard of Colegio Liceo in the city of Acapulco, Guerrero to recite of the rosary.

They were prayers and songs that cheered the hearts of everyone present. The intentions of this rosary were mainly for all the disappeared victims, for the violence that the whole country suffers, for Acapulco, for the migrants, because abortion is not legalized, for a united country, for peace, for family and friends.

On this occasion the “Totus tuus” was held inside the school due to the violence suffered by the city and not to expose the young people in the streets as it was done previously.

Because of the situation of violence that Acapulco is experiencing, the members of the Regnum Christi Movement of that locality faithfully believe that by praying and asking Jesus Christ with all their faith, it will help them to improve this situation that keeps the whole population tense.

This article is a translation of two articles from SomosRC, the Mexican Regnum Christi site.