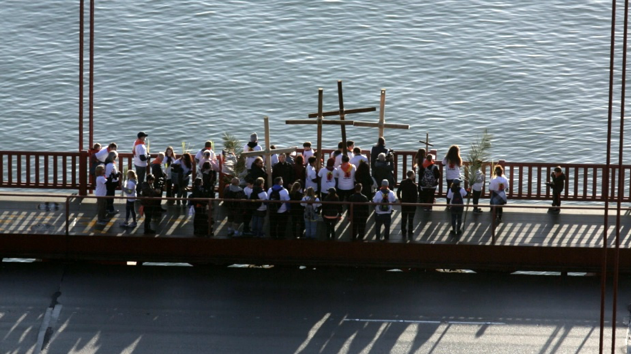 Fisherman’s Wharf in San Francisco is a tourist hot-spot famous for clam chowder in a bread bowl and street performers.  Usually the street artists dwell more on the mundane and superficial, but on Good Friday, nobody would have imagined just how spiritual and deep a “performance” could become! 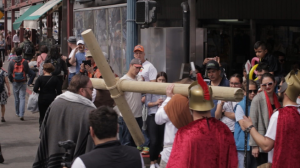 What happened was a flash mob.  It involves a large group of people planning a spontaneous event such as a song and dance in a public area.  They set themselves up secretly within the group as if they just happened to be there. However, one by one they shed their alter-egos and join into a performance that grows into a crescendo.

A group of Catholic millennials from Mission Youth, an apostolate of Regnum Christi, decided to take the flash mob idea and use it as a vehicle for a Good Friday Way of the Cross.  The venue would be Fisherman’s Wharf, a place brimming with tourists during Holy Week. In the weeks leading up to Good Friday, they planned and organized themselves.  Each one of them had a role to play: Jesus, Mary, soldiers, Simon, Mary, Veronica to name a few.  They memorized the script, donned their costumes and then secretly took up their positions among the tourists.  Lights, camera, Jesus!

“It was an unforgettable experience,” said one of the kids named Juliana. “I grew up hearing the story of Christ’s Passion, but last Holy Week, it came to life.” 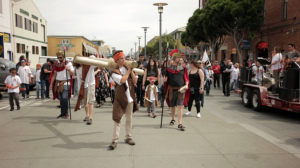 A young Catholic priest was one of the inspirations behind the event. His name is Fr. Justin Kielhorn.  “I work with Millennials a lot.  They don’t want to simply be passive in Church. They want a Mission-Church.  They like to take their faith into the streets.  Kind of like Pentecost!”

The group also helped feed the homeless, gave out free coffees and hugs on Easter morning to cheer up those passing by, and even took the cross across the Golden Gate bridge.

“As a Church, we need to embrace the millennials missionary dynamism.  It is a breath of fresh air for our Church which at times behaves more like a club with membership dues rather than a welcoming and rejoicing group of people who have a message to spread” said the director of Mission Youth, Fr Michael Mitchell. “I can’t wait to hear what these kids do next year!”

–How to Set-up a Holy Week Mission