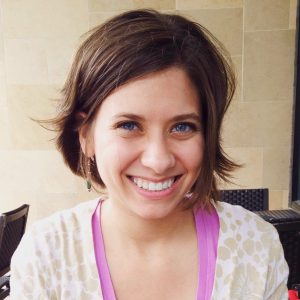 Growing up on a Nebraska farm, Katy Janousek only knew diocesan priests. Coming to Divine Mercy University for graduate psychology studies she found some Legionary priests who gave her a new perspective on her faith.

She exclaimed, “I also had never before encountered a religious movement that had a lay branch, and I was really intrigued by that!”

Katy is still finishing her doctorate in psychology but recently joined Regnum Christi. She recently told us about how she did so.

When she was finishing her undergrad, she was looking at different grad schools to continue in psychology. She had a list and DMU wasn’t on it but she ran into some graduates and once she visited, she was convinced.

The priests took interest in her. She had never felt priests interested in her personal growth – both spiritually and in studies – before. She noted: “They were so willing to share the faith.” Janousek also saw the consecrated women helping her, “I began spiritual direction with a consecrated woman, which has been immensely helpful for me in my spiritual walk.”

After being intrigued for a while, Glory Darbellay invited Katy to do a discernment course. “The discernment course helped me learn about the particulars of RC.” She describes, “Everyone there was pretty willing to share how Regnum Christi had touched them. And, then, at the end of the night, everyone just wanted to hang out and just be a community together and learn more about each other.”

She was really impressed how we have the two feast days – Christ the King and the Sacred Heart which have been special to her in her conversion.

In the summer of 2017 Jounsek went on a mission with Regnum Christi to Jamaica. There they encounter people in poverty and served them. “I mostly helped with the elderly, mostly during meal times as many of the people there couldn’t feed themselves and weren’t very mobile.”

Katy summarizes her mission in Regnum Christi: “I have felt called to share Christ with others and have really desired to do apostolic and missionary work. Being a Regnum Christi member has offered me a way to do that with others!” She was impressed by how Regnum Christi used their own gifts to fulfill needs they saw.

When it comes down to it, Katy feels inspired by all those in RC: “I realized what also drew me to RC is the people I’ve met who are already in RC, like the Legionaries, consecrated women, and other lay members. Just about everyone I’ve encountered has this quality of pure joy, trust, and contentment with their lives, which I sincerely admire. I decided to incorporate because I value spiritual community and walking with others, and it seems this is a central point of the Regnum Christi movement.”

She concluded asking those who read this to pray for her studies and her spiritual journey.