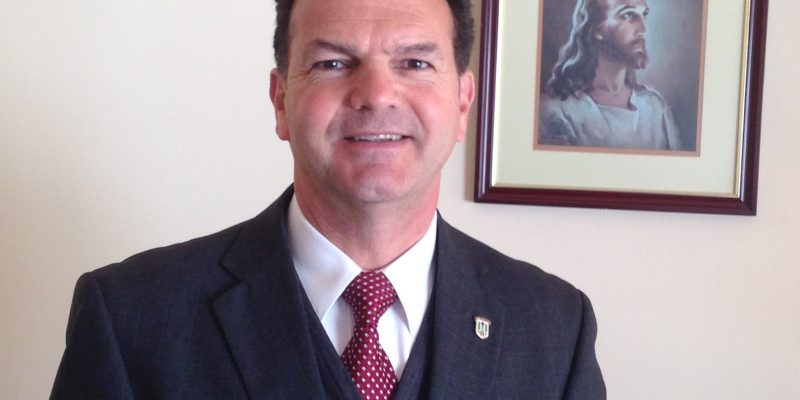 Gerardo Gonzalez recently celebrated 30 years as a Lay Consecrated Man of Regnum Christi. He served in Detroit for over a decade, along with working in locations in Mexico, Poland, and Chile. He reflected on his vocation at this milestone.

An invitation to go to a retreat and to join ECYD changed Gerardo’s life. Since then, he has worked in Mexico, the United States and Chile accompanying Regnum Christi youth in their academic, apostolic and spiritual formation. On August 27, 2019, he celebrated 30 years of consecration in Regnum Christi. What does this anniversary mean to him? What wisdom has he gained serving Christ? How does he understand the vocation of the Lay Consecrated Man in today’s world? His answers are below.

Gerardo González met Regnum Christi between the ages of 13 and 14, when he was invited to be part of a group of friends from his school who met weekly to reflect on the Gospel, do fun activities with sports, and collaborate in various social action missions like visiting orphanages and nursing homes. A year after the group was formed, he was invited to join ECYD during a weekend spiritual retreat.

Later, after a career as an airplane pilot, Gerardo decided to consecrate his life to God in Regnum Christi  on August 27, 1989. What motivated him to take this important step? The answer is very simple, but at the same time very profound: “God’s call to follow him and to collaborate with Him in his plan for the salvation of humanity.”

After finishing his initial formation in Mexico, Gerardo moved to Krakow, Poland, where he lived for six months working on the foundation of Regnum Christi and beginning the social program “World Share.” In 1993, at the end of his philosophy studies in Rome, he returned to North America to collaborate in the youth sections in Mexico City (1993-96) and in ECYD in Detroit (1996-99).

After three years in the United States, he was appointed deputy director of the San Javier School in Guadalajara for a few months and then transferred to the administrative area of ​​the Anáhuac University South Campus. In 2004, he returned to Detroit to cover various functions in the community at Everest College in Clarkston and in the ECYD section of Michigan.

RC Chile: What memories do you have of the moment of your consecration 30 years ago?

Gerardo González: I have excellent memories of my consecration day; a happiness and deep joy of the soul as I had rarely experienced in my life; an inner peace that gave me security and certainty of being, that I was doing the right thing and making the best decision of my life: choosing Him, Jesus Christ Our Lord in full, because that was his will despite implicit renunciations.

How do you understand your vocation as a Lay Consecrated Man in Regnum Christi and in today’s world?

In its foundation, I understand it as I learned from St. John Paul II when he explained his personal vocation; that is, as a gift and a mystery of God. At the same time, I understand it as a specific vocation within the plan of salvation of Our Lord that contributes its particular wealth by complementing the global greatness of Regnum Christi in the world and the Church today.

What wisdom has your journey as a consecrated man over 30 years given you?

Obviously, the wisdom is of many very different types, because we speak of a great variety of times, places, and circumstances; but the most relevant things are two. First, God is always faithful and is always waiting for us to renew our free “yes” every day so he can continue surprising us with his unlimited greatness and love. Second, I realize the mystery and greatness of each human being, regardless of nation, culture or country. Man has enormous potential, but he only discovers and unfolds it fully to the extent that he knows and loves Jesus Christ, Our Lord, and the teachings that He left us.

What do these 30 years as a Lay Consecrated Man in the movement mean to you?

They mean many things. The most relevant would be a deep gratitude to God Our Lord for inviting me to this wonderful adventure of following him as a close collaborator of his vineyard. Likewise, they mean great joy for the good that God does in the souls of many people and, finally, they mean a solid trust in Him for having given me the grace to opt for “the best part” that this world can offer.

What do you like most about working with young people?

I really like to learn from their greatness of soul and heart, their dreams and great aspirations; but I also like to share the experience that I have lived with my great friend Jesus Christ and the implicit wonders that there are in following him.

What role should young people play in the transformation of the Church?

A role of great importance in prayer and in the action of the Church. As Pope Francis said at the beginning of the year in Panama, “You, young people, are the ‘now’ of God.” Therefore, they are already transforming the Church with their vitality, initiative, creativity and enthusiastic drive.

What do you expect from this new stage of Regnum Christi with its new federation structure?

I hope that we continue to be docile and attentive to the voice of the Holy Spirit, so that we continue to accept the path that shows us in the hands of the Church and Mary, and that we grow in unity and trust in our interpersonal relationships so that we are better witnesses of the wisdom and infinite love of God towards humanity.

You can read the original on the Regnum Christi Chile site.