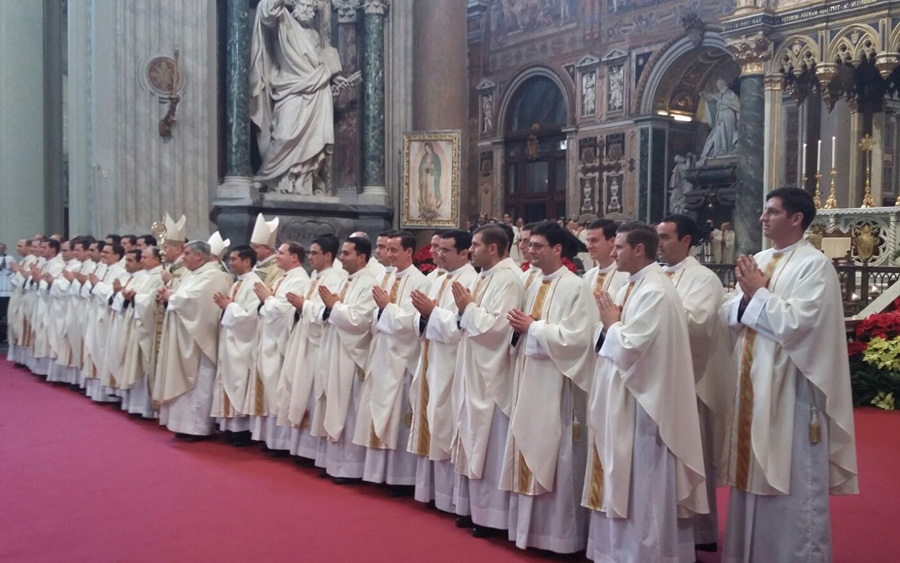 Priestly Ordination of the Legionaries of Christ

Homily of Cardinal Pietro Parolin, Secretary of State of His Holiness

One path brought these candidates to the priesthood today Although they hail from different countries: Argentina, Brazil, Chile, France, Germany, England, Italy, Mexico, Poland, United States, Venezuela, their path has but one source: the reality of being seekers of God, who have allowed themselves to be conquered by him.

Just as the prophet Jeremiah says: “You deceived me, Lord, and I was deceived, you overpowered me and prevailed.” (20:7) They have also allowed themselves to be overcome by Christ, just like the apostle Paul (Phil 3:12). They have resolved to put Christ in first place in their lives, as St. Benedict says in his Rule: “Nihil amori Christi praeponere” Prefer nothing to the love of Christ (IV, 21).

We are grateful to the Lord for having called them. We are grateful as well for all those who have helped them to reach this step: their families, their parishes where they grew up, and the religious congregation Legionaries of Christ, especially their teachers and spiritual directors.

It is a pleasure for me to remember all of you in prayer, and to greet with gratitude all those present: bishops, priests, religious, and the faithful who with their presence give solemnity and joy to our celebration.

Dear candidates to the priesthood, you are consecrated to the Lord and sent forth as missionaries of the Gospel amongst all people. It is the Holy Spirit that, through the imposition of the hands and the anointing, makes you capable to serve as ministers of the Lord to the people of God. Through you, every believer will be able to encounter Christ through the proclamation of the Word that saves, the celebration of the sacraments (the efficacious signs of his presence), that transform and sanctify us, and through that pastoral charity which should drive every moment of your life. As St. John Paul II wrote in Pastores Dabo Vobis: “The internal principle, the force that animates and guides the spiritual life of the priest inasmuch as he is configured to Christ the head and shepherd, is pastoral charity… the virtue by which we imitate Christ in his self – giving and service. It is not just what we do, but our gift of self, which manifests Christ’s love for his flock.” (n. 23)

The words we read in the first reading, with which the prophet Isaiah expresses his understanding of his mission, acquire a special meaning for you today: “The Spirit of the Lord God is upon me; because the Lord hath anointed me” (61, 1). The true protagonist of the sacred action we are about to perform is the Spirit of the Lord, who in a few moments is going to consecrate you with an intimate and ineffable anointing so that you become living instruments of the one Shepherd. In this way, you will share in a unique way in the priesthood of Christ and will act in his name. It is God who consecrates you with his anointing. It is the Lord who sends you “to preach good tidings unto the meek; to bind up the brokenhearted, and proclaim a year of grace for the Lord.” You are called to be luminous signs of his faithful and merciful love. A love that never tires to search for every  one of his sons and daughters. A love that never gives up, even when it encounters indifference or hearts that in their distress and confusion, remain closed on themselves.

In the second reading, from the letter to the Hebrews, we heard “Every high priest is selected from among the people and is appointed to represent the people in matters related to God.” (5, 1). The sacred author stresses the common nature of the priest and other men, while stressing also the goal of his mission: he is at the service of others, he needs to give himself completely for his brothers and sisters. All of this is   carried out in a fundamentally spiritual and supernatural perspective: it should come about in a “religious” way.

Dear friends, yours will not be a life of rejection or evasion from the world, but rather a serene incarnation in history, so that all who cross your path may live the religious dimension, that is, their relationship with God, to the full. This relationship with the Lord can never be  removed from human existence. In this apostolic action, it is necessary to avoid the mentality of the world.

We know well that this is a danger that Pope Francis continually warns us about when he speaks of “spiritual worldliness” as “the greatest risk for the Church,” moreover as a “catastrophe for the Church.” In 1953 in his book “Meditations on the Church” Cardinal Henri de Lubac, foresaw the theme of spiritual worldliness and defined it as “the greatest danger for Church — we who are the Church — the most cunning temptation, that which insidiously is always born again, when all others are conquered, since it is even fed by these victories.”

For this reason Jesus, as the gospel reminds us, does not pray for the world, but rather for his disciples, so that the Father will protect them from the enemy and that they might be freed and different than the world even living in the world (Jn 17: 9,15). In that moment, at the end of the Last Supper, Jesus elevated his prayer of consecration to the Father for the apostles and for all priests throughout the ages when he said, “Consecrate them in the truth” (Jn 17:17). And he added, “For them I consecrate myself, so that they may be consecrated in the truth” (Jn 17:19). To become a priest in the Church, means to enter into the self-giving of Christ, through the sacrament of holy orders, and enter into it with one’s whole self. Jesus has given his life for all, but in a special way, he consecrated himself for those the Father had given him, so that they would be consecrated in the truth, the truth that is Christ himself. In this way, they could speak and act in his name. They could represent him, prolonging his saving gestures: breaking the Bread of Life and forgiving sins. In this way the Good Shepherd offered his life for all his sheep, but gave it and gives it still in a special way to those that He himself, with a brother’s love, has called and calls to follow him in the pastoral ministry.

Celebrating the Eucharist, you are helped by the grace of the Holy Spirit so you can experience the joy of being loved by Christ. May your lives be conformed to Christ the priest, the missionary of the Father. The Lord has chosen you, loved you and guided you to offer your life to him and for you brothers and sisters. Your ordination puts in front of you so many brothers and sisters, already part of the Church or sincerely seeking God. You are called to bring to them the light of Christ, the good news of his coming to look for us, with unheard of gestures of generosity, with a delicate love that knows no comparison. I urge you to show to all in your lives that humility and simplicity which Christ lived and through which he strived to win our trust and save us.

May the Virgin Mary, who sang in her praise the greatness of humility, make you humble and thankful just as she was. In this way, you will cooperate ever more effectively with the Lord in his outpouring of love and truth, which shine as a light to the world in the humility of the Son.

May the saints whose devotion is well known in your countries accompany you. We pray for their intercession, so that the Holy Spirit that is being poured out in abundance on you, may extend also over the whole family of the Legionaries of Christ so that all of its members may be faithful to their own calling and to their ministry. May the whole Congregation continue to walk with generosity and courage along the pathway of renewal and gospel authenticity, following the indications given in part thanks to the work of accompaniment of the Holy See for the greater Glory of God, for the service of the Church and for the salvation of the world. Amen.