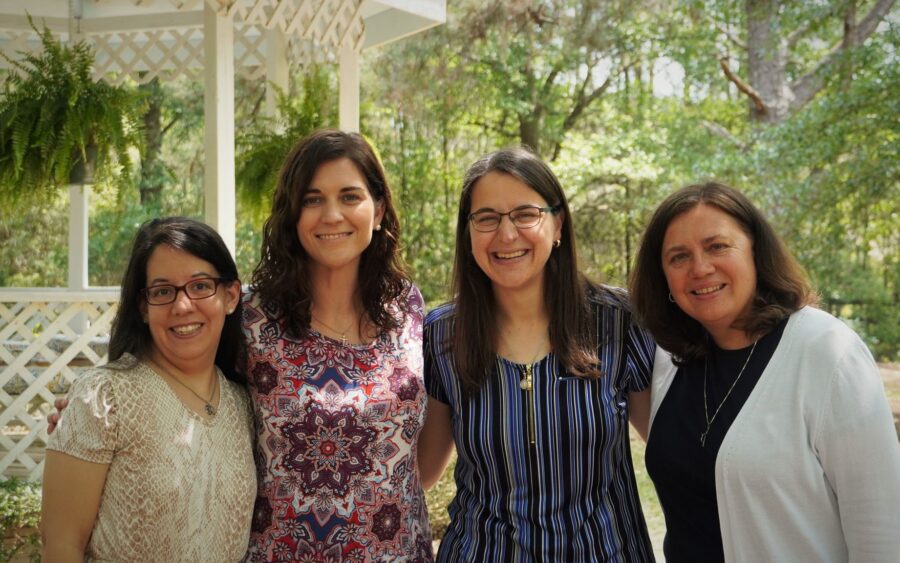 The Consecrated Women of Regnum Christi have a long history of visiting and serving in the Louisiana area, but now, they’ll be calling Louisiana home.

Several years ago, the Consecrated Women of Regnum Christi in the North American Territory, under the direction of the then territorial director, Nancy Nohrden, were tasked to create a new strategic plan for the consecrated women and their communities. This plan, to be developed through deep discernment, was to take into account the current lived reality of consecrated communities, as well as prepare the way for future possibilities of mission and growth. The fruit of this time of discernment was the development of a strategy designed to strengthen the fraternal life of the consecrated women, not only by explicitly clarifying the raison d’être of each individual community already in existence, but also by opening the door to establishing one or two brand-new communities in the upcoming years; with this new configuration, the consecrated women hoped to create strong, smaller communities in more centers. 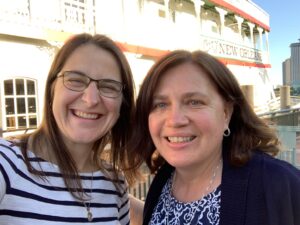 Maria and Lorianne began the process of establishing the new community by visiting Louisiana each month and meeting with the Regnum Christi leadership there, eventually developing a financial plan for the community, establishing relationships with the dioceses, and beginning to share mission with the Regnum Christi members in the area. In March of 2021, the Consecrated Women of Regnum Christi received the formal canonical permission of the Archbishop of New Orleans to establish a community, and the General Director canonically approved the establishment of the community on March 19th. Four consecrated women – Maria and Lorianne, as well as Margie Lademan, and Becci Sheptock – will be the founding members of the Louisiana community, and their primary focus will be to support youth and young adult work, particularly college-age and vocational accompaniment, and to assist in the formation and accompaniment of ECYD and Regnum Christi formators. 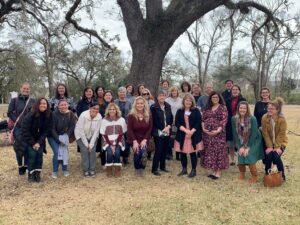 But Louisiana isn’t new territory for these four women of the new community, or for the consecrated women in general – for over three decades, road teams have spent most of their month serving in the area. And for Maria Knuth, who has been consecrated in Regnum Christi for almost 21 years and has just moved from the community of consecrated women in Cincinnati to New Orleans, where she will primarily be supporting ECYD and the Young Women and Women’s Sections, starting this new consecrated community in Louisiana is less of a brand-new beginning, and more of a continuation of the work begun by her consecrated sisters years ago. “Being able to come here is a joy and a gift of building on so much goodness given by the consecrated women and all the Regnum Christi members over the past 25 years,” says Maria. “I feel absolutely blessed to be able to not only found a community, but to found one here, and have been so inspired to be sharing mission with the incredible people of Louisiana. It has been a personal gift from Jesus.”

The establishment of the new consecrated community in Louisiana is just another sign of the continued growth of Regnum Christi in the area – in fact, the Legionary house in Mandeville recently required an addition of three new rooms to accommodate the nine men – seven Legionary priests and two lay Regnum Christi missionaries – who live there. There are approximately 350 Regnum Christi members in the area, serving in a variety of ministries and apostolic activities, including ECYD, Conquest and Challenge Clubs, spiritual retreats, summer camps, and missions, both local and abroad. 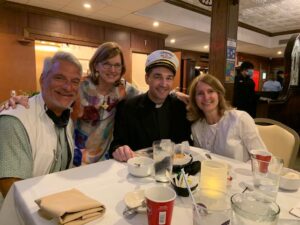 Regnum Christi New Orleans (one of the five Louisiana sections, which also include Northshore, Baton Rouge, Lafayette, and Lake Charles) recently hosted a Mass on April 11th at St. Louis Cathedral in Jackson Square in New Orleans’ French Quarter, celebrated by Father Jacob DuMont, LC, and three of his brother priests. Immediately following the Mass, those in attendance walked toward the Mississippi River to the City of New Orleans riverboat, accompanied along the way by the sound of joyful Catholic hymns being played by the riverboat’s calliope player. The group enjoyed a riverboat cruise, planned by a committee of Regnum Christi members spearheaded by Pattie Hron, Darlene Robert, and Stacy Pellerin, and emceed by Father Jacob himself (while wearing his “captain’s” hat!).

The evening included a gala dinner and auction fundraiser, but the highlight for those in attendance was the opportunity it provided to welcome the new community of consecrated members moving to Louisiana and, in particular, to thank the local clergy in attendance for their dedication to their vocation and service to the local dioceses. Long-time Regnum Christi member, and the current section director of the Regnum Christi Women’s Section in New Orleans, Ann Stevens, who hosted the dinner cruise along with her husband, Gordon, describes the evening as one full of gratitude and God’s grace:

“A major highlight of the evening was the opportunity given to thank Archbishop Gregory Aymond (archbishop of New Orleans) for joining us, along with many diocesan priests who the Legionaries of Christ and Regnum Christi members have become closer to through our work in local parishes. A large round of applause was enthusiastically given for all of the priests in attendance as they were asked to stand – it was definitely a ‘God moment’ celebrating our holy priests! The love, joy, enthusiasm, and gratitude of all for being able to celebrate our Catholic faith with our Regnum Christi family and friends permeated the entire evening!” 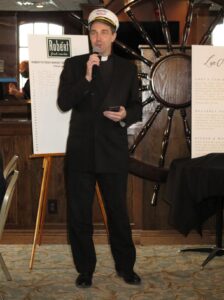 The dinner cruise also served as a send-off to Father Jacob, who has served as the first local superior for the Legionary community in Louisiana for the past seven years. Working with the local bishop and clergy, especially Archbishop Aymond, to collaborate with and support the local church, the Legionary community in Louisiana continually strived to create strong brotherly bonds with the diocesan clergy in service to their parishioners. Over those past seven years, Father Jacob has also been the chaplain for the New Orleans chapter of Lumen Inititute, which he helped to establish three years ago, has been a spiritual director for seminarians at Notre Dame Seminary, and has served in an enormous number of ministries and apostolic initiatives – many of which he helped to launch – in cooperation with other local ministries within the Louisiana locality. He also appears on a weekly podcast called Climbing the Sycamore Tree, which presents ways in which men can grow in their relationship with God through personal encounter with Christ. “Father Jacob’s seven years, as the Legionaries’ first local superior in New Orleans, brought forth many amazing fruits,” says Ann. “One of Father Jacob’s amazing gifts is his ability to meet and help network many people together for God’s glory! His communication skills and friendly style make him very approachable by all whom he encounters.”

Father Jacob has recently been reassigned to Atlanta, Georgia as the Territorial Secretary for the Legionaries of Christ North America – Father Gregory Heslip, LC, who has served in New Orleans for the past five years, has been named as the new local superior for the Legionary community.

To find out more about the Regnum Christi family in Louisiana, visit their website at rclouisiana.com.