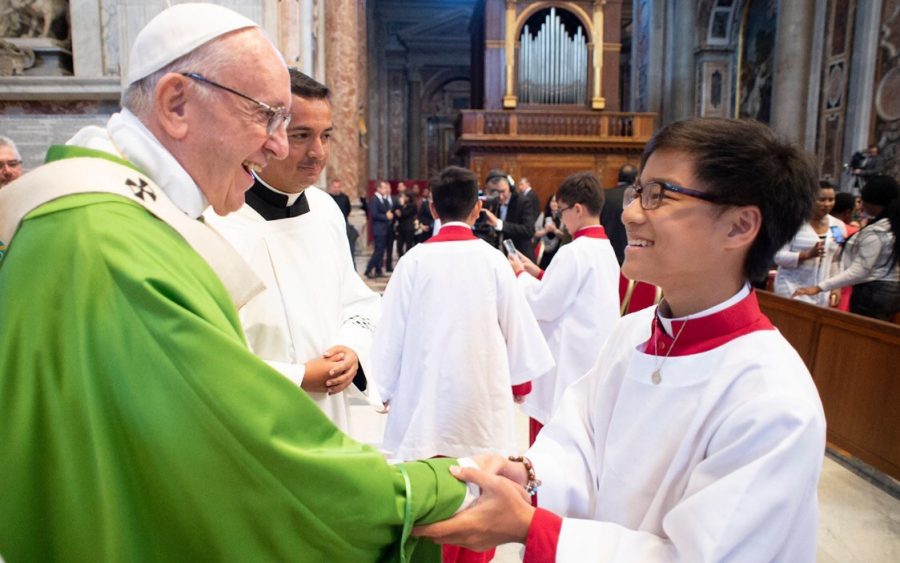 Twenty-four students from Everest Academy Manila (Phillipines), from grades six through 10, recently traveled to Italy to train as altar servers. Members of Knights of the Altar, they spent June 23 to July 11 training and having fun. For most of this time, they stayed at the Casa di Santa Maria in Val Formazza, Italy, and at the end of their trip they met Pope Francis and served at Mass with him.

Mio P. Medrana, one of the teen participants, said that meeting Pope Francis was a dream come true—but it was a privilege he had to earn. Medrana  said he and other participants “had to complete challenges which revolved around a virtue, such as give food to a homeless person to practice the virtue of generosity.”  He concluded, “This amazing experience inspired me and taught me that dreams do come true, but to reach your dreams you have to work for it.” 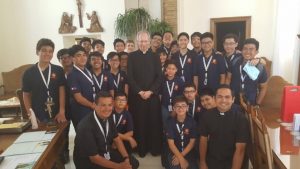 Knights of the Altar is an organization within ECYD, the teen division of Regnum Christi, that focuses on young men who serve Mass. Like all EYCD programs, this one seeks to meet teens where they are and help answer their questions, building up their encounters, convictions and decisions. As the organization describes itself, “In serving God in the daily masses, we are forming the hearts of future Christian leaders in our society, people willing to spend [their] entire life in helping the less fortunate, [to] make our society an authentic culture of love and care.”

Enzo Tanjutco, one of these young Knights, commented on the trip to Italy: “I was able to make strong bonds of friendship with my companions and friends,” he said, “but especially with Jesus Christ. My love for Him grew in a special way in this Vatican trip, and I could have great training opportunities in Val Formazza and in Rome.”

At the end of the trip, the group traveled to Rome for three important meetings. First, they met with Msgr. Guido Marini, the Pope’s master of ceremonies, and had time for questions about Pope Francis and how Marini helps him. Second, they took part in a Mass at the worldwide headquarters of the Legion and Regnum Christi with Fr. Eduardo Robles-Gil, LC, where they renewed their friendship with Christ in ECYD. Finally, they served a Mass with Pope Francis and greeted him afterwards.

They practiced serving Mass in all these different places, but they also had fun, such as climbing a mountain more than 10,000 feet high.

Several of the participants shared their testimony about meeting the Pope and how the experience has affected them.

Santi Violago-Tanjutco said, “I believe that meeting Pope Francis has affected my faith in many ways. The fact that I was able to celebrate the Mass with him, and even shake his hand, is a true honor. After meeting him, I felt different in a way. I started to pray more often, and I also visited Christ in the Eucharist more frequently than before. Also, I was more conscious of my actions and words, especially towards others. I also got to talk to more people about my faith, and I have continued to spread the Word of God.”

Vasco Tam Esquivel, one of the youngest participants, had a special sign of affection from Francis. “I recently celebrated my birthday before meeting the Pope,” he said. “Fr Felipe, our school chaplain, told the Pope it was my birthday, and the Pope touched my left cheek as a form of greeting me. I felt an indescribable feeling of joy as he touched my face and shook my hand.”

Shaking hands with the Pope was also a moving experience for Nathan Angelo Oseña. “I was really nervous,” he said, “because he is the holiest Father and the Vicar of Christ. The moment I shook his hand, I felt the amazing grace from the Pope and felt that I was much closer to God than before. I saw him as a gentle father and a friend, as if I had known him for a long time. He was very gentle and kind-hearted, and it was an experience like no other.”

You can watch a video of highlights from their trip.

And a video about this apostolate in Manila.