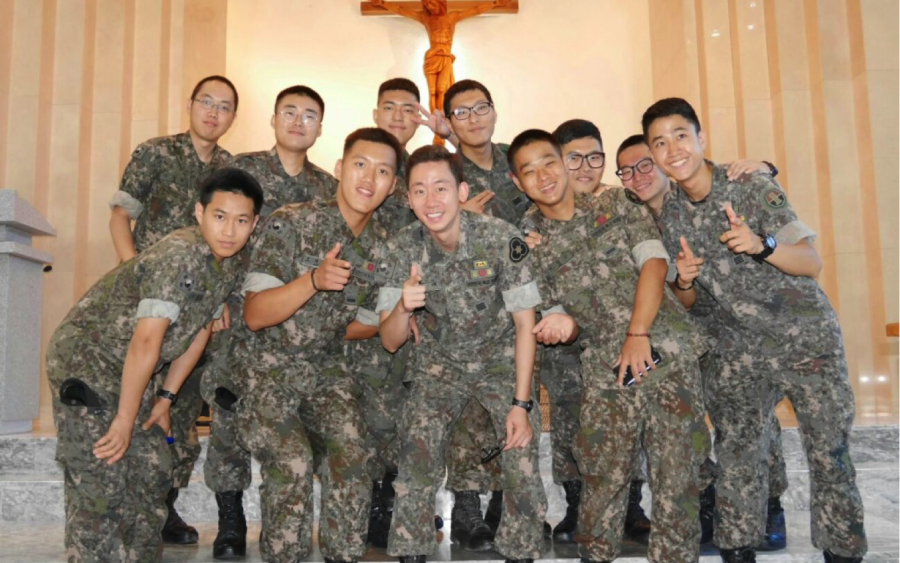 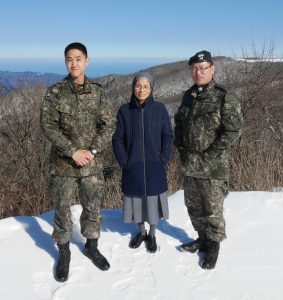 Br Abraham Eo LC joined the Legion back when he was 16 but that didn’t exempt him from military service in the South Korean military. South Korea requires 2 years of military service from all men between 18 and 35. The Legion has decided that South Korean Brothers will do it as their first years of internship (right after philosophy). Right now Br Abraham is transferring to Cincinnati to continue his apostolic internship. We share this as part of our series for National Vocation Awareness Week. The rest of this article is Br Abraham’s testimony in his own words:

“The woman conceived and bore a son; and when she saw that he was a goodly child, she hid him three months. And when she could hide him no longer she took for him a basket made of bulrushes, and daubed it with bitumen and pitch; and she put the child in it and placed it among the reeds at the river’s [Nile’s] brink.” Exodus 2:2-3.

My story is like Moses’ which we read in the beginning of Exodus: my South Korean military experience is similar to what happened to Moses as a baby. In my country every man is obliged to participate in military service due to the conflict with North Korea, and there isn’t even exceptions for seminarians like me.

I left my country at 16 to enter the Legion’s apostolic school and since then I’ve lived in ths USA, Ireland, Mexico and Italy over 8 years. After philosophy, I returned to Korea for military service. I entered the military on December 1, 2015 and it has been a great adventure.

Overall, I spent most of my time at a military parish as assistant to the military chaplain (parish priest in the military). When I started, I didn’t know what to expect or which part of the military they’d send me to, so I entered without looking for a particular unit. The day I entered, they asked me if I could drive – which I can – and shortly after they said I’d be a chauffeur. Three days later, we start basic training for five weeks, teaching us all we need to know as soldiers: we learned how to treat high-ranking officers and always obey, keep order and use different weapons. Personally, I was accustomed to community life having lived it eight years, and was used to early rising each morning. I even got first place in the physical exams. I was doing well.

Little by little, I became friends with my fellow soldiers and I realized that they each had unique backgrounds. Some studied in universities, others were out of the country for various reasons, and there were many kids coming right from high school. One soldier with me was three years younger but had gotten in trouble with the law.

As time went on, I got to know each person better, and realized how different my life had been from the others. Not even one of them believed in God! Such a secular atmosphere made living my faith tough: nonetheless, I woke up an hour early to pray and said my rosary every night before bed.

After five weeks of basic, I went on to special training on how to handle military cars. There were four sizes maxing out at a bus but they told me I’d dedicate myself to driving the smallest type of car. One day during this training, I had an interview with two officials who told me that they were looking for a chauffeur for a general and asked me if I’d like to work with the general. I said sure because they’d chosen me for this prestigious job. So I was set to work as this general’s chauffeur after training. This is a four star general – one of 8 in the country – and, on top of that, was a devout Catholic.

But… Something happened before I began working with the general. 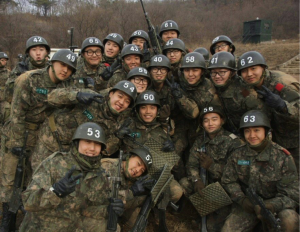 At the base, there was a military chaplain for the soldiers who had a parish to help soldiers and their families. In the parish there was a soldier who helped the priest but he didn’t get along with the priest so the priest was looking to switch him. One day, after Sunday Mass, the parish priest asked me if I could work with him at the parish. So, the priest spoke with the general and from that moment I became a chaplain’s assistant.

From this moment I spent most of my time as a soldier in the chapel or nearby. I prepared for daily Mass, cleaned the house and the chapel and took care of administrative work. I had many moments to remember fondly and also a few “crosses” but in the end, the fact I was near God as a chaplain’s assistant was providential.

Just like Moses kept floating down the Nile and eventually returned to the hands of his mother, so I also went into the army because of South Korea’s needs, and even on a military base I could live in the house of God.

You can also read Br Abraham’s testimony in Spanish.