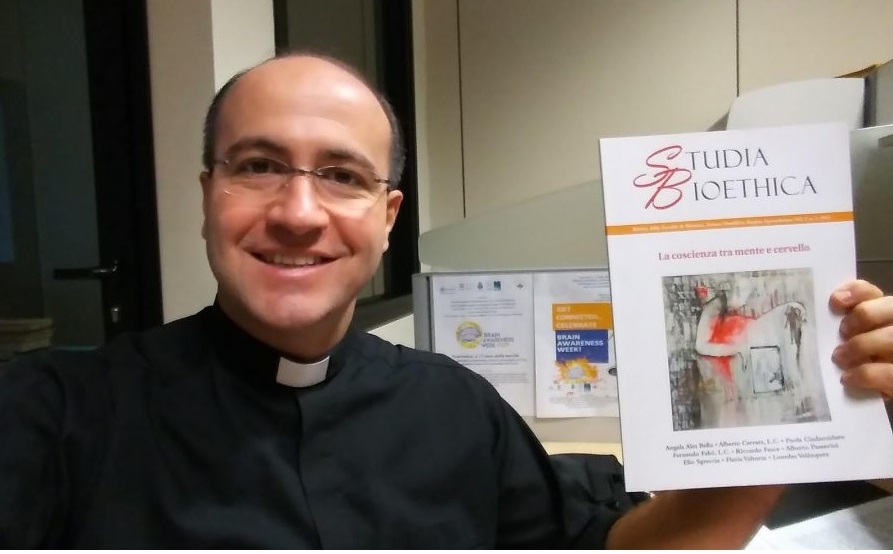 Fr Alberto Carrara LC, a professor at the Legion’s Regina Apostolorum University in Rome, was just named to the Pontifical Academy for Life. He sat down and answered a few questions for about his work on the Academy and elsewhere.

Fr Alberto, you were just named to the Pontifical Academy for Life. What is that and what does it mean to be a member?

First of all, the Pontifical Academy for Life, founded by Pope John Paul II, exists for the promotion and defense of human life, especially regarding bioethics and Christian morality. Its statutes were defined by the Apostolic letter motu proprio Vitae Mysterium on 11th February 1994.

According to the new statutes approved October 18, 2016 by Pope Francis, a corresponding member (also known as an honorary member) is appointed for a term of five years, on the basis of his or her competence and professional expertise, and his or her proven commitment to the promotion and protection of human life. A corresponding member is an intellectual selected from among distinguished experts in fields pertaining to human life (medicine, the biological sciences, theology, philosophy, anthropology, law, sociology and so forth). In my specific case, I was selected especially for my expertise in the field of neuroethics and the anthropological perspectives in philosophy of mind and philosophy of neuroscience.

To be a member means that you become a line of contact with institutes and study centres interested in the culture of life; that you actively take part in the General Assemblies of the Academy; that you keep the Governing Council informed about the most relevant political, legislative and cultural events of the country and about the activities I promoted in harmony with the finalities of the Pontifical Academy for Life. Another special mission for a corresponding member is to draw up papers or studies on subjects that relate to the purpose and the functions of the Academy, in my case particularly on neuroethical issues, such as the neuroscience of consciousness, the neuroscientific research on free will and human responsability.

You mentioned your expertise is neuro-bioethics. How did you get that expertise?

Since 2009 I focused my research, teaching, and writing mostly on neuroethics or neurobioethics. According to the 2015 Springer Handbook of Neuroethics, this field is “a systematic and informed reflection on and interpretation of neuroscience, and related sciences of the mind (psychology in all its many forms, psychiatry, artificial intelligence, and so on), in order to understand its implications for human self-understanding and the perils and prospects of its applications”. Neuroethics has developed as a response to the increasing power and pervasiveness of the sciences of the mind, and it is divided into two branches: the ethics of neuroscience and the neuroscience of ethics. The first one is a special part of the bioethical reflection, while the second, the neuroscience of ethics, is understood broadly, encompassing not only the ways in which the science of the mind can help us to understand moral reasoning, but also the ways in which it might help us to understand other perennial philosophical issues (the nature of knowledge, the ways in which self-control is exercised or lost, free will, and so on).

I came from a scientific background. Since I was 6 years old, I grew in a scientific environment. My uncle was a great organic chemist, director of the European Institute of Photochemistry and Photobiology. He introduced me and my brother to the genetic atmosphere of the 90s. I studied as a laboratory technician and joined the Faculty of Medicine in Padua, Italy in 1999. In 2004 I was proclaimed Doctor in Medical Biotechnology, discussing a thesis that dealt with human oncogenesis. At this point my life changed. I left the scientific world and I joined the Legionaries of Christ. In 2009 I became part of the Italian Neurobioethical Research Group (the GdN), and so I moved from genetic, philosophical, and theological subject to the so-called neuroscientific revolution. I moved from genetic engineering to neuroscience through humanities. This is a summary of my life. Four years ago, I was appointed coordinator of the GdN.

Back to your current position, what is are your responsibilities in addition to the Pontifical Academy for Life?

Well, I am a priest dedicated to the mission of education. In particular, I teach Anthropology, philosophical Anthropology, and Neuroethics at the Legion’s University in Rome Regina Apostolorum, and at the European University of Rome (UER). My programs deals with topics at the interface between philosophy and neuroscience. For example, one of my first seminars in 2011 focused on consciousness and free will between neuroscience and philosophy; another program deals with the relation soul/body or mind/body or mind/brain.

In addition, since 2016 I am the vice-superior of the academic community of the International Center of the Legionaries of Christ in Rome. Moreover, since 2007 I am the person responsible for all the medical care attention of our house (that count on more than 350 religious!). So I can’t get bored!

What do you think some key upcoming bioethical questions are? Both in general and specifically related to Neurology which is your specialty?

I am convinced that nowadays social and structural crisis deals with a deeply misunderstanding of who we are as rational animals or as animal minds, as human beings. Therefore, the problem is anthropological. I guess that present and future topics are those related to neuroethics. In particular, we need to reflect on the neuroscientific and neuro-technological applications in every stages of the human life. As I am going to propose during the General Assembly of the Pontifical Academy for Life on October 6th, two are the main subjects of discussion: consciousness and free will [note: interview conducted just before this date].

What does it mean for you personally to be asked to help the Vatican out directly in this way?

For me it is a great honor to collaborate so deeply at the service of Pope Francis’ Pontificate. I love the Pope and in receiving this appointment, I feel all the hope He entrusted to me and to each one of the members of the Academy. The trust that the Pope gave us is the power we need in order to study and to work hardly in order to renew our vocabulary and the presentation of Catholic Bioethics to the people outside. We need to be an Academy that goes really out, that is able to reach and dialogue with every man and woman, religious or not religious.

What do you think a Regnum Christi member, or any Catholic, can do to promote the Church’s bioethical viewpoint?

For sure, the first and best thing is prayer. Nevertheless, with prayer we need formation. For a Catholic, it is essential, fundamental, and constitutional a constant and integrative formation. A formation that is in favor of binding bridges between people.

This interview was slightly edited for brevity and English style. If you read Italian, you cna keep up with Fr Alberto through his blog.