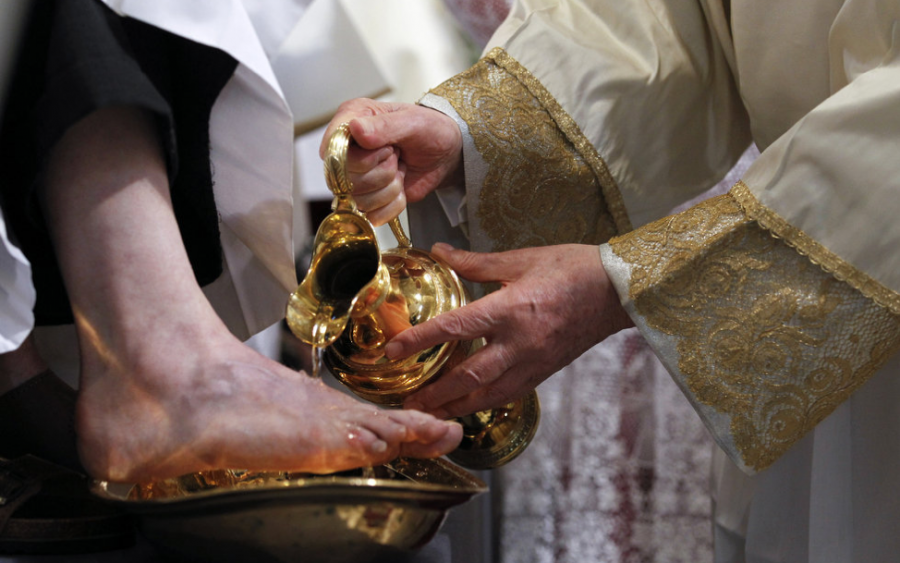 St. Simon and Jude parish in the Woodlands TX (North Houston) takes foot washing very seriously.  That’s right. Holy Thursday 2017 the pastor, Fr Pat Garrett, decided he wanted the Holy Thursday foot washing to be more than just symbolic.  He invited the people in the pews to spontaneously wash one another’s feet and to also leave their shoes at the altar as an offering to the poor.  The result?  An extra half-hour of liturgical foot washing and almost 700 pairs of shoes left behind for the poor!

“It was amazing!” said Charlene Alexander, a consecrated woman of Regnum Christi on the pastoral staff.  “So many people left their shoes behind and went home barefoot or in the 300 pairs of disposable flip flops that had been donated for this moment. Tears of joy and forgiveness abounded as the foot washing was taking place! Sincere embraces were exchanged after each foot washing…this is what moved me as I observed this most extraordinary moment on that Holy Thursday. I had never seen anything like it.”

It was clearly a Holy Spirit moment. The movement of generosity and desire to live this act was contagious. People of all ages were bringing each other forward and washing one another’s feet and leaving their shoes behind…Did Fr Pat realize beforehand what was going to happen?

He said afterwards: “I wanted the people to have the liturgy tied to a spiritual experience and tied to a missionary outreach.  It was prayer, service and mission all in one! I was surprised at just how needed and heartfelt the moment became.”

One could say that Fr Pat has encouraged a way of Christian life in his parish that is discipleship rather than mere catechesis.  Sharing the truths of the faith is one way to evangelize, but it’s incomplete by itself.  Discipleship is more than just transmitting ideas, it’s sharing a relationship. And this is exactly what happened when liturgy became life. “Attempting to catechize families who have not been evangelized is like planting seeds in concrete. It doesn’t work” added Charlene.

Are they doing it again?  This year they are planning a coat drive with similar dynamics.  Hopefully it won’t be too cold out as many people are sure to leave their coats at the foot of the altar!

– How to Set-up a Holy Week Mission

At the beginning of summer, Holly Gustafson challe