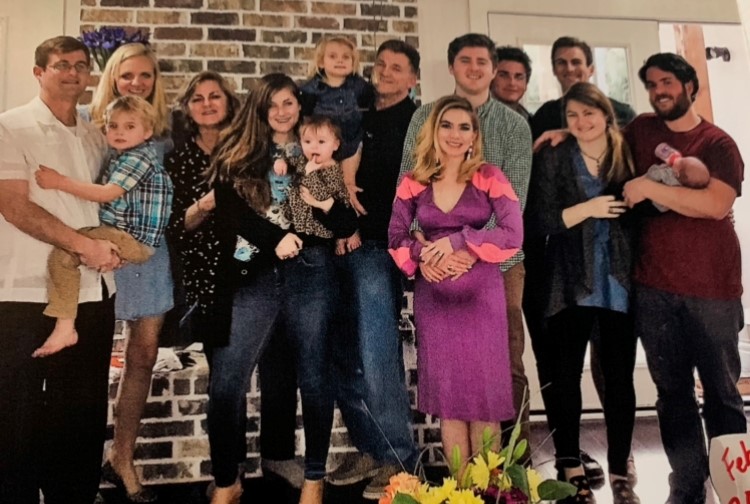 When Andrew and JoAnna Rawicki first met at a Friday the 13th party back in Houston, Texas in 1985, it was love at first sight. They knew immediately that they were meant for each other, and were married by the next year. JoAnna moved to New Orleans where Andrew had been living for the past several years, and the couple was blessed with the birth of a baby each of the first five years of their marriage (and a sixth baby came along nearly 10 years later!). But having a large family of little ones certainly didn’t slow them down – the Rawickis moved on average every 2-3 years, living in New Orleans (twice), California and Houston (three times each), as well as in Australia and Poland. Joanna and Andrew then came full circle, landing in their last work-related location in west Texas, surrounded by pump jacks – a fitting end to a career in oil for Andrew. They are now retired in Irving, Texas, where Andrew serves as the Local Director for Regnum Christi in the Dallas Locality. 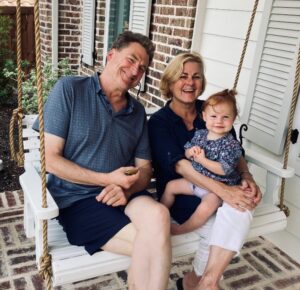 Andrew and JoAnna were married in the Catholic Church because of JoAnna’s faith and desire; she was raised a Catholic since birth. Andrew, on the other hand, had been raised Jewish, and while he had no plans of converting from the Jewish faith, he knew how important JoAnna’s Catholic faith was to her, and so attended Mass with her every week. The Mass sparked a spiritual curiosity in Andrew, and he began an exploration of the Christian faith, reading authors such as C. S. Lewis and Scott Hahn. Upon attending a presentation by a priest at a Catholic gathering in Conroe, Texas, and moved by the Holy Spirit working through the prayers of his wife and his mother-in-law, Andrew answered the priest’s altar call (an unusual element at a Catholic gathering!). He joined an RCIA group and was baptized into the Catholic Church on Easter of 1991, just seven months before JoAnna gave birth to their fifth child.

Andrew’s journey into the Catholic faith impelled JoAnna to seek to deepen her own faith and her knowledge of the Church, and the couple became involved with parish activities, particularly the Pro-Life movement, and took on leadership roles in their children’s Catholic schools and spiritual formation programs. Through involvement in her parish and service to the Church, JoAnna began to feel a desire to live the faith more actively and prayerfully, and it was at this time, in 1998, that the Rawickis moved to the North Shore of New Orleans, where they met the dynamic Regnum Christi Louisiana section. Both JoAnna (through attending open Encounters with Christ, Regnum Christi retreats and events, and the FAMILIA program offered through her parish) and Andrew (by meeting several Regnum Christi men who were living their faith in a clear and visible way) incorporated into Regnum Christi. 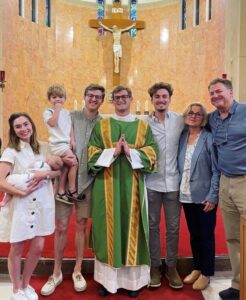 Andrew and JoAnna were continually moved by the truth and mercy they saw exemplified by the Legionary priests, consecrated women, and lay Regnum Christi members that they met. “What struck us both particularly was the reverence with which the Legionaries celebrated Mass, especially during the consecration of the Eucharist, and how they offered such pastoral care during reconciliation,” say Andrew and JoAnna. “Regnum Christi demonstrated to us authenticity and holiness.” The Rawickis often hosted Legionary priests and Consecrated Women of Regnum Christi in their home to meet and spend time with their children and their friends.

For the Rawickis, the charism of Regnum Christi became the foundation of their family as their children grew and developed. When their children were younger, they attended programs like K4J, Challenge, Conquest, family missions, Youth and Family Encounters, camps, and Legionary schools; as they got older, they benefitted from high school youth missions, Ignition retreats, medical and service missions for young adults, and College Leadership semesters in Rome. “We thank God for the gift of Regnum Christi in our family through its many stages,” say Andrew and JoAnna. ”We credit our involvement with Regnum Christi as a huge support in raising our children to love their faith.”

Recently, the Rawickis have had reason to celebrate: their son, Luke, who joined the Legionaries of Christ in 2009, was just ordained a deacon on July 31, at Notre Dame Parish in Michigan City, Indiana! For Andrew and JoAnna, witnessing their son’s deaconate ordination, and seeing him holding the chalice as an ordained deacon, was a gift beyond measure. “It was such a moving experience to see our son lying prostrate, offering his entire self to Jesus and to our Church,” says the couple. “As a boy, Luke was funny, big-hearted and mischievous, and as he grew up, he was always a loyal friend, and a good listener. Thankfully, all of young Luke’s best traits have carried over into his life as a brother and now deacon, and we can only hope that the members of his community and those to whom he is ministering are enjoying his lively spirit!” 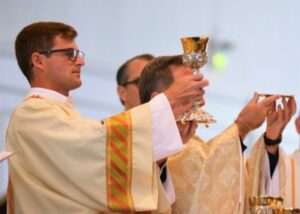 Although Andrew and JoAnna were able to attend Deacon Luke’s ordination, not all of the family were so fortunate; just three days before the ordination, one of their daughters who was planning to attend the ceremony contracted a mild case of COVID and couldn’t make the trip. Six other family members were able to attend the ordination, but had to miss Deacon Luke’s first time administering the Sacrament of Baptism (on the Rawickis’ ninth grandchild!) when the family had to juggle the schedule in order to accommodate a three-year-old’s meltdown. In the midst of a day that should have been filled with sheer joy, Andrew and JoAnna were tempted to lament the shrinking size of their family at these milestone events. But then they recalled the two women whom their son had introduced them to upon their arrival in Indiana for the ordination – this mother and daughter duo, who had known Deacon Luke throughout his years in Washington, DC, had accompanied him, and the other brothers to be ordained, in prayer the entire day before the ordinations. And then there were the other twenty or so pilgrims from Washington who had come to Indiana to experience the ordination and to speak of Deacon’s Luke’s impact on their families. “We realized that our family wasn’t shrinking that weekend, but in fact, it had grown, through the gift of Regnum Christi, to be absolutely immense – and immense spiritual family!” say Andrew and JoAnna. “We should have always known this, being part of Regnum Christi in Louisiana, then San Jose, then Houston, and now Dallas, but we must have needed to be reminded!”

Of course, parenting for the Rawickis was not always easy, and they faced the same challenges that all parents of growing children face. For Andrew and JoAnna, one of the most important things in raising faith-filled children was to allow them to have questions, and accompany them in finding the answers, often by reaching out to Legionary priests and Consecrated Women of Regnum Christi. “To question is good, because it makes the faith their own,” says Andrew and JoAnna. “No challenge was ever out-of-bounds, or too scary to ask, because we believe that any and every question allows for truth to be discovered, and our Church, which Jesus founded, has the answer.

Throughout his life as a Regnum Christi member, Andrew has served in various leadership roles, as a team leader, Men’s Section Director, and Hub City Director for Holy Week Missions in San Jose, to name a few. Upon arrival at their current Dallas locality, Andrew served as the Locality liaison to a Regional Regnum Christi conference with Houston and San Antonio, and was appointed Local Director in 2020. He has also served as board chairman for a pro-life non-profit organization which ran a maternity home in Bakersfield, California. With his wife, he has completed several training courses at the Theology of the Body Institute, and just this summer, Andrew received additional training in preparation to teach this critically important material to 8th and 10th graders at The Highlands School, a Regnum Christi school in Irving, Texas, beginning next semester.

JoAnna is currently a Regnum Christi team leader, and has always enjoyed taking on roles in the various Women’s Sections she has been a part of, and leading youth-oriented apostolates. Other family members have been involved with missions, Encounters with Christ, World Youth Day and other pilgrimages, Young Catholic Professionals, the Saint Thomas More Society, and Natural Family Planning training.

Deacon Luke is currently serving in Monterrey, Mexico. He hosts a podcast with fellow Legionary, Brother Andrew Torrey, LC, called TGIFF (Thank God It’s First Friday!) where they discuss issues in the Church and life as a Legionary, and explore those questions and challenges of faith to which Andrew and JoAnna always encouraged their children to find the answers. You can catch the podcast on Facebook or YouTube, or on your favorite podcast platform.