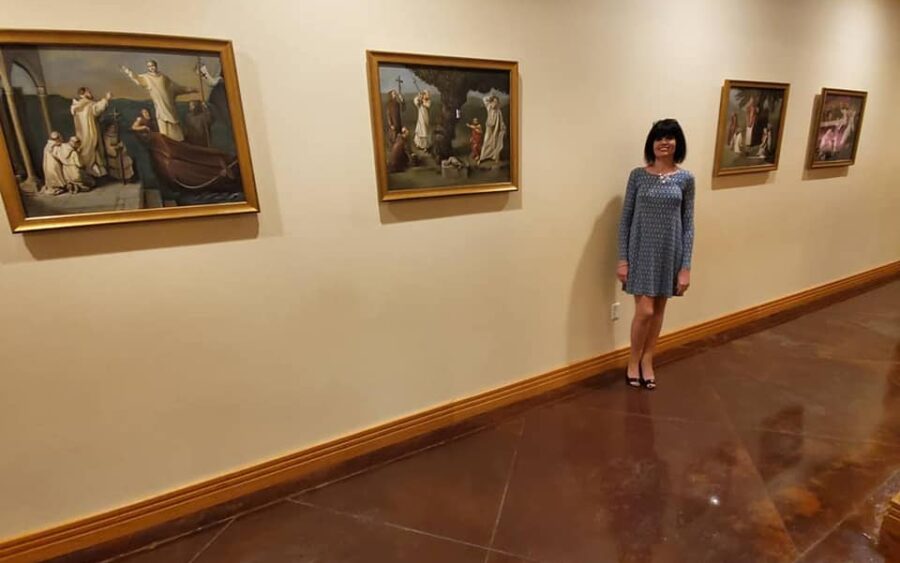 “My art is an extension of my faith, but it wasn’t always that way.” 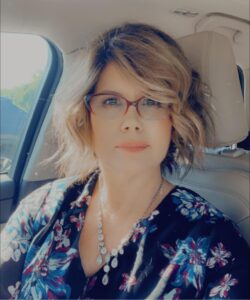 Artist Nancy Jatcko first met Regnum Christi in 1994, when her husband, Jim, accepted a position with the Atlanta Olympic Committee, two years before the city would host the Olympic Games. At the time, because there were very few Catholic schools in the area, the couple’s pastor, Father Reynolds, directed them to nearby Pinecrest Academy, a Regnum Christi school in Cumming, Georgia, which at the time was being run out of an old elementary school building and only in its second year. But it was here at Pinecrest that the Jatckos were invited to join other parents for RC Days of Reflection and Spiritual Exercises, and through encounters like these, Nancy says, the couples’ lives were changed forever. Through these experiences, their faith grew into one that was fully integrated into every aspect of their lives, and would later give them the strength they needed to endure the many challenges that they would face in their marriage and family, including job losses and changes, multiple miscarriages, a child on the autism spectrum, and a critically ill new-born.

This faith renewal also had an enormous impact on Nancy’s work as an artist. Although she had attended the Chicago Art Institute on scholarship and had been painting on and off ever since, her artistic talent was something that Nancy feels she had often taken for granted. But after she attended her first Spiritual Exercises, led by Fr. John Hopkins, LC, Nancy gradually began to connect her artistic gifts to her newly renewed Catholic faith.

However, it wasn’t until her present pastor, Fr. Jeffrey Goekner, commissioned Nancy to create a series of paintings for the parish that she finally began to realize the profoundly impactful and evangelizing potential of the union of art and faith.

In 2018, Fr. Jeffrey, pastor of St. Boniface Church in Edwardsville, Illinois, had seen a portrait that Nancy had created of St. Katharine Drexel, and had commissioned her to paint a series of four paintings of the church’s patron and namesake to celebrate the parish’s jubilee the following year. These four paintings were dedicated and blessed for veneration on the Feast of St. Boniface on June 5th. Beside the four paintings of St. Boniface, Fr. Jeff also commissioned five more individual paintings of several other saints important to the parish, including St. Clare, St. Cecilia, Pope St. John Paul II, Venerable Father Augustine Tolton, and Blessed Father Michael McGivney, all of which were dedicated and blessed for veneration by Bishop Thomas John Paprocki. 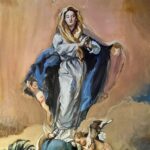 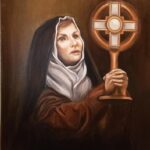 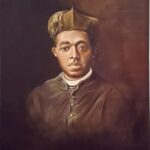 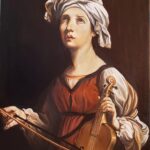 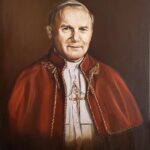 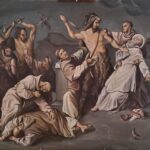 The opportunity to create these nine portraits opened up in Nancy a new relationship between her faith and her creative gifts, and as an artist, incorporating her artwork and other visual elements into her meditation has had a great influence on her prayer and spiritual life:

“When I first heard Fr. John Hopkins talk about ‘composition of place’ during prayer, visually placing yourself in the scene of the Gospel, this was a natural concept for me to grasp. My meditation on scripture has always been a form of Visio Divina in a sense – when I pray, my mind is presented with images. I’ve learned to trust those images as God’s voice over the years.” 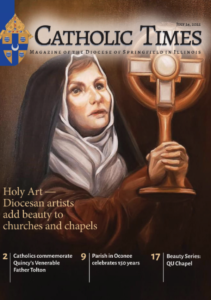 Nancy’s artwork recently appeared in the July edition of Catholic Times, a magazine published out of the diocese of Springfield, Illinois. The magazine, in a feature titled “For the Love of God & Art,” presented four local artists whose artwork in a variety of media, including painting, sculpture, and stained glass, has found a permanent home in their parishes. Three of Nancy’s portraits that now hang in her parish of St. Boniface appear in the article, including her portrait of St. Clare, which graces the cover.

Nancy is currently a Regnum Christi member at St. Boniface in Edwardsville, where, with the encouragement of her pastor, Fr. Jeff, and support from Legionary priest, Fr. Peter Krezalek, LC, she has started an Encounter with Christ group that meets in the parish center. She is also a member of the Diocesan Women’s Ministry Team and, with her husband, serves on her parish’s marriage mentoring team. She has also chaired her local Catholic high school building campaign, a role which was inspired by her Regnum Christi experience in Atlanta when she served on Pinecrest Academy Parents’ Association. “My Regnum Christi formation has allowed me to not only grow in faith, but also to pass it on to those around me in whatever way God asks, whether it’s raising funds for Catholic education, accompanying couples preparing for marriage, sharing the transformative experience of Regnum Christi with other women, or creating sacred art.”