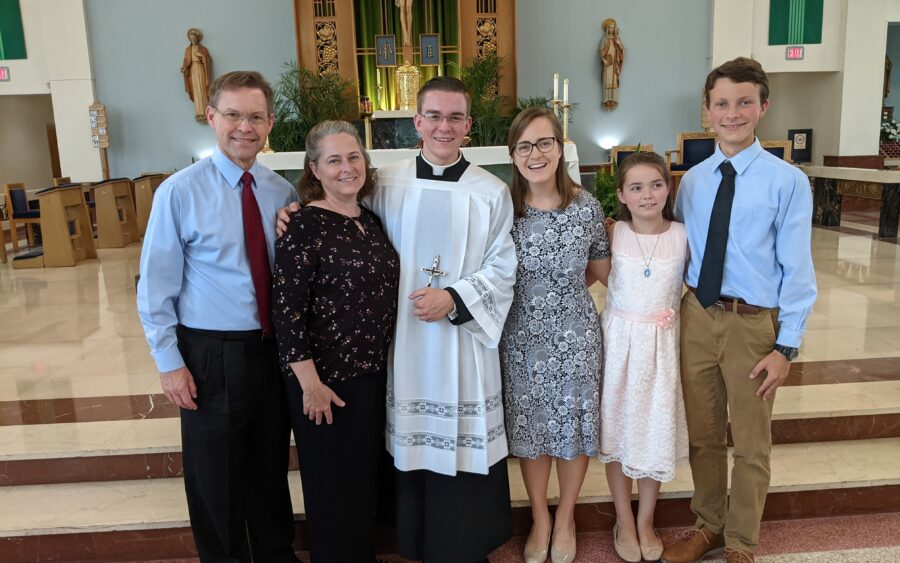 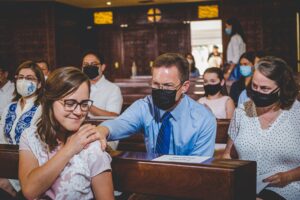 Regnum Christi first came alive for Mark and Georgette Steeves through the commitments of weekly Eucharist Adoration, frequent confession, team life, and monthly and annual retreats. These encounters with Christ and with other Regnum Christi members striving to life their Catholic faith more fully inspired the couple to want to be the husband and wife, father and mother, and witnesses of love for the Church that God was calling them to be.

When their son, Evan, was in third grade, Mark and Georgette helped to start a Conquest Club in their parish, and Mark helped with the local Conquest summer camps for several years. All three of the Steeves’ sons, Evan, Daniel, and Andrew, were Conquest participants and retreat team leaders, and took part in a variety of retreats, ski trips, and summer camps with the club. In 2008, Mark had the privilege of driving a group of boys, including his son Evan, with Father Robert DeCesare, LC, to New York for Pope Benedict’s U.S. visit. 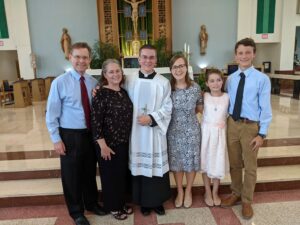 The Steeves’ daughter, Olivia became involved in the local Challenge club, and she and Georgette experienced their first Challenge summer camp in Wisconsin when Olivia was ten years old. “There, I saw Olivia blossom in a way I’d never seen before,” says Georgette, who sees that first Challenge summer camp as an integral step along Olivia’s faith and vocational journey. Olivia went on to participate in RC Mission Corps after her high school graduation, completing a year-long mission living with the Regnum Christi Consecrated Women’s community in Cincinnati, Ohio.

This year of living with the Consecrated community during her RC Mission Corps ignited in Olivia a desire to discern the vocation of consecrated life herself, but for Olivia, her journey towards discernment began many years before her mission experience with the community: 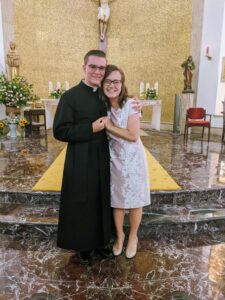 “Long before I was consecrated, I was Regnum Christi. The seeds of my vocation were planted through my involvement in the spiritual family and the gradual discovery that this charism, entrusted by the Holy Spirit to Regnum Christi, resonated from within. My vocational story begins here, because it was when my family encountered the spiritual family of RC that we began to live our faith together more deeply and I discovered a personal relationship with Christ.”

On August 21st of 2021, in Monterrey, Mexico, Olivia professed her first vows with the Consecrated Women of Regnum Christi. “Watching our daughter give herself to Christ in such a formal way was very moving,” say Mark and Georgette. “It was like a wedding!” Making the weekend even more special for the couple was having their son, Br. Daniel, join them from Connecticut. Br. Daniel assisted during the Mass, and their youngest son, Andrew, sang one of the communion songs along with the Consecrated Women. Olivia’s brother, Br. Evan, was able to attend the Mass via livestream.

But this was just the beginning for the Steeves family! Less than a month later, their son, Br. Daniel, made his first vows in Cheshire, Connecticut, with the Legionaries of Christ. “I was not prepared for the emotions I felt during Br. Daniel’s Mass,” says Mark. “Watching him during his professions filled us with happiness, pride, and love – seeing him make that courageous promise to give Christ everything and say yes to trusting his plan was so inspiring.” 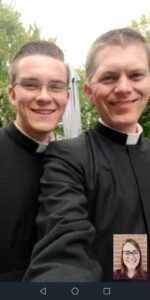 The Holy Spirit wasn’t done with the Steeves family yet – just two weeks later, on September 12th, their oldest son, Br. Evan, professed his first vows with Pro Ecclesia Sancta, an ecclesial family of consecrated life founded in Peru, where Br. Evan spent two and half years for novitiate. Traditionally, first professions for Pro Ecclesia Sancta take place in Peru, but because of COVID, the ceremony was held instead in St. Paul, Minnesota. Br. Daniel, LC, was able to assist during the Mass and profession ceremony, and even presented Br. Evan with his cassock. The youngest brother, Andrew, was an altar server. Seeing all three of their sons serving at the altar was a profound moment for Mark and Georgette. “At the end of the Mass, we had two sons in cassocks and white collars.” Br. Evan is now using what he learned in Conquest to add fun and competition to the youth group he is leading in his current parish assignment, and both Br. Evan and Br. Daniel attribute part of their discernment process to the Test Your Call Retreats in Cheshire which they both attended in their senior years of high school.

“This past August and September was the culmination of walking with all three of our oldest children through two years of novitiate for Br. Evan and Br. Daniel and two years of candidacy for Olivia,” say the Steeves, who, throughout the past year have experienced a deeper bond with their children. “Having them go through similar stages at the same time was such a gift to us, and to each other!” 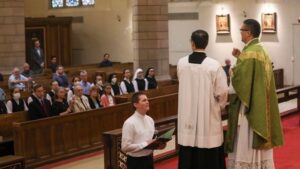 Over the past year, the couple also feels renewed in their connections within their Regnum Christi family and has grown in new relationships with the Pro Ecclesia Sancta community. They have also felt growth within themselves, in their love for each other as spouses, and in their gratitude to God for the gift of religious vocations in their family. “As our three children live their vocational lives, it amazes us how much more they express their appreciation for how we parented them and for how we live our family life. It is love reciprocated back to us as a direct gift from God.”

And their own vocation to Regnum Christi has been integral in their role as parents accompanying their children through their individual discernment processes, and, ultimately, to their first professions last summer. “Our Regnum Christi experience showed us how to love our Church, and how special it is to have our children follow Christ in a religious vocation. Regnum Christi has given us grace in supporting and encouraging our children to listen to what God asks of them. We do not lose our children when we give them back to Christ and allow him to share them with the world, because they take us with them.”

To find out more about discerning a vocation to the Legionaries of Christ, visit lccheshire.org or learn about their discernment retreats here. You can learn more about vocations to the Consecrated Men and Women of Regnum Christi by visiting their websites at consecratedwomen.org and rclayconsecratedmen.org. And read more about Olivia’s first profession of vows here.