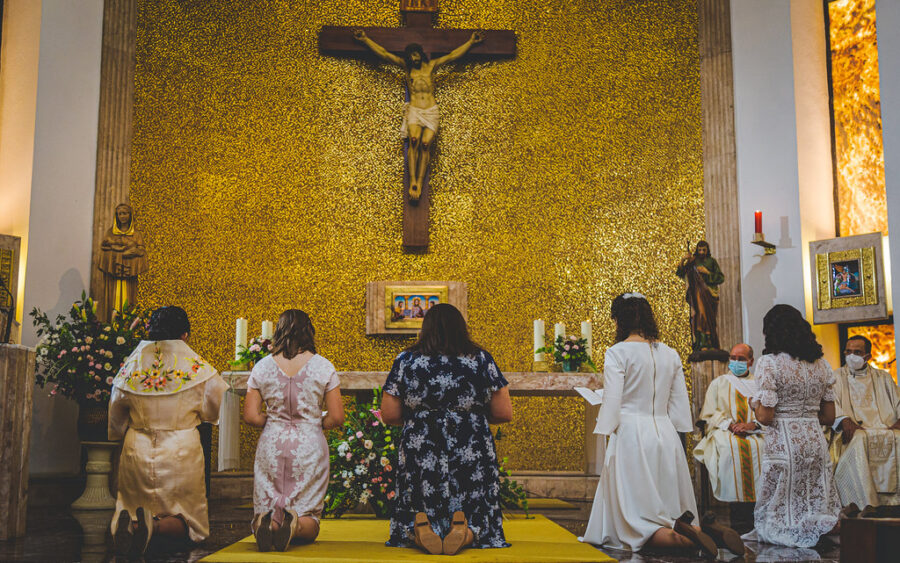 On August 21, 2021, five new Consecrated Woman of Regnum Christi made their first vows of poverty, chastity, and obedience in Monterrey, Mexico. Meet the two new consecrated women in the North American territory: Ana Sarmiento, from the Philippines, and Olivia Steeves, from the United States. 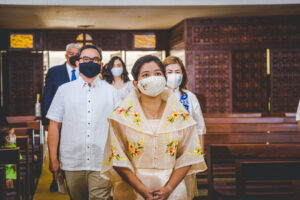 Ana Sarmiento first met the consecrated women in 2013 during a Mission Youth camp at her high school in Manila, the Philippines, and ever since then, she has worked closely with Mission Youth and the Consecrated Women, organizing and assisting at activities like camps, team leader formation, and Holy Week Missions.

It was after a Holy Week Mission in 2015 that Ana felt a strong desire to become a missionary, not just once a year at Holy Week, but for the rest of her life. “I had such a powerful experience of God’s love and mercy that it was something that I wanted everyone to know about and experience for themselves too,” says Ana. “But the ‘rational’ side of me thought I couldn’t possibly be a ‘missionary for life,’ so I contented myself with the thought of going to Holy Week missions for the rest of my life, and becoming an RC Missionary after I graduated college.”

However, in 2017, while Ana was spending time in adoration at the ECyD Missionaries summer program she was working at, she felt again God’s gentle invitation to give not just a week, or even a year, but her entire life to the mission. “I could feel all the overwhelming and endless love God had for me and all that he wanted to give to me,” says Ana. “I felt totally free.” Out of that freedom, Ana decided to start discerning the consecrated life. 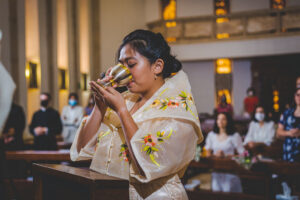 Through the accompaniment of Claire Umali, the first Filipina consecrated woman, Ana began to explore the consecrated life and, more importantly, began deepening her prayer life and her relationship with Christ, falling more in love with him each day. After graduating college, she began the candidacy program in Monterrey, Mexico. Two years later, she was making her first vows at her consecration Mass.

For Ana, the consecration Mass was an experience of pure joy. “I felt like the rest of my life was finally about to begin! Every once in awhile I would tell myself, ‘I can’t believe this is happening!’” The highlight for her was when her family and the other Filipina candidate, Mica Pabelico, started singing the communion hymn that Ana had selected for the Mass. The Filipino song “Sa’yo Lamang” (“Only Yours”) was one that Ana had grown up playing on the piano, and in that moment of the Mass, she felt like time stood still – she was 12 years old again, not knowing that those words she sung quietly to herself as a child would describe this moment, years later, when she would give her life fully to Christ. “In that instant, I felt God showing me that he had always dreamed this for me, and that everything in my past, even the simplest things, had been leading up to this very moment.”

Ana is currently living in Madrid, Spain, where she has begun three years of study in philosophy and theology at the Ecclesial University of San Damaso. She is also the auxiliary member to the girls’ ECyD in Highlands School Los Fresnos, a private Catholic and bilingual school, which is part of the Regnum Christi international educational network, in Madrid.

“We started as friends” 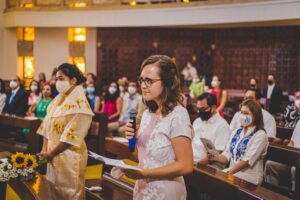 It was through ECyD retreats, summer camps, and conventions that Olivia Steeves formed a personal friendship with Christ; the first thing God was for her was a friend. “My consecration is a spousal relationship with Christ, and this relationship began with a friendship,” says Olivia. “As married couples will sometimes say, with a smile, we started as friends.”

And it was through these same retreats and camps that Olivia first met the Consecrated Women. After graduating from high school, Olivia had the privilege to give a year as an RC Missionary in Cincinnati, Ohio, where she was immersed in a life of mission and, significantly, in the daily life of the Consecrated Women. During that year, she had the joy to live elbow-to-elbow with a community of eight Consecrated Women and two other missionaries – in prayer, in apostolate, in meals, and in all the ordinary but crucial moments in between.

Olivia went on to pursue a degree in English and Catholic Studies from the University of St. Thomas, in St. Paul, Minnesota, but halfway through her college career during her sophomore year, certain questions began arising in her heart with insistency: With whom am I called to share my life? To whom will I give my heart? Olivia found herself attracted by the beauty of both marriage and the consecrated life – she had dated and knew the joy of falling in love, and she had lived alongside the Consecrated Women, and seen the joy of their life. She entered into a season of great uncertainty, but one in which she also experienced great freedom. “I was waiting for the Holy Spirit to draw me in a particular direction. And, eventually, He did.” 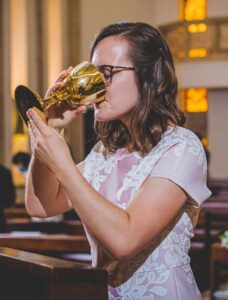 The slow and gradual pull to the consecrated life culminated for Olivia in a clear, powerful invitation during a vocational retreat for general discernment that she attended in January of 2017 with the religious sisters of Pro Ecclesia Sancta – the weekend provided the space and opportunity that Christ had been waiting for. Says Olivia, “One clarity I had always carried with me was my charism of Regnum Christi, and now Jesus drew me deep into the roots of my identity to reveal another certainty: a call to belong exclusively to him, and, perhaps even more than a call, a revelation of who I was created to be.”

In the following two years, Olivia completed her college degree and was accompanied by Adrienne Rowles, the vocational director of the Consecrated Women in North America. After graduating in December of 2018, she lived for a semester with the community of Consecrated Women in Atlanta, Georgia, in the in-house discernment program for young women considering consecrated life in Regnum Christi. Here, she realized that her vocational journey had been a constant, gradual development of her friendship with Christ.

Olivia arrived in Monterrey, Mexico in June of 2019 to begin her candidacy. These two years, filled with a rich prayer life and deep spiritual growth confirmed her vocation, and this past summer, she made her first temporary vows. “I will never forget standing there at the altar, eye level with the tabernacle, and responding to each of the questions put to me: I do.” Olivia describes this moment as feeling simultaneously lifted up by all the family, friends, and sisters witnessing the consecration, and yet being utterly alone with Christ. One of those family members present to witness – and serve as acolyte at – the consecration Mass was Olivia’s younger brother, Brother Daniel Steeves, who also just professed his temporary vows with the Legionaries of Christ. He and Olivia’s other younger brother, Andrew, sang the final communion song, “Cup of Life Outpoured.”

Olivia is now living in Madrid, Spain, where she is studying philosophy and theology at the Ecclesial University of San Damaso. In the short time since her consecration, she has begun to discover more and more that her call to consecrated life is a work of God that he continues to unfold in her heart each day. “This vocation is an adventure, a daily school of love, and above all, a Person whose heart is my home.”

Alongside Ana and Olivia, Silvia Marchiori of Italy, and Jenny Diaz and Cecilia Torres Arpi of Mexico, made their first vows in August in Monterrey. To find out more about the Consecrated Women of Regnum Christi, or to learn more about the discernment process, visit their website at consecratedwomen.org. 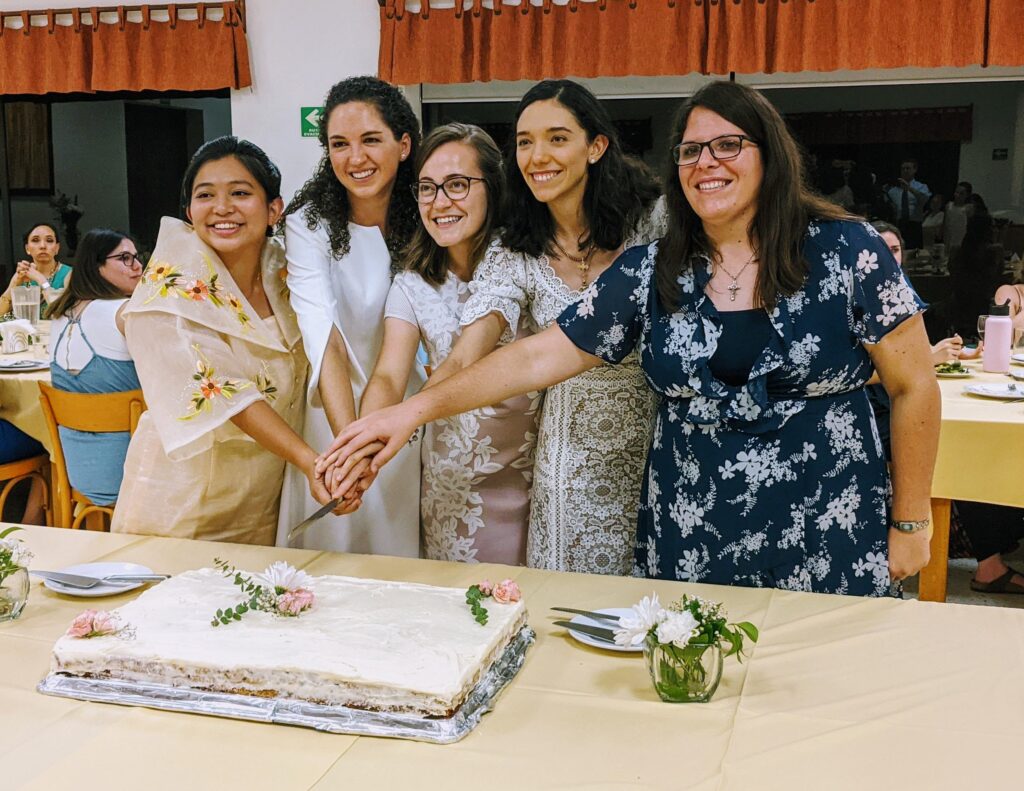 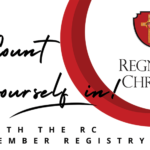 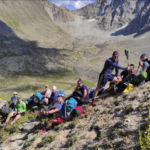 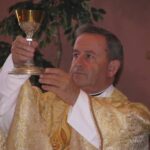