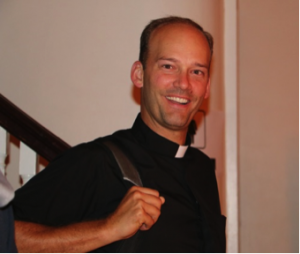 80% of the delegates to the Renewal of Regnum Christi are lay RC members elected by their peers. The other 20% are Legionaries and Consecrated members who have been appointed to attend the Renewal Convention by their Territorial Directors. We would like to introduce them to you as well.

I grew up in an active Catholic family where we all exhibited the saint and sinner traits of a normal family… and probably more of the latter. During high school, the call to the priesthood I had felt as a small boy persisted and grew, and when I first heard about this new missionary order with such a militaristic name, solid spirituality rooted in Christ and his Church, challenging formation, and a dynamic evangelizing mission… I was intrigued. Through a Regnum Christi member in Omaha, NE, I made personal contact with a Legionary priest and came to visit the novitiate in Cheshire, CT. That visit was crucial for me. I met men who loved Jesus Christ, who were normal, who wanted to do great things for the Church, who lived authentic charity… even on the basketball court. I joined the Legionaries of Christ when I was 17 years old, in the summer of 1993.

My two years of novitiate were in Cheshire, then Armonk, NY. After professing my temporal vows in September of 1995, I studied 2 years of classical humanities in Cheshire and Thornwood, then headed to Rome for philosophy studies. From 1999-2002 I did my apostolic internship in Denver, CO as director of a vocation team. When I returned to Rome to continue my studies (license in philosophy, then bachelor’s and license in theology) I collaborated in various roles in our General Directorate. I was ordained a priest in December of 2007.

Since the summer of 2008, I returned to the United States and served as “assistant for apostolate” to the territorial directors of the New York territory and then the combined territory of North America. In the summer of 2012, I received a new assignment as regional director of Regnum Christi and director of Regnum Christi youth work in the Ohio Valley. I’ve published two books and I’m working on another one entitled “Journey to Joy: Spiritual Reflections on the Seven Sorrows of the Blessed Virgin Mary.”

I enjoy the service of organizing Legionaries and Regnum Christi members, but even more so I love being a priest of Jesus Christ, able to bring to bear His mercy through confession and His presence through the Eucharist.

Before the trials of the past years, I loved the Movement. After these years of trial, I love her even more and marvel at the holiness and fruitfulness that I witness in the daily lives of our members.