Wednesday of the Thirty-third Week in Ordinary Time

While they were listening to Jesus speak, he proceeded to tell a parable because he was near Jerusalem and they thought that the kingdom of God would appear there immediately. So he said, “A nobleman went off to a distant country to obtain the kingship for himself and then to return. He called ten of his servants and gave them ten gold coins and told them, ‘Engage in trade with these until I return.’ His fellow citizens, however, despised him and sent a delegation after him to announce, ‘We do not want this man to be our king.’ But when he returned after obtaining the kingship, he had the servants called, to whom he had given the money, to learn what they had gained by trading. The first came forward and said, ‘Sir, your gold coin has earned ten additional ones.’ He replied, ‘Well done, good servant! You have been faithful in this very small matter; take charge of ten cities.’ Then the second came and reported, ‘Your gold coin, sir, has earned five more.’ And to this servant too he said, ‘You, take charge of five cities.’ Then the other servant came and said, ‘Sir, here is your gold coin; I kept it stored away in a handkerchief, for I was afraid of you, because you are a demanding person; you take up what you did not lay down and you harvest what you did not plant.’ He said to him, ‘With your own words I shall condemn you, you wicked servant. You knew I was a demanding person, taking up what I did not lay down and harvesting what I did not plant; why did you not put my money in a bank? Then on my return I would have collected it with interest.’ And to those standing by he said, ‘Take the gold coin from him and give it to the servant who has ten.’ But they said to him, ‘Sir, he has ten gold coins.’ ‘I tell you, to everyone who has, more will be given, but from the one who has not, even what he has will be taken away. Now as for those enemies of mine who did not want me as their king, bring them here and slay them before me.'” After he had said this, he proceeded on his journey up to Jerusalem.

Introductory Prayer: Lord Jesus, you are the Alpha and the Omega. You have  given me life and offer me eternal life with you. You deserve my honor, gratitude and love, and yet you never impose yourself upon me. Thank you for respecting my freedom so that I can offer myself to you. All that I have is yours; I return it to you.

Petition: Lord Jesus, teach me to be patient and persevering in using my talents to serve you and my neighbor.

1. Jesus, the King of Kings: Nowadays there is renewed interest in the imminence of the Lord’s return in glory. Every Sunday when we recite the Creed we attest to our faith that Christ “will come again to judge the living and the dead.” But we also know that we do not know when it will be, as Our Lord clearly states: “But about that day and hour no one knows” (Matthew 24:36). So what should we do in the meantime? The answer is very simple: Live faithful to the values of Christ’s Kingdom and show that he is our King right now. Are there any areas in my life where Christ is not ruler? Am I faithful to my Christian commitments? Do I use my time well?

2. Earning One Gold Coin at a Time: In today’s parable each servant receives only one gold coin, but some invest it better than others. There are some gifts that God has given all of us in equal measure and some that we each receive in varying degrees. At baptism we receive the gifts of faith, hope and love in seed form, so to speak, and it is up to us to make sure they are cultivated, irrigated and exposed to enough light so that they will grow and bear fruit. These gifts of faith, hope and love are not given to us just for rainy days or moments of trial, but rather to keep us focused on who we are as children of God and heirs to the kingdom of heaven. Exercising these virtues is like earning gold, one coin at a time. How often have I thanked God for his gifts of faith, hope and love? Do I strive to grow in these virtues by keeping my heart set on the things of heaven and through charity towards my neighbor?

3. God’s Generosity: St. John reminds us that “God is love” (1 John 4:8). God’s essence is self-giving. The man who hid his coin could not discover or fathom this reality, but the man who “spent” his gold coin found this out as he was able to earn many more. Jesus tells us that “unless a grain of wheat falls into the earth and dies, it remains just a single grain” (John 12:24). Later however a metamorphosis occurs which brings many new grains of wheat into being. Jesus’ death on the cross is the perfect example of the transformation of sacrifice and self-giving into fruitfulness. We can’t have Jesus as our king unless we are willing to follow him on his journey to Jerusalem and impending death. We have much to give up, but we have so much more to gain by using our talents for the Kingdom.

Conversation with Christ: Lord Jesus, I am sometimes afraid of what it means to die to myself. Help me to use all of my talents for your kingdom. Help me to realize that I have nothing to lose and everything to gain and to take steps courageously to love you.

Resolution: As a way of showing my love for Jesus, today I will practice patience with someone who annoys me. 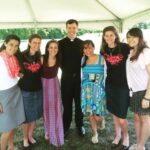 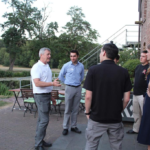 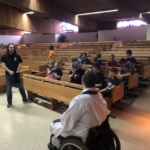 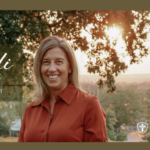 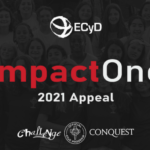