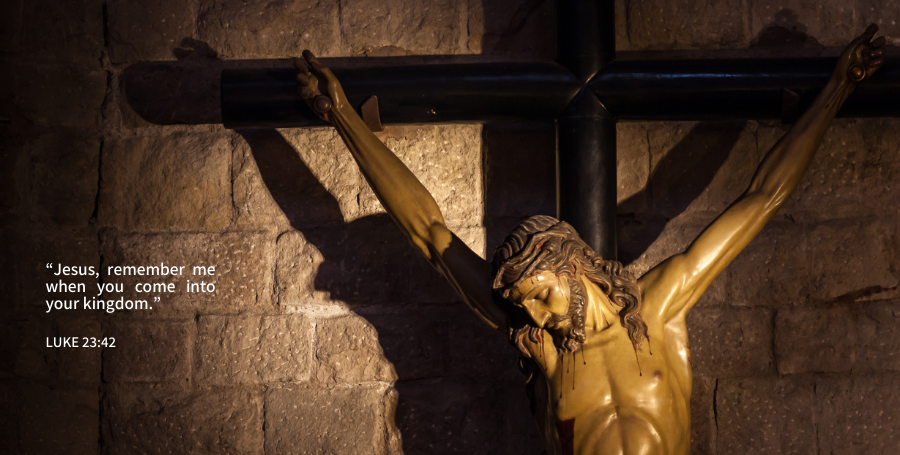 Our Lord Jesus Christ, King of the Universe

The rulers sneered at Jesus and said, “He saved others, let him save himself if he is the chosen one, the Christ of God.” Even the soldiers jeered at him. As they approached to offer him wine they called out, “If you are King of the Jews, save yourself.” Above him there was an inscription that read, “This is the King of the Jews.” Now one of the criminals hanging there reviled Jesus, saying, “Are you not the Christ? Save yourself and us.” The other, however, rebuking him, said in reply, “Have you no fear of God, for you are subject to the same condemnation? And indeed, we have been condemned justly, for the sentence we received corresponds to our crimes, but this man has done nothing criminal.” Then he said, “Jesus, remember me when you come into your kingdom.” He replied to him, “Amen, I say to you, today you will be with me in Paradise.”

Introductory Prayer: Lord, thank you for this moment in which I can be alone with you. I believe that you are truth itself, that you are the foundation of all moral judgments. I trust that you really care for me and give me the light to see the needs of others. I love you, Lord, and show it now with my desire to pray.

Petition: Lord, help me to be always faithful to Christ my King in the smallest duties of my state in life.

Conversation with Christ: Jesus, I don’t want to be just part of the crowd who remained silent. Give me the strength to stand up for you and to defend you. Help me never to deny you in my life. Help me to be faithful to your teachings and your will.

Resolution: I will speak of Christ today in my conversations with others.