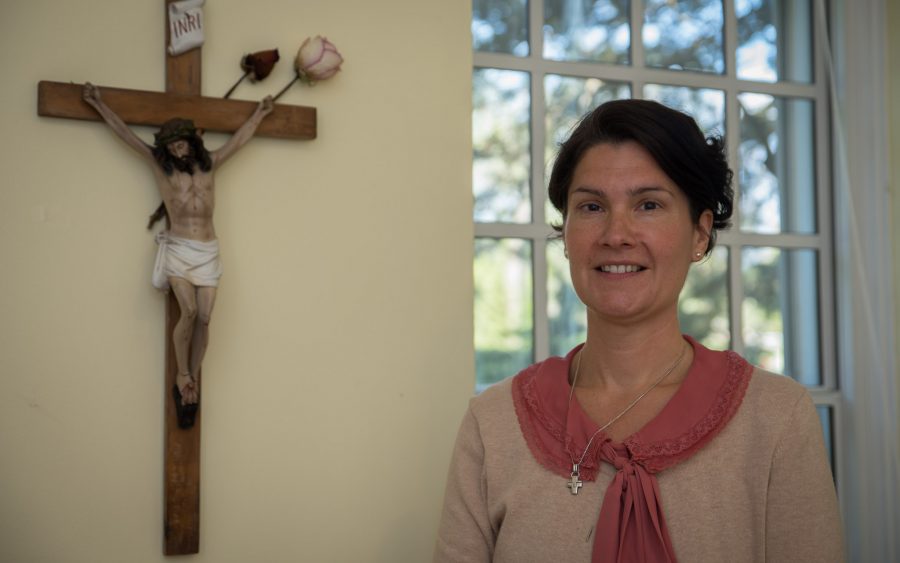 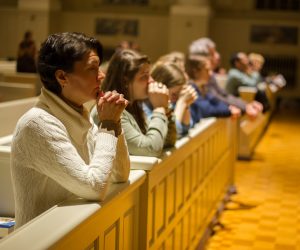 Odds of a young German Consecrated Woman of Regnum Christi becoming a member of the formation team at a seminary in Chicago? One in a very big number.

But that is the fate of Patricia Klein, who consecrated her life to Christ in Regnum Christi 21 years ago and stuck out on a path that no one had taken before.

Her path started in Germany and ended in Chicago (for now, at least), but we will pick up the train in Quebec, where Patricia was a college student.

Her brother had decided to enter the Legion of Christ in 1994 (he now is a Legionary priest working in Europe) and she went to visit.

“I was really impressed by his joy and happiness,” Patricia said. “I got interested in doing mission work with Regnum Christi.”

Back at school in Quebec, she got a call from a couple Consecrated Woman of Regnum Christi a few weeks later (thanks to her brother’s intervention). They had coffee and they invited her to give a year of service to Regnum Christi.

Patricia admits that she was interested…but not ready for such a commitment. She wanted to continue with college, studying political science and French, on the way, perhaps, to a career in international relations.

But she decided to attend the Regnum Christi International Formators Course in Rome that summer and during an evening hour of adoration, felt the call to give two years of missionary service to the Movement.

It was complicated, of course, because she hadn’t finished college (which her parents were funding) and she wasn’t sure they would approve (which they did, if she felt it was God’s will).

Before leaving for her mission year (in Paris), she attended the consecrated discernment course. There she got a strong affirmation that she was called to consecrated life, but wasn’t ready to make the commitment.

“Looking back, I see that I needed that year of missionary service to continue to discern and mature,” Patricia said.

As the year passed, her vocational decision alternated from “yes” to “no.” And on Holy Thursday of 1996, she was in the Chapel at the center of the consecrated in Rome, and found herself suddenly at peace with “yes.”

It is all about learning how to love and she was ready to find out in which vocation, married or consecrated life, she was called to love the best and more.

She went to the candidacy and was consecrated.

Her formation included three years in Spain and a year in Rhode Island. Then following a series of apostolic assignments in Hungary, Mexico and France.

Being consecrated was difficult – for the first 10 years.

“Fortunately, I had many people who accompanied me and supported me. And I eventually reached a point of self-acceptance. The hard times helped me to see that I didn’t have to be perfect.” After 12 years of various foreign postings, she returned to Germany: “That was awesome.”

Her new assignment was to manage relationships with dioceses and parishes, which she found appealing. And that meant attending a multitude of church events.

“I went to everything,” Patricia said. “To others in the Church, it was like I was the face of Regnum Christi.”

Patricia loved what she was doing, but this was late 2008 into early 2009. As the scandal of the Legion’s founder unfolded, her work became challenging. But she plugged ahead, meeting people, helping others, participating in diocesan missions. In a way, she helped to pioneer the Movement’s more open communion with the local Church – at a time of great difficulty.

Patricia felt energized in her work with the dioceses and parishes. Fortunately, she worked with directors who accepted what could have seemed like a rather non-Movement focus. Those directors were Gloria Rodriguez, now general director for the Consecrated Women; and Fr Sylvester Heereman, LC now serving on the Legion’s General Council.

By 2011, Patricia became convinced that Regnum Christi’s charism could be of significant service to dioceses – perhaps even in seminary formation. It seemed a little crazy at the time, but the idea wouldn’t go away.

The idea got so strong that she told Jesus in prayer to “either do something about this or take the desire away…it is too painful as it is.”

Then, a chain of events started that a non-believer would certainly say were nothing more than coincidence, but a devout Catholic like Patricia would interpret as the work of the Holy Spirit.

First, she attended an event of the city mission in Dusseldorf. It had been a long week, she was tired, she didn’t want to go…but something told her to do it. At the event, a man approached her and asked if she was a Consecrated Woman of Regnum Christi. He turned out to be a seminary formator from Madrid, where he has met consecrated members.

They had a follow-up meeting so that she could get his take on her “crazy idea” of working with seminarians. He suggested she start with the seminary in Cologne and see if they might be interested in her doing some conferences. No problem: Patricia knew the vice-rector of the seminary from her diocesan work. Of course, he was looking for someone to talk to the seminarians about “women and liturgy” and offered her the opportunity to be a guest speaker.

This addressed her desire to serve seminarians, but it wasn’t fully satisfying…she felt she was called to do more, but had no idea how.

In early 2012, she went on a pilgrimage to the Holy Land with her parents and Legionary Priest brother. They stayed at the Notre Dame Center in Jerusalem, managed by the Legion. A group of American seminarians also were there, but Patricia took little note of them; there was no way she would ever go to the US.

One afternoon, she was casually browsing the Center bookstore, waiting for her parents. A “very outgoing” priest said hello and introduced himself. Patricia had no idea who he was or what it might matter to her, but she ran into him again in the Center dining room that night.  He was sitting with someone she knew, who called her over for an introduction.

The outgoing priest was Nigerian Father Peter Damian Akpunonu, then a professor of biblical exegesis at the University of St. Mary of the Lake/Mundelein Seminary in Chicago.

Patricia figured he might have some advice for her seminarian idea, so they had a conversation. It seemed the seminary needed someone to do the sort of things Patricia wanted to do and the conversation turned into a job interview. He liked what he heard and asked her to apply for the job.

She went home, not knowing if this job possibility really was a possibility. It was a time of great disruption for Regnum Christ and even in the calmest of times, such a move from one country to another involving dioceses, a religious congregation and a seminary would involve many approvals and miles of red tape.

A coincidence here and another there and Patricia soon found herself on a plane to Chicago, more interviews and meeting the seminary’s incoming rector, Fr (now bishop) Robert Barron and the late Cardinal Francis George.

Today, Patricia is five years into her seminary experience, which she says can be challenging, for example helping the men experience that social justice and pro-life advocacy are complementary not competing with academics. ‘It is all about personal balance and not losing the reason why we study what we study.” 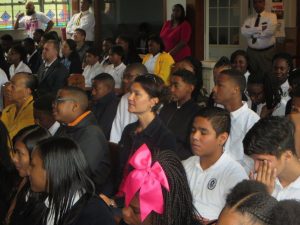 Highlights include trips to the National March for Life in Washington DC, with a small army of seminarians. And she took a group to Birmingham, Alabama, to learn about the Catholic African-American community and the events of the Civil Rights Movement.

Her official title: Associate Dean of Formation, Associate Director of the Teaching Parish Program, Coordinator, March for Life. She spends the majority of her time on the Teaching Parish Program, which places upper class seminarians in area parishes for part of each week, giving the men real-life experience ahead of ordination. It is a new program. Together with a religious sister, she splits the 82 parishes and accompanies and visits 41 parishes and their respective seminarians.

That is a lot of travel, compounded on her daily commute of an hour each way. The seminary is, after all, in Mundelein, far northwest of Chicago, and even farther from her home with the Chicago Consecrated community in Northlake, Illinois. But being in community is important for any consecrated, including someone like Patricia, who is a bit of a specialist.

Mundelein is a big seminary by today’s standards: currently 206 seminarians from 37 dioceses. Patricia often feels the frustration of not being able to be available to everyone. “However, the men know that I love them and that I pray for them.”

And the spiritual reward outshines any frustrations:

“My great happiness comes when I see men have their hearts little by little transformed to a shepherd’s heart, where they deeply care and desire the good of others, putting their own interests or ideas aside. This little confirmation of the heart is the deepest joy.”