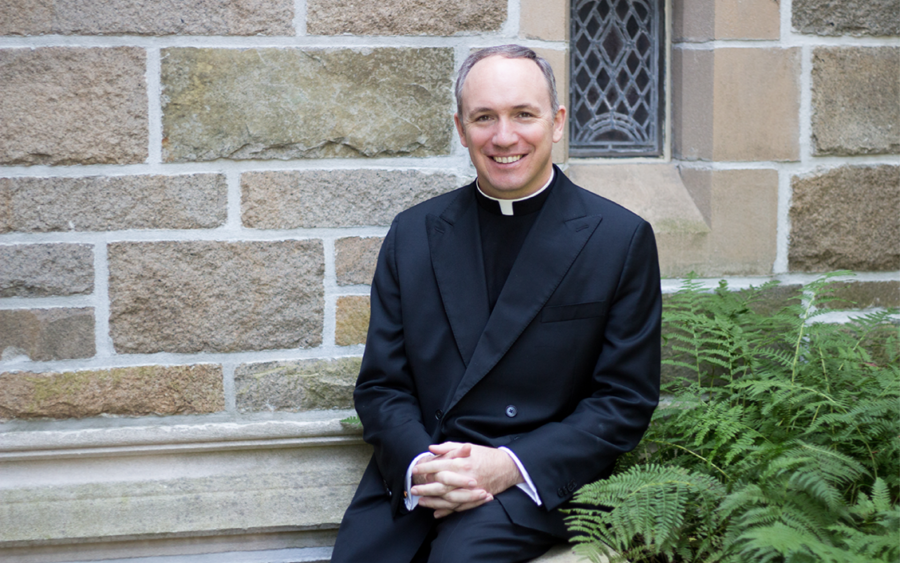 Father Jason Smith, LC, stands on the sidewalk in the middle of bustling Manhattan, and rings the buzzer to enter the building. He’s the parochial vicar at the Basilica of St. Patrick’s Old Cathedral in New York City, and he’s come to bring communion to one of the parish’s eldest members. “Father, I’m gonna open the window and throw down a key!” Father Jason hears, and from an open window several floors up, a key comes flying out, perfectly tossed, right into his hands on the busy street below.

Certainly, when Father Jason was a young boy growing up in the quiet community of Forest Lakes, Minnesota, he never would have imagined his life looking the way it does today: working as a parish priest in a busy basilica in the middle of a hectic and humming metropolis. Yet since his ordination at St. Mary Major in Rome in December of 2006, Father Jason has spent his entire priesthood in New York. 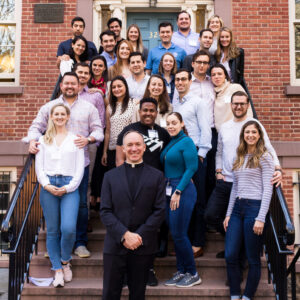 The first six years of Father Jason’s priesthood were dedicated to youth work in the New York Tri-State area, running Regnum Christi Mission Corps, directing high school ministries, and offering spiritual direction during summer discernment programs. It was during this period that he struck up a friendship with Monsignor Donald Sakano, the pastor at St. Patrick’s Old Cathedral at the time, and began working with him on a variety of apostolic initiatives like missions, marriage preparation, retreats for young adults, and even an art exhibit for the Year of Mercy. When Monsignor Sakano retired in June of 2019, it only made sense for Father Jason to continue the work he had begun at St. Patrick’s, this time as the parochial vicar.

As the parochial vicar of a dynamic and historically significant parish in the heart of New York City, Father normally keeps busy celebrating the sacraments and collaborating with the basilica administrator, Father Brian Graebe, on various apostolic projects, particularly the marriage preparation program and its follow-up program, Cana Uncorked, a Regnum Christi apostolate for engaged and married couples. But for Father Jason, being a parish priest isn’t that dissimilar from the other roles he’s held since joining the Legion of Christ. “It is really not that different from what I was doing before: celebrate the Sacraments, form Catholic leaders, and serve the needs of the Church,” says Father Jason. “If anything, it has helped me to focus my time and energy better by channeling my creativity to a specific place, and creating a mindset of being a missionary priest in Manhattan.”

And one of Father Jason’s favorite parts of that mission is bringing Holy Communion to the elderly parishioners of the basilica. “Above the trendy fashion stores, the award-winning restaurants, the art studios, and the boutique gyms of SoHo, in tiny apartments that are like true time capsules, are a hidden number of elderly who have lived in this neighborhood since the early forties,” says Father Jason. Here, in entering the homes of his parishioners, he steps back into another era, and encounters the lively faith of the basilica’ eldest members. 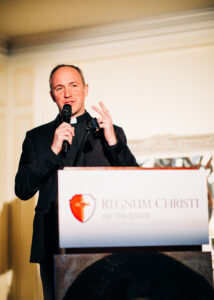 In one apartment, Father Jason greets Rocco, a ninety-nine-year-old WWII veteran who has been faithfully married to his wife, Sue, for over seventy-five years. On their wall hang their First Communion certificates from their childhood, their wedding photo, and a papal blessing from Saint John II for their fiftieth wedding anniversary.

In another apartment, Father Jason asks the elderly parishioner, confined to her wheelchair and on dialysis, how he can pray for her. “Oh, I’m perfectly fine,” she replies, “Let’s pray for all those young people out there. They are always out so late; I just worry about them.”

As Father Jason goes to leave another elderly parishioner after bringing her Holy Communion, she grabs both of his hands. “Here,” she says, as she slips him a five-dollar bill, “this is from the heart, because you brought me the greatest gift ever: Jesus.”

These encounters with his parishioners are the moments that Father Jason cherishes most about his role as parish priest at St. Patrick’s Old Cathedral. However, his pastoral ministry has drastically changed in the past few months, as New York City became the epicenter of the COVID-19 pandemic in the United States, and all public masses in the Archdiocese of New York were indefinitely suspended. The previously vibrant neighborhood of Nolita where St. Patrick’s is situated, which is known for its charming boutiques and sidewalk cafés, has completely shut down. Once thriving businesses are closed. The streets, usually full of pedestrians and sidewalk vendors, are empty. “It’s right out of an apocalyptic movie,” says Father Jason. “Most people have left. The restaurants, stores, art galleries, and gyms are all boarded up. There are very few people walking the street. There is a rise in crime.” 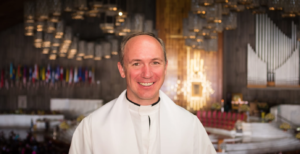 Indeed, the Legionary community in New York City felt the impact of the pandemic firsthand when five Legionaries within the community were infected with COVID-19. Fortunately, all five have recovered, but all priests who had had contact with them, including Father Jason, had to be quarantined at the LC community home for over a month and a half.

“It has been very hard,” says Father Jason, of the pandemic’s impact on the parish of St. Patrick’s Old Cathedral, and on the community as a whole. “Our vibrant neighborhood is empty and shut down. Most of our younger parishioners have left the city. Our older ones are staying sheltered in place.” One of his biggest concerns in the upcoming months is getting people back into the basilica, once public Masses are finally allowed to resume. “Our congregation is made up predominantly of young adults; most have left,” says Father Jason. “My hope is they will return to the city and, of course, return to Mass.”

Certainly, for Father Jason, the pandemic has been a school of faith, trust, and above all, patience. “We are now waiting for things to begin to slowly open up, but with Manhattan being the epicenter, it is hard to make projections about what we will do,” he says, as he patiently awaits the reopening of the city and, ultimately, resumption of public Masses at the basilica. “I imagine all of these realities will shape our pastoral response.”

Despite the difficulties and, in particular, the uncertainty of living and ministering in the epicenter of a pandemic, Father Jason remains, above all, hopeful. “I have no idea what awaits. There is so much that is unknown,” he says. “What I do know is that New Yorkers are resilient. We will bounce back. But it is going to take a lot of prayer and hard work.”

You can find Father Jason on Instagram at @frjasonsmith, where he live-streams daily Mass and the rosary with other members of the Legionary community in New York City.