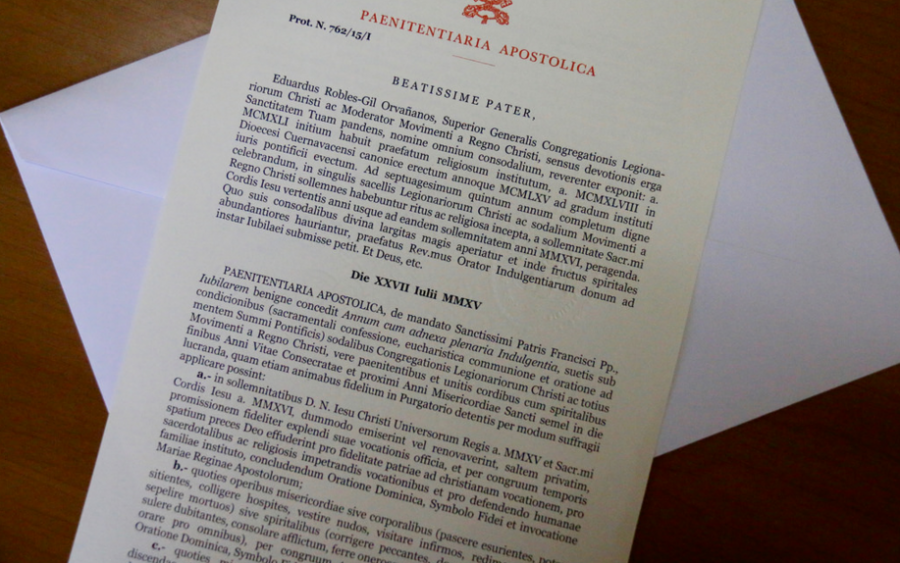 Pope Francis granted the indulgence with a decree from the Apostolic Penitentiary on the occasion of the 75th anniversary of the foundation of the Congregation.

Rome. October 28, 2015. Pope Francis has granted a plenary indulgence in the form of a jubilee year to the Legionaries of Christ and the members of Regnum Christi during the year in which they commemorate 75 years since their foundation. This jubilee will conclude with the solemnity of the Sacred Heart in 2016.

The Apostolic Penitentiary published a decree signed by the Major Penitentiary, Cardinal Mauro Piacenza, as a response to the request from the General Director of Regnum Christi and the Legion of Christ, Father Eduardo Robles-Gil, L.C.

The Legionaries and members of Regnum Christi may receive the jubilee indulgence during the solemnity of Christ the King in 2015 and the solemnity of the Sacred Heart in 2016 if they profess or devotionally renew the promises or vows which bind them to the Movement or the Legion, pray that the Lord keep their country faithful to its Christian vocation, as well as pray an Our Father, the Creed and an invocation to Our Lady, Queen of Apostles.

Likewise, the plenary indulgence will be granted if they dedicate a sufficient amount of time to the corporal or spiritual works of mercy, concluding with an Our Father, the Creed, and an invocation to Our Lady, Queen of the Apostles.

The indulgence will also be granted if the members dedicate time to learning or teaching Christian doctrine, or if they participate in evangelization missions.

Legionaries and Regnum Christi members who are impeded by age or illness can receive the indulgence by uniting themselves spiritually to the jubilee celebrations and offering their prayers and sufferings for the new Evangelization and the establishment of the Kingdom of Christ.

In a letter to Legionaries and Regnum Christi members, Fr. Robles-Gil wrote: “I encourage you to make the most of this grace that the Holy Father has granted us to renew our gratitude to the Lord for the gift of the Movement and to increase our desire to be apostles and credible witnesses of the Kingdom of Jesus Christ.”