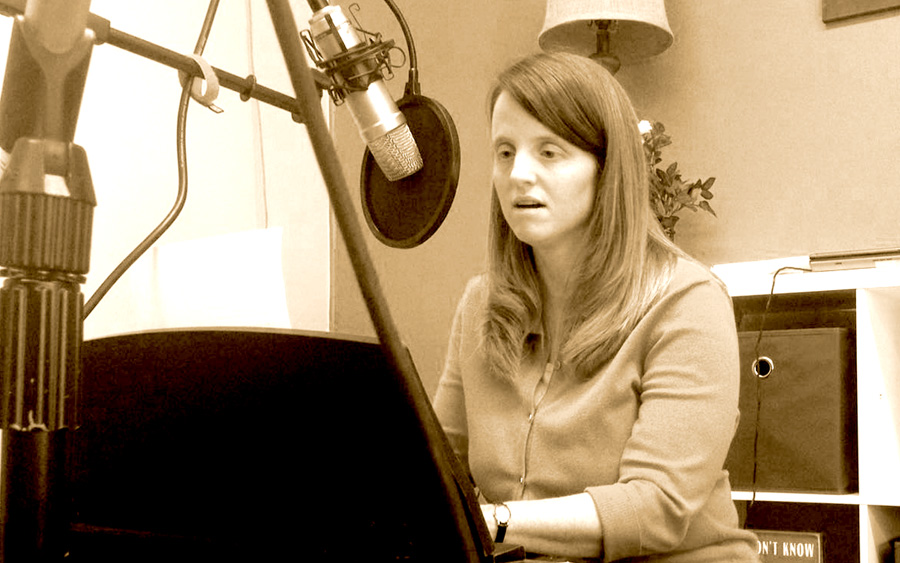 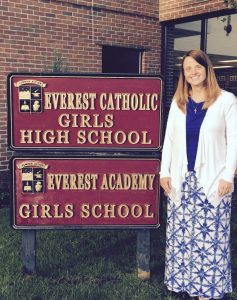 Jill lives in the consecrated community in Oxford, Michigan. She is Formation Director for the girls’ school at Everest Academy in Clarkston.

Jill Swallow’s love of singing began as her mom carried her in her womb.

“Mom was always singing, Jill said.  “She sang along in the car, adding harmony to whoever was singing on the radio.  At home, she sang all the time:  doing the dishes, folding laundry. And she always invited us to sing along..”

It wasn’t surprising that Jill got into music from an early age in her hometown of Versailles, Ohio.  She sang in the choir all through school, studied piano and performed in musicals from early childhood.  In high school, she continued to sing, played trumpet in the concert band and was the on-field director of the marching band.

Then it was off to Miami University in Oxford, Ohio, to get her degree in teaching, meet the right guy and settle down to raise a family.  But God had other plans.

In May of her sophomore year, Jill attended a retreat called Youth 2000 where she heard God’s call to total consecration and missionary work.  In June, her best friend introduced her to two Consecrated Women of Regnum Christi who invited her to a discernment program in Rhode Island.  Jill went to Rhode Island in July and discovered that God was indeed calling her to this lifestyle.  She made her first vows of poverty, chastity, and obedience on August 25, 2001.

“God put me on a fast train,” she said, “but the vocation is something He’s had in mind from all eternity.”

Jill was willing to accept the possibility that consecrated life would put a halt to her musical life.  But again, God had other plans.

It turned out that consecrated life included singing – lots of singing: Mass, choir, special events, just for fun.  And the women even produced CDs.  Jill said instead of abandoning her music, she has been able to do more with it than she ever expected.

“Arise” is Jill’s latest release.  As the name implies, it is an uplifting song of joy and trust, a sequel to her earlier song, “Holding On,” written during a period of pain and suffering.  Jill has performed on a half dozen CDs produced by the Consecrated Women off Regnum Christi, on not only her own songs, but accompanying others, directing and producing.

“But I want to make it clear that I’m not a songwriter,” Jill said.  “I don’t sit down at the piano and tell myself I’m going to write a song; that doesn’t work for me and would be forced.

“Instead, songs come to me as gifts in prayer.  One came as I was walking through an airport on the way home from a retreat.  Another came as I held a dying baby during a mission trip to Haiti.”

Today, Jill lives in the community of consecrated women in Oxford, Michigan.  She is Formation Director for the girls’ school at Everest Academy in Clarkston.  And she has nearly a dozen more gifts in the form of songs awaiting release. 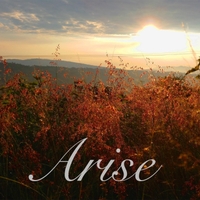 Arise and other cds by Jill and the Consecrated Women of Regnum Christi are available at cdbaby.