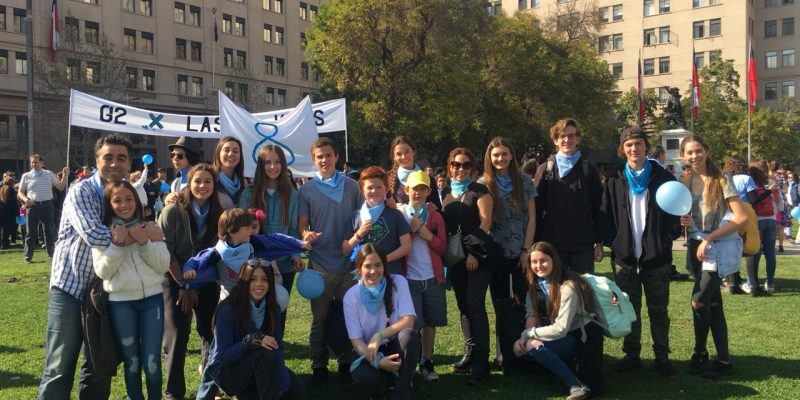 Recently Chile was considering legalizing abortion in many cases. Regnum Christi members participated in pro-life events around the debate. In the end, Chile kept abortion illegal in almost all cases.

A group of Regnum Christi families and young people participated in the Pañuelazo Por las Dos Vidas [blue handkerchief for both lives] which took place on September 8 in front of La Moneda [the Chilean White House]. The demonstration in support of mother and child was in response to a bill that would have decriminalized the interruption of pregnancy until 14 weeks of gestation [i.e. legal abortion up to 14 weeks].

The demonstration, which brought together about three thousand people with their sky-blue handkerchiefs, was convened by the Collective for the Two Lives, made up of or supported by 27 organizations including Testimonies for Life, the Women’s Movement for Reclaim, and Forever for Life. In the Argentine debate, those supporting the pro-life position repeatedly spoke of the two lives to show that abortion is bad for both mother and child.

Two RC members, Paula Concha and Rebeca Garcés, gave us their testimony of what they experienced during the march.

Paula Concha explained, “Being in favor of life motivated us to go and be brave as Christians, to raise our voices. I believe that today it is not so popular to be in favor of life in terms of protecting women and those who are about to be born: this handkerchief was for both lives. Also, in giving testimony, we feel that we can do something to keep this law from being approved.”

Rebeca Garcés noted, “What we are playing with is literally life and death, therefore, all of us who support life, especially the most vulnerable, we must make an effort to participate in these activities and raise your voice.”

During the march, some pregnant women sounded sonographs with the heartbeats of their children, amplifying them with megaphones. They called this “La Voz del Corazón” [the voce of the heart], which gave these unborn children a symbolic voice, and showed that there is another human being, a baby, in their bellies. Also, the “Cueca for both lives” was heard, which was accompanied by the sky blue handkerchiefs, followed by attendees doing the Cueca dance, a traditional dance of the area.

To close the demonstration of the blue handkerchiefs, leaders read a petition that was delivered to the Government soon after, requesting laws that would protect the lives of both mother and child. The Collective for the Two Lives detailed that it will call a march of national character late in 2018.

Read the original on the Regnum Christi Chile site