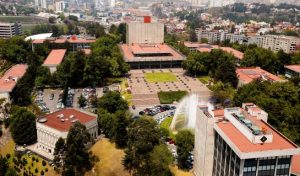 “There’s a vast richness in all the liturgy, symbology and protocol of the Catholic Church,” affirmed some journalists who attended a professional development workshop on December 1st.

The Regnum Christi communications office in Mexico realized the need for such a course, and put it together, working with journalists. Pablo Pérez de la Vega, the communications director for Mexico and Central America noted, “We thought it would be important for us, and valuable as training for journalists, to organize a workshop that offered Catholic Church concepts regarding liturgy, protocol, teaching, hierarchy, etc. We coordinated it with the faculty of Humanities at the Ánahuac University, elaborating a valuable content to complete this iniciative.”

The workshop began with a friendly breakfast, informally sharing details of the life in journalism and joking about “media slips” they all knew about. Then they moved to one of the executive rooms of the postgraduate building for two presentations.

Professor Guillermo Macías Graue, coordinator of the Regina Apostolorum [Queen of the Apostles] Institute of the Ánahuac University, gave the first session. He shared anecdotes and cultural information to explain how the protocol works with the Vatican, the Holy See, and the Church as a whole. 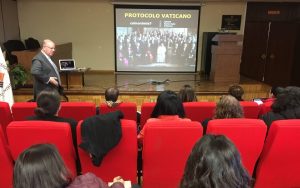 Professor Ricardo Morales Arrollo, coordinator of the Evangelli Gaudium [Joy of the Gospel] Center, presented the second part.He explained various topics: the types of documents generated by a Pope and the Church in general, how the liturgy operates, the liturgical calendar, and terminology proper to the liturgy. He also answered a lot of questions the journalists had to help them better understand Catholic activities they’d seen so they could better report in the future.

The day ended with awards and a group photo. Journalists came from different type of media: national Mexican media, international media and Catholic media. The journalists asked that similar workshops be organized in the future which seemed to gain support from Fr Cipriano Sánchez, LC, rector of the Ánahuac and Prof. Carlos Lepe, Dean of the faculty of Humanities, Philosophy, and Spanish. You can read more about this event on the Spanish-language Regnum Christi site.