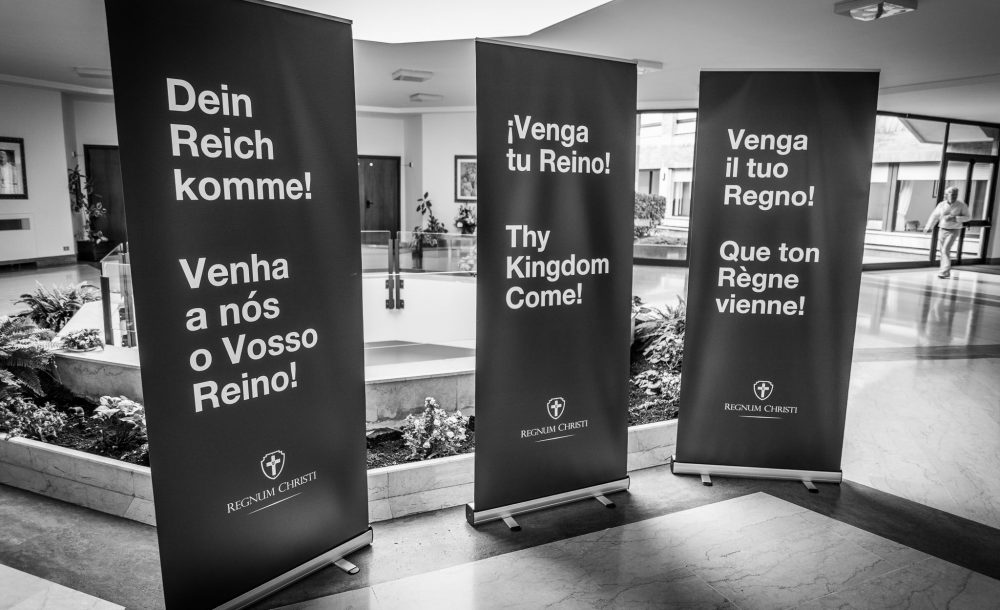 The Legionaries of Christ are a religious Congregation of priests, of pontifical rite, founded in 1941 in Mexico. In 1965, Pope Paul VI granted the Decretum Laudis to the Legion. Pope Francis approved our revised constitutions in November of 2014.

Regnum Christi is an Apostolic Federation within the Catholic Church. The Holy See granted definitive approval of its statutes in November of 2004.

The Legion and Regnum Christi share the same charism, spirituality and mission. We work as Jesus did. We reveal His love, form apostles and send them out to help build the kingdom of Christ. We awaken the individual and the family to their mission in life and in the Church.

We work in cooperation with and in support of the church at all levels. We serve the Church in every way we can, wherever it has need – especially in the formation of apostles at the service of the Church.

The Regnum Christi Federation, made up of 30,000 members, has been transforming culture with the light of the Gospel since 1941.

In an audience on June 12th, Pope Pius XII says that the new religious congregation must contribute to the formation of Catholic leaders, especially in Latin America.

The Cumbres Institute (a school) opens in Mexico City. Through formative and spiritual activities, the students and families can share in the spirituality and apostolic ideals of the Legionaries of Christ. In 2014, 66,653 students benefitted from the formation in the faith that the Legion of Christ offers, in 121 schools, in 12 countries.

Cardinal Clemente Micara consecrates the minor basilica of Our Lady of Guadalupe and Saint Phillip, martyr, in Rome. The basilica is entrusted to the pastoral care of the Legionaries of Christ.

The first draft of what will be the statutes of a movement for lay people is drafted. Shortly after, the name Regnum Christi (Kingdom of Christ) is chosen.

The Interamerican Cultural Center is inaugurated in Mexico City for the formation of lay people.

In February, Pope Paul VI grants the Decretum Laudis (Decree of Praise) to the Legion of Christ. With this act, the Legion, which until the moment had been under the authority of the diocese of Rome, ceased to be of “diocesan rite” and began to depend directly on the authority of the Holy See. The sameact approved the Legion’s constitutions “ad experimentum.” In March, the first Regnum Christi center is opened in Madrid, Spain.

On January 3, the first group of lay people officially join the Regnum Christi Movement in the Basilica of Our Lady of the Pillar in Zaragoza, Spain.

February 25: The first formation center for consecrated women is founded in Dublin, Ireland. Foundation of ECYD (Education, Culture, and Youth Development): an international organization of children and adolescents who make an alliance with Christ and each other to build a better world.

On January 25 in Cubas de la Sagra (Toledo, Spain), men’s consecrated life in Regnum Christi begins with the consecration of two young men. In December, they will be joined by seven more.

In 1972, various ECYD clubs are founded: Club San Pablo in Salamanca (February 1972), Club Faro in Monterrey, and Club Kilimanjaro in Mexico City (September 1972), and the Crystal Lake Youth Center in the United States (November 1972). Shortly afterward, Club Vetta was founded in Rome (January 1973) and Club Everest in Madrid (May 1973). In June, 2014, there were 10,034 members in ECYD throughout the world.

In July, the first International ECYD Convention is held in Ontaneda, Santander (Spain). 1976 The “Alpha Omega” center for family counseling is founded in Mexico City and the Escuela de la Fe (School of the Faith) Institute is founded to form educators and teachers of the faith.

On June 29, the Holy See gives its definitive approval to the Constitutions of the Legion of Christ. In July, the first coworkers’ course is held in Cuernavaca, Mexico. Coworkers (now called Mission Corps volunteers) are young people give one, two, or more years working in Regnum Christi.

A team of Regnum Christi youth in Mexico City founds “Gente Nueva” (New People), an organization that aims to promote human values among young people. It was the first apostolate in the Movement which was founded by lay people. It quickly grew, expanding to other cities and countries.

About 100 youth carry out evangelization missions in rural Mexico. This marks the beginning of the apostolate “Juventud Misionera,” which in English-speaking countries is called Mission Youth.

On the 50th anniversary of the foundation of the Legion of Christ, Pope John Paul II ordains 60 new priests in St Peter’s Basilica in the Vatican. At the same time, the first world Regnum Christi event is held in Rome, gathering thousands of members.

During Holy Week, “Juventud Misionera” (Mission Youth) organizes the first “Megamission” in Mexico, with 1,500 youth participating. The following year, families also begin to participate in the “Megamission.” Each year since 1994, Regnum Christi has organized “Megamissions” in Mexico during Holy Week. In 2014, 18,000 missionaries participated, evangelizing in 2,000 rural communities.

NET is founded as a Catholic formation program for children. Its purpose is to strengthen the family as the school of evangelization and to make each home a domestic church. The English equivalent is K4J.

On the 60th anniversary of the foundation of the Legion of Christ, the first International Youth and Family Encounter is held in Rome, culminating in an audience granted by Pope John Paul II to the participants in St Peter’s Square.

The apostolate Pilgrim Queen of the Family is born. On November 26, the Holy See grants definitive approval to the Regnum Christi Movement Statutes.

The Congregation for the Doctrine of the Faith, after investigating the accusations against Fr. Maciel, publishes its decision to invite Fr. Maciel “to a reserved life of prayer and penance, renouncing all public ministry.”

On January 30, Fr Marcial Maciel passes away in Jacksonville, Florida.

In February, the congregation of the Legionaries of Christ publicly confirms that Fr. Maciel had a daughter in the context of a prolonged relationship with a woman, and other grave misconduct. In March, Pope Benedict XVI decides to initiate an apostolic visitation to the institutions of the Legion of Christ. The apostolic visitation, carried out by five bishops, begins on July 15th and ends on May 1st, 2010. The bishops published their conclusions after submitting them to the Holy Father.

Pope Benedict appoints Archbishop Velasio De Paolis as pontifical delegate, with the task of guiding the congregation of the Legionaries of Christ through a process of revision and renewal. In October, an apostolic visitation to the consecrated members of Regnum Christi is also announced, to be carried out by Archbishop Ricardo Blázquez.

The Legion of Christ begins the process of revising its Constitutions. Archbishop Blázquez carries out the apostolic visit to the consecrated members of Regnum Christi and submits his report to the Pontifical Delegate.

Between January and July, the consecrated women and lay consecrated men produce the drafts of their respective statutes.

During the summer, the process of revising the Constitutions of the Legion of Christ comes to an end.

In November, the first General Assembly of the Lay Consecrated Men of Regnum Christi is held. Jorge López is elected as general director. The Assembly also elects the rest of their general government and submits their statutes for approval. The Pontifical Delegate approves their statutes ad experimentum on December 12th.

In December, the first General Assembly of the Consecrated Women of Regnum Christi is held. Gloria Rodríguez is elected as general director. The Assembly also elects the rest of their general government and submits their statutes for approval. The Pontifical Delegate approves their statutes ad experimentum on December 12th.

In January and February, the Extraordinary General Chapter of the Legionaries of Christ is held. The Chapter submits the Legion’s Constitutions to the Holy See for approval and elects Fr. Eduardo Robles-Gil, LC, as general director, along with his council. On February 25th, the Chapter ends and, with it, the mandate of the Pontifical Delegate. The Legion of Christ and Regnum Christi once again depend on the Congregation for Institutes of Consecrated Life and Societies of Apostolic Life.

On July 3rd, the Holy See names Fr. Gianfranco Ghirlanda pontifical assistant to the Legion’s government, with the principal task of helping arrive at a definitive canonical configuration for Regnum Christi.

The process to revise the part of the Statutes of Regnum Christi that affects the lay members of the Movement begins in October.

On October 16th, the Holy See approves the Constitutions of the Congregation of the Legionaries of Christ.