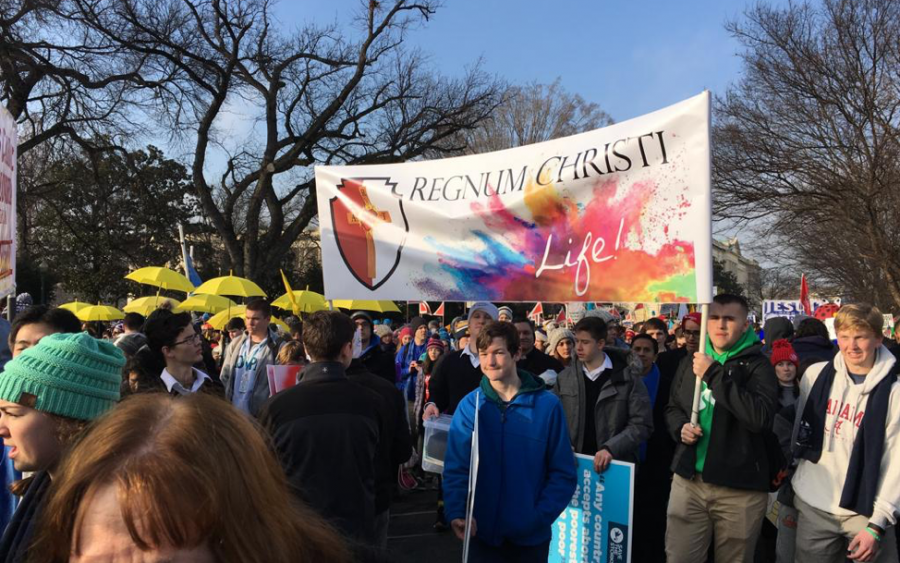 The 46th annual March for Life was held January 18, 2019.  Regnum Christi was there.  Many members, students from RC Education schools, Consecrated and Legionaries made the trip to support the sanctity of life and march in support of its protection at all ages and stages. Many other Regnum Christi members made the pilgrimage to march in support of the sanctity of life with their parishes and dioceses. Here’s a snapshot of some of their experiences.

Dr. James Stone, the theology chair of Pinecrest Academy in Cumming, Georgia, led a group of high school juniors who spent the week leading up to the March in Washington D.C. exploring the sanctity of life in different facets. Alison Stone, Pinecrest Art Teacher and Chaperone said, “This journey began in the Our Lady of Guadalupe Chapel at Pinecrest Academy where the junior class learned the historic and spiritual significance of a pilgrimage as a voyage to historic and sacred sites. It has the purpose of bringing one closer to God and loving one’s neighbor in the process. During this expedition the students learned about the high ideals on which this country was based, namely, our inalienable God given rights of life and liberty. While on this trip they learned about legislation to protect the unborn. They learned the history of our great nation and got to experience it, too.

They had a walking tour of the White House, Treasury Building, Supreme Court, The Capitol, Library of Congress, the Memorials on the National Mall, the Newseum, Arlington National Cemetery, The Tomb of the Unknown Soldier, President John F Kennedy’s Grave, the Holocaust Museum, the Basilica of the Immaculate Conception, the Shrine of John Paul II, the Franciscan Monastery of the Holy Land in America, the Right To Life Youth Rally, the Mass for Life & the March for Life.” The evening before the March for Life, the students heard from Karen Cross, Political Director of the National Right to Life. Ms. Cross shared her experience of being a teenager confronted with an unplanned pregnancy, who chose abortion, regretted that decision, and has dedicated her life to protecting unborn babies and helping other women to choose life.

Everest Collegiate & Academy students from Clarkston Michigan also made their trip to the March for Life a comprehensive week long educational and formative experience.  Part of that experience was meeting up with Pinecrest Academy students for Mass.  On the school’s blog, Miss Maria Mellis details,

“On Thursday evening, students joined fellow RC school students from Atlanta, Georgia’s Pinecrest Academy for an evening Mass, and Fr. Brian [Hoelzen, LC,] preached powerfully about our need to recognize and abandon tendencies of indifference in regards to all human life, be they the unborn, our peers, or the poor. He identified three modes of indifference: to not notice, to notice and not care, and finally, to both notice and care, but to take no action. The challenge to each of the participants was to choose caring and action over indifference in every relationship in our lives, including and extending beyond the unborn.” 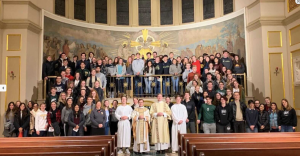 Legionaries of Christ Novitiate and College of Humanities

35 Brothers from the Cheshire, CT, Novitiate and College of Humanitiescame to Washington DC for the prayer vigil, rally and March.  They also visited Arlington National Cemetery and the National Mall, praying for those who gave their lives in the service of the United States. 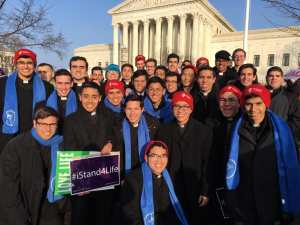 Photo:Brothers from the Legionaries of Christ Novitiate and College in front of the Supreme Court

The brothers came “to thank God for the gift of life, and to march to protect that gift for all,” according to Br. Peter Fagan, LC, who is originally from Denver Colorado and is currently serving in his internship as assistant to the rector of the seminary, Fr. Kevin Meehan. 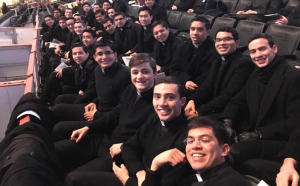 Photo:Legionary brothers at the rally before the March for Life, “otherwise known as the wild party that begins way too early in the morning,” according to Br. Peter Fagan, LC 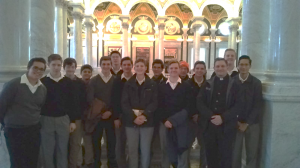 Photo:Sacred Heart students at the Library of Congress

Photo:Preparing for the procession at the Opening Mass of the Vigil for Life 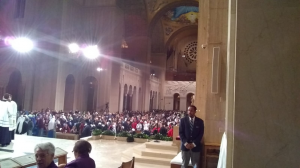 Photo: Fr. Robert DeCesare, LC, shares a priest’s eye view of the Opening Mass of the Prayer Vigil for Life at the Basilica of the Immaculate Conception

Fr. Matthew Schneider, LC, attended the March for Life with many other Regnum Christi members from Washington DC.  In his blog he rounds up 14 of the best signs he saw among the many thousands at the March for Life. 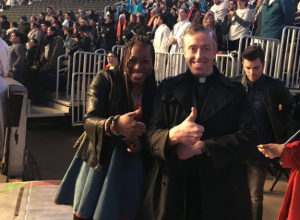 Photo:Fr. Matthew Schneider, LC, at the rally before the March for Life with pro-life Catholic speaker Obianuju Ekeocha

Let's pray for Deacon Santiago Mejia who will be o

Congratulations to our 29 Legionaries to be ordain