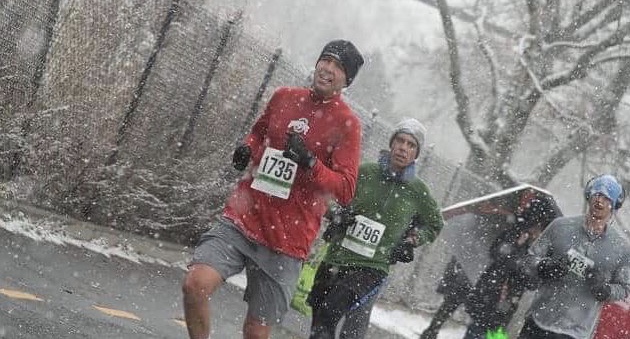 (picture above: Fr. Michael Sliney runs in a half-marathon in Brooklyn in the snowy weather)

Legionaries and consecrated members of Regnum Christi have hobbies and pastimes like anyone else. For some, it’s running. A few take this a little more seriously, including Fr. Daniel Pajerski, LC, Fr. Michael Sliney, LC, Fr. Brian Hoelzen, LC, Fr. Stephen Dyas, LC, Tony MacDonnell (Consecrated Man) and Katie Tuttle (Consecrated Woman), who all ran marathons recently. All four priests ran their marathons within nine days of each other. 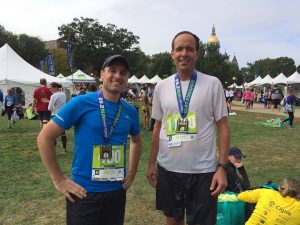 For Fr. Michael, running marathons has a spiritual aspect: “I wanted to offer up that effort for vocations: that’s what drove me during my practice runs and especially during the Marathon itself. When it hurt, I thought about all the kids thinking about the vocation, trying to gain graces for them.” Fr Sliney had offered up his marathon two years ago for a woman then battling cancer, who is now cancer free.

Fr. Daniel takes a more stoic approach, noting: “I’m one of those guys who has their ‘nothing box,’ and when I’m running, I just focus on running, so I can’t have a lot deep prayer going on in the moment, but I try to make intentions beforehand.”

Katie got started in Michigan: Fr. Pajerski had mentioned he was running the Boston Marathon and asked for sponsors. People were generous, and he raised about $10,000 for the seminary in Cheshire. She shared, “I ran track and cross-country in high school, and I was sitting there thinking, ‘I’d like to race and raise money for vocations.’” She said that she always offers her races for vocations.

Katie also reflected on 1 Corinthians 9:25 in light of running marathons. St Paul says, “Every athlete exercises self-control in all things. They do it to receive a perishable wreath, but we an imperishable.” Katie reflected, “Training for the marathon was really a motivation for my life. I want to be a saint. I want to go to heaven; that’s really my goal. I want to strive each day to reach that goal.”

Fr. Michael, Fr. Daniel, Tony and Katie had each run marathons before. Fr. Pajerski is definitely the fastest at 3:12:29, in fact an analysis of all marathon finishers found that only about 9.2% finished under 3:30. Katie Tuttle wasn’t far behind at 3:30. Most of the others had times between 3:30 and 4 hours which puts them in the top 30% of finishers. 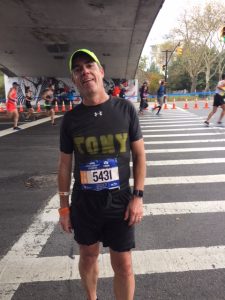 They ran in four different marathons.

Fr. Michael and Fr. Daniel both mentioned how the marathon training helps them. Fr. Michael spoke of health: “It’s a great way to stay in shape and keep your mind and body running on all cylinders.” Fr. Daniel instead focused on how it helps him organize, “It helps me use my time well because it requires discipline in my time to get training in.”

Independently, Fr. Pajerski, Fr. Sliney and Katie Tuttle all adopted the Hanson training method this time. The Hanson method is about 4 to 5 months of training where you run 25 to 50 miles a week , then take one day off, have one long run of 10-16 miles, one strength or speed run which is 5 to 7 miles of hard running, either an interval or in short bursts, and another marathon pace run of 6-10 miles where you run the pace you want to maintain through the marathon. One of the unique aspects of this method is that it focuses on weekly miles without having any overly long runs, with the longest run being 16 miles. 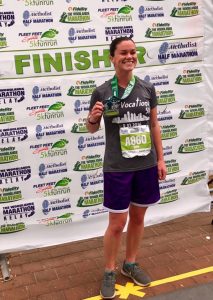 Katie Tuttle noted, “The whole experience of training for and running a marathon is a very spiritual experience for me. Sometimes, when it’s an easy run day, I’ll pray; I’ll take in the scenery and reflect, and pray a rosary. But the days it’s a hard run, the only prayer I get out is, ‘Lord, help me get through this workout.’” She finds inspiration from people in tough circumstances who run, like a blind person, or someone with prosthetic legs.

This time, Fr. Sliney had an extra challenge: about halfway through training, he pulled a hamstring. After asking around, he decided he could go on if changed his running style to be more on the toes of his feet. That took the pressure off of the hamstring, but caused issues with his toes and calves. He took it as one more of life life’s obstacles, saying, “We can either give up, or we can find a way to make it work.”

Fr. Sliney had a time of 3:49 in a previous marathon, and had the goal to do better. He had a strong pace the first 20 miles, but around mile 18 he started having cramps. He had to run through the pain for the last 8 miles. This reminded him of vocations, and his own priesthood. “Sometimes it’s going to hurt to persevere in this thing, and there’s a finish line.” He said, “I wanted to die as a faithful priest and this is a little test which could have spiritual ramifications: I can’t give up.” His final time was a little slower at 3:59 but he was satisfied, given all the pain he battled through.

When he was asked what he’d say to other Legionaries, consecrated men or women, or Regnum Christi members thinking about a marathon, Fr. Pajerski responded: “If you have the desire, try it.”