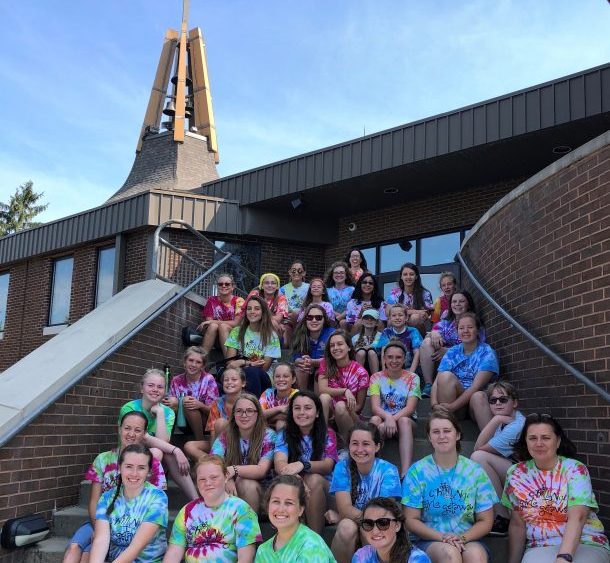 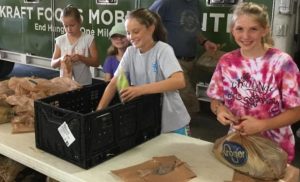 This summer, 35 teenaged girls participated in a camp near Indianapolis focusing on serving others. Their Challenge Club has been running this “Girls Getaway” week for 11 years.

Held July 9–12, 2018 at the Our Lady of the Apostles Family Center near Greenfield, Indiana, just outside Indianapolis, the Girls Getaway differs from many summer camps, even Conquest and Challenge, in its focus on service. On each of the four days, the girls go out to serve the community. This year, 35 girls aged 9 to 18 served at seven different sites over the four days.

The first day the teen girls arrived at a barn where about 500 people were waiting for food. Then a truck came in with tons of produce and frozen foods. This was a monthly mobile distribution by Gleaners, which collects and distributes bulk food donations in the Indianapolis area. The girls repacked the produce from huge packages into family sizes. Lorianne MacDonnell, a consecrated woman who helped out, was astonished at how well they worked. “It was hot in there,” she said, “so I was really impressed with their spirit of work and dedication.”

Later the girls went to Gleaners’ main distribution warehouse, which seems bigger than Walmart, with trucks constantly arriving. Lorianne was again impressed. “Even standing for hours,” she remarked, “the Challenge girls’ spirit of service shone through.”

The teen girls also visited the Little Sisters of the Poor, who run a nursing home for the elderly poor. They put on an ice cream social and sang, then sat down for one-on-one conversations. They ended this visit with evening prayer with the sisters.

Elle, a high school team leader, was moved by one woman they met at the Little Sisters of the Poor nursing home, who had been a riveter during World War II. “Her stories were very touching,” Elle said. “There were so many emotions, and she was interesting to talk to.”

Elle finds the camp uplifts her as much as it does those they serve. “Every year I come back feeling a lot better than I did coming in. This camp can flip your whole way of looking around: it changes you.”

Emily, another team leader, mentioned, “Each service project shows you a new area of need that you don’t realize when you’re in your own community.” For instance, the parish of Our Lady of Mount Carmel runs a ministry called the Merciful Help Center. The Challenge girls went there to prepare school bags for needy families: toiletries, food, socks, and other items that most of the girls took for granted.

Emily described meeting a Baptist preacher at a mobile food pantry. “He told me that the reason he was here at the food pantry was because he’d spent all of his income and all of his wife’s income on rebuilding their church after a fire,” she said. “So, he had to come and get food from the food pantry. This struck me as powerful, as he gave up all of his earthly money so that his parishioners, his church members, could have a place to go in this troubled neighborhood of Indianapolis.”

Lorianne explained that it’s not always obvious who is in need. “It wasn’t everyone who looked super poor, which I think impressed the girls. Like, one man had a wife going through cancer treatment, so he had to come to get food for the rest of the family.”

Another powerful experience during the camp was adoration, which team-leader Elle found very moving.  Lorianne also commented both on the girls’ spirit of prayer: “It was impressive to see how much the girls loved the presence of Jesus in the Eucharist, and wanted to be there to pray and gather strength from him.”

Rosie Kube, one of the organizers, explained that the cost of the camp is kept affordable by borrowing a bus from the parish school to transport the campers and by getting families and businesses to sponsor them. The names of the sponsors are then printed on the backs of the shirts that the campers wear.

Those shirts do more than just advertise the sponsors, as one camper named Aynslee discovered one day when they were at the Gleaners’ warehouse.

“It was a hot day, probably around 85 to 95 degrees,” she remembered. “We, the girls and I, had been out there for maybe already two hours and the lines seemed like they would never end. People were hot and sweaty and wanted to go home. But I felt upset for the people in line. Those people may have to do that every day, rain or shine. And it’s not like they have it easy, either.”

Aynslee saw a tired woman in her 40s or 50s come in. Instead of responding to Aynslee’s offer of help, the woman asked, “What group are you from?” pointing to the shirts all the teen girls were wearing. Aynslee said, “Oh, I’m from Challenge Girls. It’s a group of girls who get together to learn more about God.”

The woman asked a few more questions and Aynslee answered. Then, as she was about to move on, the woman told Aynslee, “Little girl, you’ve restored my faith. About five years ago, I left the Catholic Church because my brother had died. I felt betrayed by God. But I’ve decided I want to go back to there now. Thank you.”

“I was astonished,” Aynslee said. “Me, a 12-year-old ‘little girl’ had restored someone’s faith. I looked down the line to try to see her again, but she was gone. I didn’t think much about her leaving, or where she had gone … I remind myself of that and, pray for the woman every day.”

Check out the Challenge site for another story about this camp.