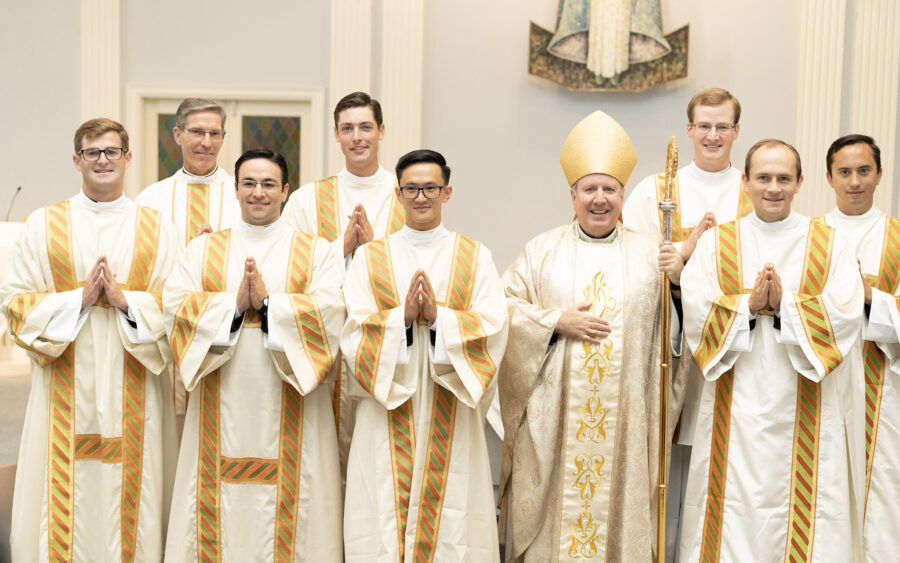 Surrounded by friends, family, and Regnum Christi members of all vocations, seven young men were ordained to the transitional diaconate by Bishop Robert McClory on July 31st at Notre Dame parish in Michigan City, Indiana.  All seven of the young men are from the United States, and although their backgrounds and stories are diverse, they are united in their perseverant responses to God’s call to the priesthood as a Legionary of Christ. They entered their last stage of preparation for priestly ordination by receiving the sacrament of Holy Orders as transitional deacons, which will be followed by their ordination to the priesthood in 2022.

During his homily, Bishop McClory “today you give public witness that there is no greater life to give oneself to than to Christ Himself.” Explaining the role of the deacon in the Church, he referred to the first reading of the Mass (Acts 6:1-7b), which detailed how the early Church chose seven men to serve as the first deacons.  Noting that the ordination landed on the feast of St. Ignatius of Loyola, he counseled that “a deacon is to have much confidence in their faith in Christ Jesus, and so we turn back to St. Ignatius and the tremendous prayer he gave us, the suscipe.”  He explained that the prayer expresses the trust, surrender, and service that a deacon should embrace.

Take, Lord, and receive all my liberty,
my memory, my understanding,
and my entire will,
All I have and call my own.

You have given all to me.
To you, Lord, I return it.

Everything is yours; do with it what you will.
Give me only your love and your grace,
that is enough for me.

In closing remarks at the end of the ordination Mass, Fr. Shawn Aaron, LC, territorial director, thanked Bishop McClory for elevating the newly ordained to the dignity of the diaconate. He reflected that through the bishop, “Holy Mother Church has given them weapons and tools to fight a battle that is bigger than they are, and yet the tools and weapons they have been given are greater than the enemy they fight. They are invited to trust and believe in that power.” He exhorted the new deacons to remember that they are “just men, but at the same time, your family, Regnum Christi, the whole church, hopes and expects that you are men deeply rooted in prayer, love our lord, very much attentive to the will of the father and guided by the Holy Spirit.”

The new deacons are: 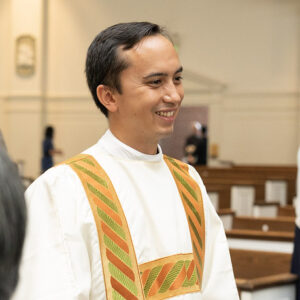 Seventh in his family, Deacon Robert remembers having the aspiration to become a priest when he was little and says that the priesthood has always been on the radar. He had a wonderful experience of attending Immaculate Conception Apostolic School, as did three of his brothers. For him, “the novitiate was a time of mature discernment and gave me the time, place and guidance to reflect on my vocation and ask for God’s light.” His Filipino heritage is close to his heart, providing many fond memories of food and fun. His immigrant father’s hard work and perseverance, as well as the way he included Deacon Robert in many special projects, impacted his life tremendously. He loves the beach, swimming, sports, hiking, chess, dominos, card games, music, and Chopin. As he continues on his journey he asks, “Pray for me and the ministry I am beginning. The journey is just starting.” 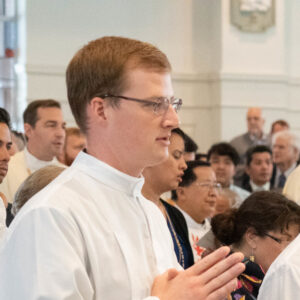 Deacon Erik originally resolved to give God three months of his life in order to discern the priesthood. He was leaving behind his engineering studies and the thrill of watching football at the University of Alabama. He had the blessing of a wonderful Catholic upbringing alongside his two brothers and two sisters. He reflects, “Indeed, God has blessed me and made me incredibly happy. Following Christ is not easy, but if there’s one piece of advice that I have tried to follow, it is this: Don’t get lost in the day-to-day. Heaven is our goal, so always remember that and keep your ideals high. Christ asks us for everything, but he doesn’t necessarily take everything. And he always gives us far more in return. Praise him!”

Deacon Erik will be going to work at The Highlands School in Ecuador. 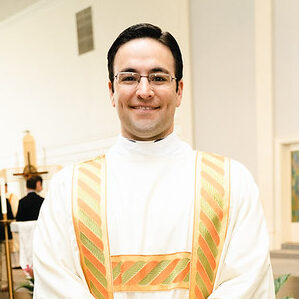 “I wanted to be like him.” This was the realization that Brother Adrian had as he first received the call to discern the priesthood at age 11, while at a summer surf camp, inspired by the example of a priest who was funny, pious, reverent, a great preacher, and all-around fun. Born into an international family from Brazil and Mexico, growing up in San Diego, and one of four children including a brother who is a 2nd year seminarian with the Legionaries of Christ, he enjoyed traveling with his family and learning Portuguese before attending Immaculate Conception Apostolic School in high school. He has studied in Connecticut and Rome and served as prefect of studies in Argentina at an apostolic school, as well as teaching at the novitiate and apostolic school in Aruja, Brazil. Philosophy has become his focus, and he will begin studies for a Doctorate in Philosophy in preparation to be a Philosophy professor at the Pontifical Athenaeum Regina Apostolorum. He shares, “If you give your life to Christ, he cannot be outdone in generosity. That is definitely my experience. God’s plans are far bigger than we can ever dream of. Please pray for me as I begin my service as a deacon and soon to be a priest. I still feel so small before such an awesome gift and responsibility. Through your intercession, may God give me the grace to really configure my life to his and be a channel of his light, life, and grace.”

Deacon Adrian will return to Rome to study at the Angelicum for his Doctor of Philosophy as he continues to prepare to be a professor at the Legionaries’ seminary. 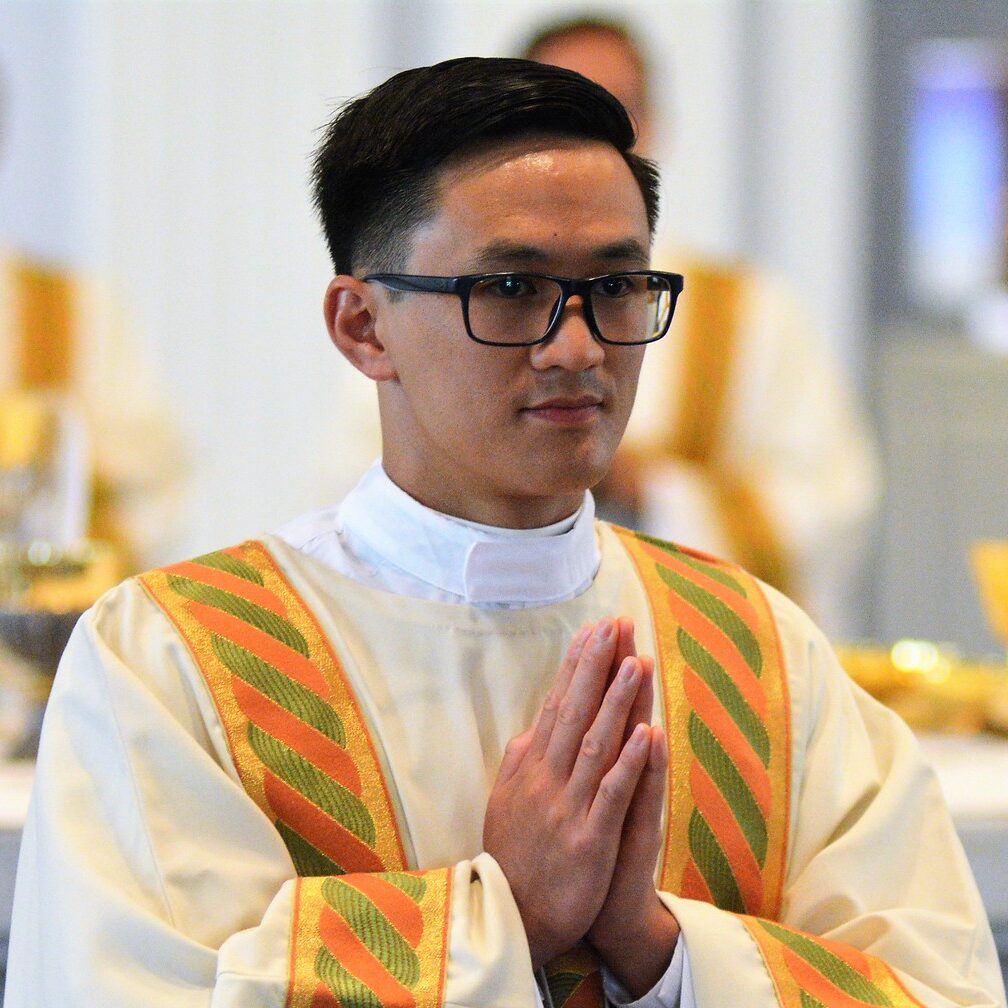 “Who am I? What am I doing? Where am I? What time is it? Am I dreaming?” This existential crisis, in his second year of seminary, was brought on by an interruption in REM sleep and the call to adoration which ultimately helped him know and solidify his understanding of his call to the priesthood. He was raised in Nebraska along with his two sisters. Hard work, tenacity and faithfulness shaped his youth thanks to the example of his father and that of two of his uncles who are priests. At 12 years old he entered Immaculate Conception Apostolic School in New Hampshire. He has studied in Connecticut and Rome and taught for three years at Canyon Heights Academy, a Regnum Christi School in California. He loves discovering, exploring, and learning new things, including (as a child) the joys of chocolate milk. Brother Tamson is adventurous – with a love for flying, skydiving, hiking, martial arts, magic tricks, and people. His advice for others is “Be honest. Face the truth.”

Deacon Tamson is going to be working in San Jose, California. 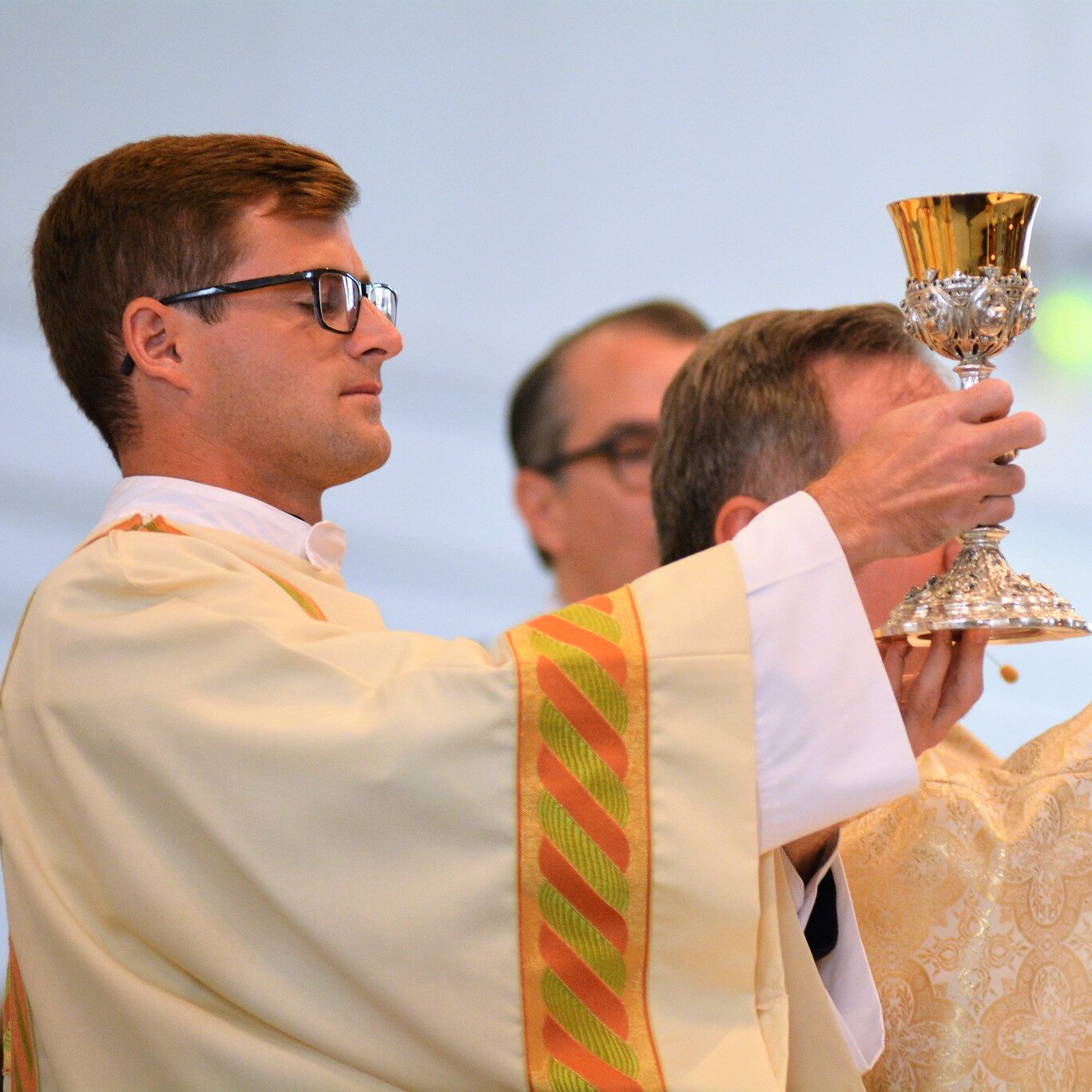 “Christ does not disappoint when he invites us to follow Him; He has promised a one hundredfold reward to all those who leave everything to follow Him. This I have experienced on both a human and spiritual level.” Deacon Luke always knew that God had a plan for him, and his parents instilled a strong faith and trust in God in him. Growing up as the third of six children in a family that traveled extensively, he never imagined becoming a priest. Sports and music and architecture – those were his joys. That was until Divine Mercy Sunday in 2009 when he encountered God’s mercy in a powerful way and his prayer became focused on learning God’s plan for him. A five – day retreat at the Legionaries of Christ’s Novitiate and College of Humanities in Cheshire, Connecticut, in the company of the contagious enthusiasm of hundreds of young men who were also seeking God’s will, lead to his discerning a priestly calling. As a brother his greatest joy was found in prayer and reflecting on God’s mysterious, yet palpable, presence in his daily life. Deacon Luke is co-host of the podcast, “TGIFF” (Thank God It’s First Friday) with Br. Matthew Torrey, LC. He sums up his experience by saying, “God has called me to be a Legionary priest to experience and to share His love and joy.”

Deacon Luke will spend the next year working in Monterrey, Mexico. 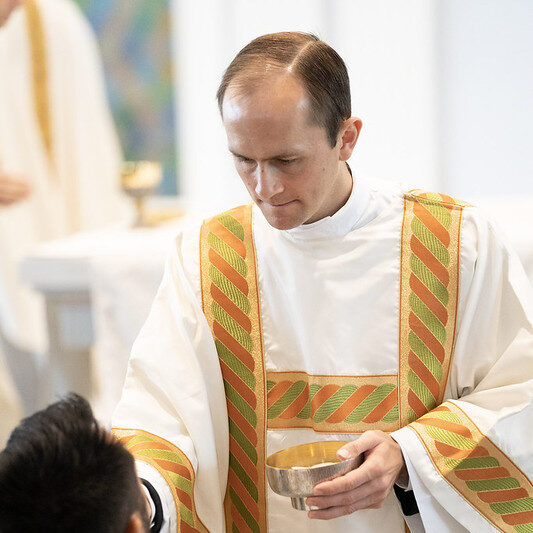 “I am my beloved’s, and my beloved is mine” (Song of Songs 6:3). Deacon Dain’s relationship with Christ is down to earth, intimate, personal, real, warm, and palpable. Throughout his life, he has experienced being loved by the Lord in spite of his smallness. The second of ten children, raised on a dairy farm in Minnesota, he began his formation with the Legionaries of Christ at age 13, attracted by the way the Legionaries related to Christ. His studies and ministry have taken him to Ireland, Italy, and the Ivory Coast (in addition to the United States).  Deacon Dain is the author of three books, The Primordial Father Wound, The One Thing Necessary, and God’s Poetic Path.  He says, “I consider myself the happiest man alive, as a beloved of the Lord. Pray with me that I may be a holy, humble priest who listens and loves.”

Deacon Dain now returns to Rome to studying for his licentiate in Theology while continuing his mission in the Ivory Coast. 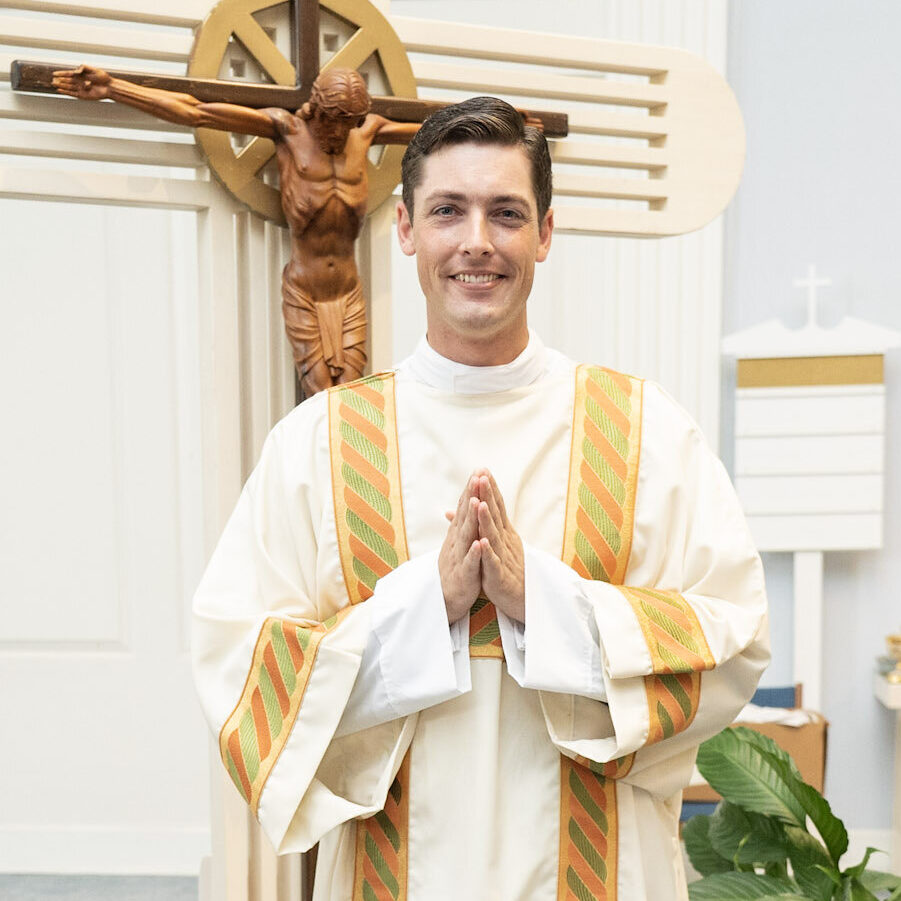 The oldest of seven children from Dayton, Ohio, Deacon John acknowledges the blessing of a large Catholic family and their involvement in ECYD and Regnum Christi activities. An awareness of his vocation came after a handshake and an experience of an athletic, normal, and smart Legionary priest at a Conquest club meeting. He thought, “That’s all I ever wanted to be without ever knowing it.” The more official call came during a guided meditation at his confirmation retreat, when he knew he had to begin a serious discernment. He attended the Immaculate Conception Apostolic School in New Hampshire beginning in 9th grade. After graduation from high school, he joined the Novitiate, then spent two years in Dublin, Ireland. He also studied in Connecticut, New York, and Rome. Working at an apostolic school in Guadalajara, Mexico was a challenge he welcomed as an opportunity for personal growth, showing him how much more he was capable of doing. He enjoys baseball, hiking, reading, and visiting historical sites. He desires to help young people discover the great plans and joy that God has for them. He advises that “In following your vocation, it’s better to trust in God than to try to do it on your own.”

Deacon John now goes to Atlanta to work with young men and in promoting vocations.

The video of the Ordination mass is available below, and an extensive photo album of the Mass and the reception that followed can be found here.