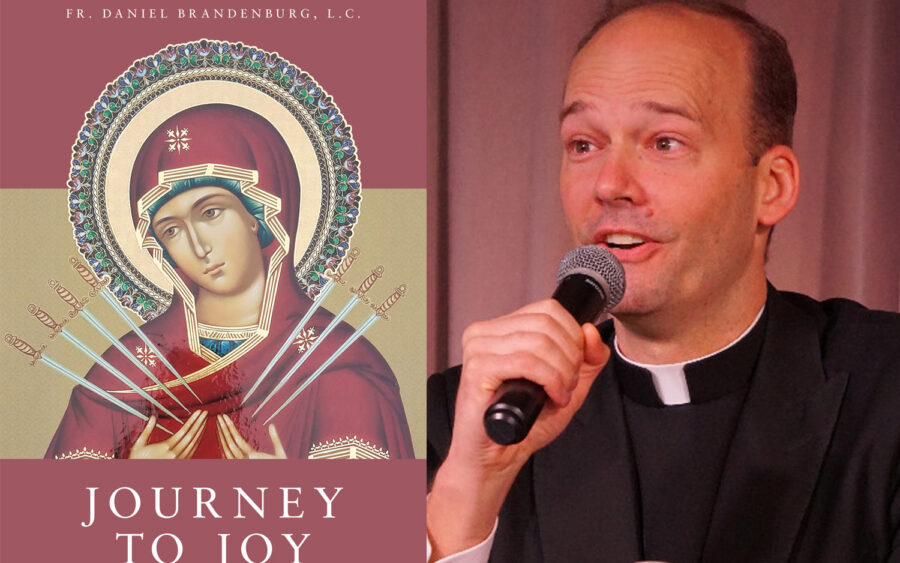 Fr. Daniel Brandenburg, LC, has written a book and created an accompanying retreat called Journey to Joy: Reflections on the 7 Sorrows of the Blessed Virgin Mary.

Fr. Daniel described one woman he had given spiritual direction to for some time. She had struggled in her relationship with Mary and different books did not seem to help. He offered her the manuscript before it was published and she said that it revolutionized the way she looked at Mary, opening up a whole new relationship with Mary. She noted, “Up until now, I’d always been kind of jealous of her [Mary] because she was a perfect woman without any problems or struggles because she was immaculately conceived. Now, I understand that she’s a woman just like me: she struggled and she suffered. Now I can truly understand how she truly is my mother.”

The idea for this book came in 2015, when a group of women in Louisville, Kentucky asked Fr. Daniel for a retreat on Mary’s seven sorrows. Fr. Daniel described how he proceeded after that proposal: “I began to dedicate some time to prayer and meditation on the topic.” He noted, “Even after so many years of Legionary formation, I didn’t know what the devotion of the seven sorrows was all about. We’re dedicated to Our Lady of Sorrows and I didn’t even know what the seven sorrows were.”

Fr. Daniel started with the seven sorrows in the scriptures, not focusing extensively on the devotions that have arisen from these sorrows. He explained, “I spent a lot of time meditating on the passages of Scripture referring to each of the seven sorrows. I tried to understand and put myself in a contemplation of place in each one of the sorrows.” He wanted to make very clear that this book was the fruit of meditation but is by no means a private revelation. He hopes it helps people but realizes it might not help everyone.

Looking back to history, he saw a lot of Christian artwork depicting the various sorrows, especially in Spanish-speaking countries. He also noted some variations in formulating the seven sorrows, but stuck to a kind of consensus view.

Fr. Daniel thinks this book and retreat are extremely relevant today, “because we continue to have suffering. Suffering is part of every human life. And learning to deal with suffering, work through it and come out on the other side is one of the most important things we can learn.” He notes that for Mary, suffering is not the end. She does not just grin and bear it. Instead, stated Fr. Daniel, “Her response shows us the way to transform sorrow in our life into joy. If we learn that secret, we have the secret to a happy and fulfilled life.”

The book is structured with a short introduction and conclusion surrounding chapters on each of the seven sorrows. Each of those chapters follows the same structure: picture from Christian artwork depicting the sorrow, a quotation from Scripture, some songs Fr. Daniel recommends for meditating on that sorrow, why this sorrow was existential for Mary, how she pivoted to transform the sorrow to joy and then conclude with reflection questions and a prayer.

Fr. Daniel thinks the artistic aspects are important. He thinks that it is important to use means like them to reach the other ways we are open to God such as emotions and senses. This is why he uses so many artistic works from the history of the Church representing Our Lady of Sorrows. He thinks these works will elevate our soul to Mary and Jesus.

In recent years, Fr. Daniel has had some particular sufferings that make this book more personal. He had a heart attack in 2016 when he was halfway through giving the first retreat series and writing the book. This colored the writing of the book. A week after he sent the first draft to an editor, he received a cancer diagnosis. After he was diagnosed with cancer, he did not change much substantially in the book although he added a few lines. He noted, “I was able to live it first hand in a deeper way. Everything that I had written, everything that I had meditated on in the sorrows of Mary and her suffering became much more real through lived experience. I was able to prove first hand that there can be great joy in the midst of suffering.” He experienced a certain sense of joy amidst the cancer like he saw Mary having joy in sorrow.

The material for the book was developed as a retreat and has been given as a retreat in various formats, including a two-day online retreat this year during Holy Week.