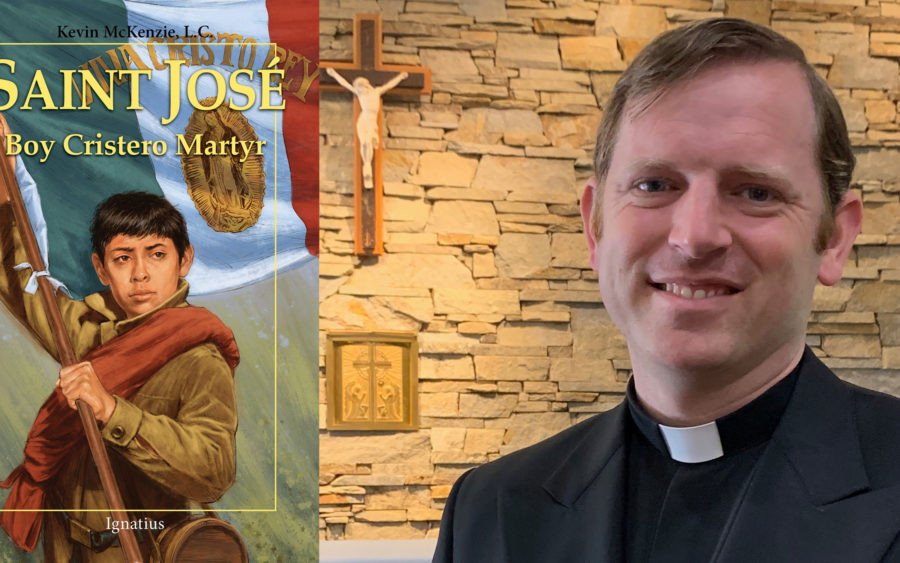 Fr. Kevin McKenzie, LC, got excited about St. José Sánchez del Río at age 12. This interest led him to study the saint and write a book about him, which has just been published by Ignatius Press.

Recently, Fr. Kevin spoke with us about his book, Saint José: Boy Cristero Martyr, and this young saint.

What led you to develop this interest in St. José Sánchez del Río?

When I was 12, Br. Eric came in as a substitute religion teacher and told us stories. One was about this boy, José Sánchez, who wasn’t even a saint at the time that I heard his story. He’d joined an army to fight for religious freedom in Mexico, and had ultimately given his life. I remember hearing that and fireworks going off in my head. I thought, “This kid was 13 or 14 and he gave his life for Christ as a martyr; I have to do something like that.”

Later on, I looked for a book about him. There were none.

Since that time, how did you come to write a book? What kind of research did you do?

About 2005, I realized there still wasn’t a book about José, so I needed to put something together. I wanted something similar to the Ignatius Press saints books I’d read, dramatizing the saint’s life while being true to history.

While doing some research, I found that there were a few things in Spanish. I eventually got the positio, which is the formal document used for his beatification.

The process from when I started until I self-published the first version in 2014 took 9 years. Time was tight as I was studying to be a priest at the same time, but I managed to write 30 minutes each day. My mom kept insisting that I send it to publishers, so I eventually sent it to three Catholic publishers: two rejected it, Ignatius Press said they wanted it. I’ve spent the last few years tidying it up for Ignatius to publish it.

Can you tell us a little bit of the story of St. José Sánchez? Can you summarize it for someone who doesn’t know much about him?

Mexico was a tough place during the 1800s. There were something like 19 revolutions in Mexico. We talk about the American Revolution and our Civil War without much in between.

The bishops eventually invoked their nuclear option, shutting down all public worship in August of 1926. People flipped out and decided to fight the government on their own. They spontaneously began the Cristero War, with the battle cry “Long live Christ the King!”

Meanwhile, José was growing up in west-central Mexico. His dad was a rancher and his mother was a housewife, but also part of the Joan of Arc brigade that would help the Cristeros, bringing bullets, food, bandages, etc.

José saw all of this, and also saw his uncle, Fr. Ignacio, shot in the leg by the government. His two older brothers joined the Cristeros and he wanted to as well. It might seem crazy, but his parents let him go off and join the Cristeros at 14. His mom didn’t want him to fight, so he became the general’s bugler and flag-bearer. He also did odd jobs like cleaning rifles and peeling potatoes.

He was involved in three battles. The first was the pitched battle of Los Cutos, then two ambushes: the first during Mass and the second where he was captured. The Federal troops had set up an ambush to capture the Cristero general during a raid to destroy telegraph wires. They shot the general’s horse and José, who was beside as the flag-bearer, offered his horse to the general.

He was imprisoned in Sahuayo where the mayor, Rafael Picasso, was his godfather. The mayor went to speak with José in the jail, which had previously been their parish church, but couldn’t convince him to change his mind.

Later that night José saw three roosters tied to the altar of the church turned into a jail making a mess. He broke the roosters’ necks. These were the fighting cocks of mayor Picasso, who was furious. He ordered José’s execution that night.

The soles of José’s feet were cut off and he was marched to the cemetery. They asked him repeatedly to deny his faith. He repeated, “Long live Christ the King!” as they shot him in the back of the head at about 10pm on February 10, 1928

The people in Sahuayo immediately knew he was a martyr. That night, people were already picking up dirt that his blood had fallen on to keep as relics.

Years later, as Picasso lay dying, he asked for a priest to hear his confession.

José was beatified in 2005 and canonized in 2016. He really inspired me to become a priest. I’ve known many young men who chose him as their confirmation saint, or dressed up as him on All Saints’ Day.

Fr. Kevin’s book is available on Amazon and the Ignatius Press web site.