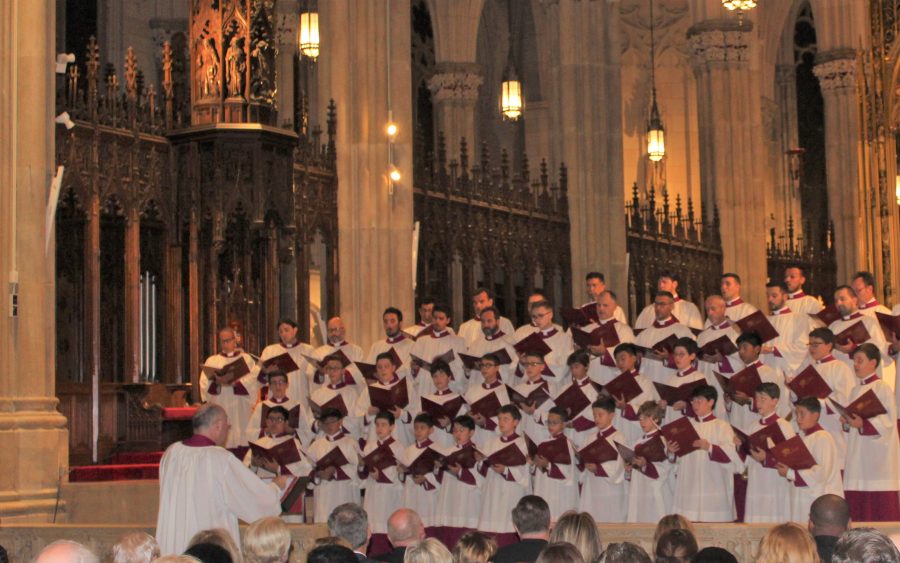 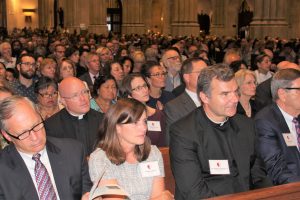 The sacred music of the Sistine Chapel Choir filled St. Patrick’s Cathedral in midtown Manhattan on the evening of Saturday September 16th. 2000 people were in attendance at the standing room only concert which featured 10 pieces of music from the archives of the choir that go back to the fifth century.

The 52 member choir is made up of men and boys who sing at all of the papal liturgies. The boys try out for the choir at a young age and if selected, live at the Vatican where the choir has a boarding school, the Schola Puerorum, where they have their academics and five years of intense musical study.  In a 2013 interview with PRI Media, Maestro Msgr. Massimo Palombella said that “What’s most surprising about these children is that, if you create the right educational climate, they are capable of the highest professionalism,” says Palombella. “I would dare say a level of professionalism that goes beyond adult singers in terms of commitment, motivation, and preciseness.”  The men come from all over Italy, mostly professional singers, who audition for the chance to be a part of this ensemble of voices that has been a thread woven through the Papal liturgies of the last 1500 years.

The music at St. Patrick’s was at times haunting, drawing the listener into an atmosphere of spiritual reflection, and at times powerfully triumphant, evoking the resurrection of Christ and his triumph over sin and death. The evening opened with “Gaudete in Domino,” a Gregorian chant from the ninth century that drew the audience into the performance with its soft polyphony and prayerful tones.  Five of the following pieces were by Giovanni Pierluigi da Palestrina, a 16th century Renaissance composer from Rome who sang at the Basilica of St. Mary Major as a youth, much like the nine to twelve year old boys who make up the Sistine Choir today. 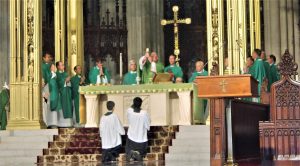 The Pope’s choir is visiting the United States for more than entertainment.  They are on a mission given to them by Pope Francis to advance the ecumenical dialogue between the Catholic Church and other denominations and cultures by sharing their music. Although the choir had not been to the US in over 30 years, it has been touring worldwide, recently in in England, Russia, Germany and several Asian countries.  While in New York the choir also sang at the Episcopal church of St. Thomas, with the St. Thomas Choir of Men and Boys on 5th Ave, considered by many to be the leading ensemble of its kind in the Anglican choral tradition in the United States.  The St. Thomas Choir will return the visit, singing at the Vatican on the feast of St Peter and Paul next year.

Speaking of this mission to build bridges through music where diplomacy may not be enough, Maestro Palombella said that “In singing together the common heritage of our unique praise of God, we express our willingness to walk together and anticipate in history that desired unity, which we all seek and which by the gift of God we will achieve.”

New York culture does not readily identify with the sacred, so the outreach of the choir is a sort of invitation by the Holy See to consider the truths of the Catholic faith through an experience of their beauty.  One concert attendee who travelled from Jacksonville, Florida, Dick Erickson, said “This event is significant because most people here tonight will never make it to Rome to experience beauty like this. The Choir has brought the Vatican to the American people, and in a way connected them to the Pope.” 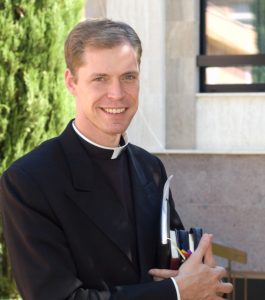 The work behind facilitating a mission of this scale is enormous.  When asked why he spearheaded the organization of the visit of the choir to New York, Fr. Mark Haydu LC quoted Dostoyevsky’s maxim “Beauty will save the world.” Through history, man has found God through art, and God has used art to reach man. Well acquainted with Fr. Mark in his previous role as director of the Patrons of the Arts for the Vatican Museums, it was natural for John Hale from Corporate Travel Services, who oversaw the entire US tour, and Msgr. Palombella to turn to him to ask for assistance in bringing the choir to New York. Fr. Mark approached the Lumen Institute, a Catholic Business Leader’s Group which he serves as their national chaplain, and asked them to consider sponsoring the visit and fundraising for the event. From there they turned to Msgr. Robert Ritchie at St Patrick’s Cathedral and asked him to consider having the Choir at St Patrick’s, which he did.

The Lumen Institute, founded in 2007 by Fr. John Connor of the Legionaries of Christ and three business leaders, is inspired and supported by the Regnum Christi Movement.  Its mission is to help business leaders transform the corporate world by living their core values of character, faith and leadership.  Lumen members take part in ‘Lumen Action,’ service projects meant to impact culture with Christian values.  The enterprising group took the Sistine Choir visit on as a project and committed to funding and promoting the event with the collaboration of the Regnum Christi Movement active in Metro New York. They succeeded not only in fundraising to cover the Choir’s visit, but surpassed their goals and were able to make donations to St. Patrick’s Cathedral and the Novitiate and College of the Legionaries of Christ in Cheshire, Connecticut.

Fr. Mark hopes the event will have a lasting effect in several ways. Having tasted sacred music, he hopes the 2000 people in attendance and the thousands more who viewed the live stream of the event will continue to seek truth and beauty through the arts. He also hopes that the successful collaboration of the Lumen Institute, the Regnum Christi Movement and the Archdiocese of New York will continue and that they can work together to engage and impact the culture for Christ in the future.

Those seeking more of the music of the Pope’s choir can purchase their CD, Cantate Domino, recorded in the Sistine Chapel in 2015.  The recorded live stream of the event from the St Patrick’s Cathedral Facebook page, which was also carried live by the Regnum Christi Movement, can be viewed here.